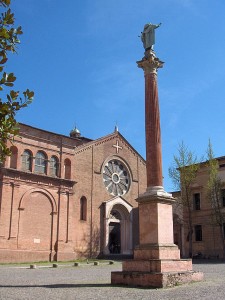 Considering its relatively small size, the city of Bologna boasts a surprisingly large number of architecturally spectacular and historically important churches.  Home to over a half-dozen basilicas, one of the largest numbers in any city outside of Rome itself, Bologna has been a major pilgrimage destination since the Middle Ages.  For most of this period, the primary destination for pilgrims has been the Basilica of St. Dominic, site of the Tomb of Dominic, founder of the Dominican monastic order.  Established by Dominic himself as the order’s headquarters, its location in north central Italy made it easily accessible to the other cities of the region.  Although it does not enjoy the pilgrimage traffic it once did, it is still a religiously important destination for current members of the Dominican order.

Dominic of Osma is one of the great monastic figures of the Roman Catholic Church, and one of its most controversial saints as well.  Born in Spain during years of the Reconquista, he lived in an age when Catholicism was faced with many challenges, both from competing religions as well as Christian heretical groups.  A theological scholar, Dominic committed his life to the Church and joined a monastery in Osma.

Dominic practically stumbled into history while on a diplomatic mission for the Bishop of Osma.  While traveling in Southern France, he had a run-in with the Cathars, a local but growing heretical movement.  The encounter left Dominic with a burning desire to champion the Church and preach against heresy.  In 1215 he founded what would become the Order of Preachers, later known as the Dominicans, with the express purpose of living in poverty and humility and, perhaps more important from a historical perspective, to seek the truth and weed out false teachings in the Church.

His organization quickly became one of the most important anti-heretical instruments of the Church, and though Dominic himself did not realize it at the time, he inadvertently became the founding father of what later became the Inquisition.  After receiving recognition from the Papacy, Dominic established a church in Bologna, Italy as his order’s headquarters.  He died there in 1221.  After his death, the church was greatly expanded and redesignated as a full-fledged basilica.  His body was interred there in 1267.

Although Dominic himself had little if anything to do with the future Inquisition, it has unfairly tainted his legacy.  An implacable foe of heresy, he was known for his fairness and intelligence.  The church that he founded in the 13th century is still standing in Bologna to this day.  Despite a few additions over the years and renovations in the 18th century, the Basilica of St. Dominic is still essentially intact in its medieval form.  Although no longer the headquarters of the Dominicans, it is still that order’s most sacred shrine, and the most important church building in Bologna.

From the exterior, the Basilica of St. Dominic is a relatively unassuming place, just as the Dominicans would have known it the 1200s.  The brown-brick, fairly plain Romanesque façade utterly belies the interior of the place.  A belltower was added in 1313.  In the relatively small plaza in front of the church stands a column crowned with a statue of Dominic, the only real indication on the outside of the special nature of the church.

The interior is a Renaissance masterpiece.  Reworked in the 15th and 16th centuries by Italian artisans that included such luminaries as Michaelangelo, it is a feast of marble, gold leaf and frescoes.  Nearly two dozen chapels line the place.  The historic and artistic highlight of the place, not surprisingly, is the Chapel of St. Dominic, where the remains of the saint rest in a simple sarcophagus.  Adjacent to the church is a small museum holding some of the Dominican’s treasures, including the golden reliquary of King Louix IX of France.

The Basilica of S. Dominic is a few blocks from the Basilica of St. Petronio on the south side of the old town of Bologna, approximately 90 miles southwest of Venice and 230 miles north of Rome.  It is open daily from 7:00am-8:00pm.  There is no charge for admission.  Web: www.arcadominici.org (official website)

Bologna boasts a dozen fantastic churches, including the unfinished Basilica of St. Petronia, one of the largest churches in the world (its incomplete façade is particularly interesting to view).  There is also the Cathedral of Bologna, plus five other full basilicas.  The most popular church, however, is the Sanctuary of the Madonna of St. Luke, home to a miraculous painting of the Madonna and Child supposedly executed by none other than Luke the Evangelist.