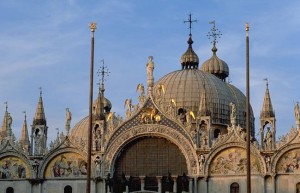 Thanks to the efforts of a few dedicated and clever Venetian merchantmen, the city of Venice came into possession of one of the worlds’s greatest relics in the 9th century.  The body of Mark, one of most important early Christians and author of one of the four Gospels of the New Testament, is among the very few New Testament corpses that almost certainly belongs to the person it is supposed to be.  In terms of prestige, this puts it in the company of the remains of the Peter and Paul at the top of the Christian relic heap.  The spectacular Basilica that was built to showcase the tomb was one of the most richly decorated and costly church buildings yet constructed at the time.  It remains to this day one of Catholicism’s most important sites, and is one of Venice’s most popular attractions.  The Basilica of St. Mark is part of the Venice UNESCO World Heritage Site.

Mark the Evangelist was an early traveling companion of Paul and Barnabas, and was in all likelihood an acquaintance of Peter as well.  After years of working with Paul to spread the Gospel, Mark settled in Alexandria where he became the city’s first bishop.  At some later point in his life, Mark penned a sixteen chapter book on the life of Jesus of Nazareth, a work which was ultimately included in the Bible as one of the pivotal four Gospels around which the New Testament was eventually formed.  Sometime around 68 AD Mark was martyred by a mob led by pagan priests.  His body was recovered by his fellow Christians and interred in a church in Alexandria.

During the 7th century, Alexandria was overrun by the armies of Islam.  While the Christians of Egypt were reasonably tolerated, they lived under constant threat of harassment and persecution.  By the end of the 9th century, a showdown between the Christian west and the Islamic east was looming.  Fearing for the security of their beloved relic, the body of Mark, or at least most of it, was exhumed and smuggled out of Egypt by Venetian merchants.  Reportedly, the body was hidden inside a crate of pork in order to keep Muslim customs officials from investigating too carefully.  It was brought back to Venice, well inside Christian territory, after which the city’s prestige as a religious center skyrocketed.  A massive basilica was constructed to house the relic, and pilgrims poured into the city.

By the time of the Crusades, Venice had become the preeminent commercial and economic center of the Mediterranean world.  It also became a hotbed of religious intrigue.  Located at the crossroads of the Orthodox east and Catholic west, Venice ultimately thew in its lot with the Papacy.  Under questionable Papal authority, Venice seized sizeable tracts of Byzantine territory.  They also encouraged the armies of the Fourth Crusade to sack Constantinople, their chief commercial rival, rather than do battle with the Saracens.  For centuries the Venetian navy and merchant fleet reaped massive profits while supporting the Crusades, gaining more wealth and power than any other state or organization, including the Templars.

At its height Venice was the wealthiest city in the western world, and huge sums were lavished on gilding and embellishing the city’s basilica.  Pilgrims in the hundreds of thousands came to visit the shrine, including many on their way to visit the Holy Land.  Throughout Europe, only the Tombs of Peter in Rome and James in Spain ranked higher in importance.  Unfortunately, with the rise of the Ottoman Empire, the fall of Constantinople and the opening of Atlantic sea trade routes in the 15th century, Venice’s political importance came to an end almost overnight.  However, Venice remained an important military buffer against the Ottomans as well as an important religious buffer against the Reformation.  Today Venice and the Basilica of St. Mark remain among the most important and most visited Christian sites in Italy.

Built when Venice was still under the architectural influence of the Orthodox east, the Basilica of St. Mark is a triumph of late Byzantine architecture.  Originally constructed in the 9th century, much of the church dates from later restorations.  The façade of the church is somewhat unique among Christian architecture, appearing more like an oriental pleasure palace, with five large arched entranceways and a high balcony that spans the entire length of the face.  The four horses adorning the façade above the central arch are almost two thousand years old, and were brought back as loot from the sacking of Constantinople (actually, the originals are now on display inside the church; those above the gate are replicas).  The whole is crowned with a trio of enormous domes.

The Basilica’s interior is one of the most richly decorated in the world.  Large portions of the church sanctuary are gilded from wall to wall.  Whatever isn’t covered in gold leif is richly adorned with artwork and frescoes.  In many places, figures simply adorn the walls independent of background, a highly unusual style for time.  The main altar is partially screened.  The tomb which contains St. Mark’s relic lies beneath.  There is a small museum and treasury inside the church which house collections of related Christian artifacts.

The Basilica of St. Mark dominates the Piazza San Marco on the southeastern side of Venice.  Reaching the basilica through the city’s labyrinth of alleyways is not too difficult thanks to the considerable signage pointing the way.  The basilica is open Mondays through Saturdays from 9:45am-5:00pm, and Sundays and holidays from 2:00pm-5:00pm.  There is no cost of admission.  There are extra charges for entrance to the museum and the treasury.  Web: www.basilicasanmarco.it (official website)

Venice is home to a number of other superb churches built with the vast wealth from the city’s medieval commercial activities.  Many of the city’s rulers are buried in the Chiesa Di Santissimi Giovanni E Paolo.  The Basilica Di Santa Maria Gloriosa Dei Frari is adorned with great works of Renaissance art, including pieces by Donatello and Titian.