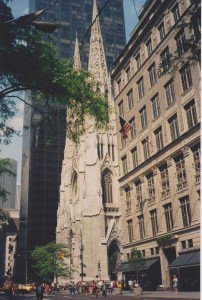 St. Patrick’s Cathedral is one of the greatest churches in the world.  As the seat of America’s most prominent archbishopric as well as one of the Cardinals of the Roman Catholic Church, it is effectively the most important Catholic cathedral in the United States.  Thanks to its incomparable location on Fifth Avenue in the heart of New York City, it is also far and away the most visited, and overcrowded, church in the United States.  St. Patrick’s Cathedral is also the host church of the annual New York City St. Patrick’s Day Parade, one of the largest catholic feast celebrations in America.

St. Patrick’s Cathedral had a surprisingly humble beginning in the first half of the 19th century.  A diocese was created in New York in 1808.  During the 1810s, the site where the cathedral now stands was home to a Jesuit community and later to Trappist monks, largely of French ancestry.  After the end of the Napoleanic Wars, the Trappists left and the site largely was mostly unused for several decades, except for a Catholic-run orphanage that was maintained. 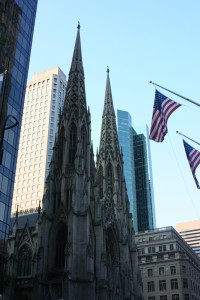 In 1830s Catholic immigrants from Ireland began pouring into New York, and the site was revived for use.  After years of wrangling and financial difficulties, it was decided that a new cathedral would be built on the site in order to replace the Old St. Patrick’s Cathedral in lower Manhattan.  In 1850 New York became an Archbishopric, and in 1858 construction began on the new cathedral.

Following an interruption of construction during the American Civil War, the cathedral was essentially completed and dedicated in 1879, though work continued for another decade before the spires were added.  Not surprisingly, the new cathedral became a beacon for the fresh waves of catholic immigrants from Ireland and elsewhere arriving in New York at the turn of the century. 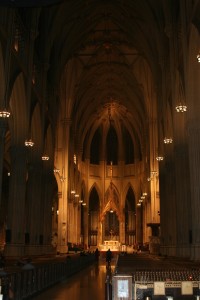 Since its completion, St. Patrick’s Cathedral has had a colorful past and has been home to some of the most prominent Roman Catholic clergymen in American history.  It has been the site of several Papal visits, and many prominent funerals have taken place here.  In 1990, Pierre Toussaint, a hero of the Haitian Revolution, was re-interred in the cathedral.  Although New York’s world famous St. Patrick’s Day Parade dates back to the 18th century, it has been associated with the cathedral since the late 1800s and is by far the city’s largest annual catholic feast celebration.

St. Patrick’s Cathedral is one of the world’s greatest examples of Gothic Revival architecture.  The cathedral is huge, and was the largest church in the Western Hemisphere at the time of its completion.  Thanks to its immensity and spectacular façade, St. Patrick’s Cathedral manages to dominate its stretch of Fifth Avenue despite being dwarfed by modern-day skyscrapers.  One external feature that the cathedral is closely associated with is the giant statue of Atlas holding up the sky just across the street at Rockefeller Center.

The interior of the cathedral is even more awe-inspiring than the exterior.  It features one of the highest vaulted ceilings in the United States, one of the largest organs, and some of the finest stained glass anywhere, some of which was produced by Tiffany & Co.  A number of archbishops and cardinals are interred inside the cathedral, as well as Haitian hero Pierre Toussaint, whose body was moved here 1990, nearly a century and a half after his death.

St. Patrick’s Cathedral is located on Fifth Avenue in the heart of Midtown Manhattan in the center of New York City.  It is open every day, and tours are available.  There is no cost of admission.  The cathedral is undergoing a massive renovation at the present time so there may currently be restrictions to visiting.  Web: www.saintpatrickscathedral.org (official website).

There are over eighty Roman Catholic churches and cathedrals in Manhattan alone.  Among those of particular interest are St. Patrick’s Old Cathedral and the Church of St. Peter, both in Lower Manhattan.  The latter is the oldest Roman Catholic Church in New York and became famous as a staging area after the terrorist attacks of September 11th.