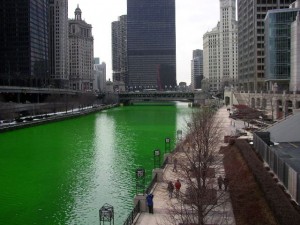 Chicago is the largest city in the Midwest, and is home to one of the largest Irish-Catholic populations in the country.   Irish immigrants have lived in Chicago since the mid-1800s, and in fact Old St. Patrick’s Church is one of the few buildings in the city that survived the 1871 fire.  The city has been celebrating St. Patrick’s Day for well over a century, and is home to one of the feast day’s iconic events: the dyeing of the Chicago River.

Every year on March 17th, the Chicago Journeymen Plumbers Union Local 130 sponsors and oversees the coloring of the Chicago River.  Tens of thousands of spectators watch as the river water turns emerald green.  This event is followed by the city’s massive St. Patrick’s Day Parade.  A second and more traditional parade also takes place in Chicago’s south side, which is the city’s predominantly Irish Catholic neighborhood.

Scranton is home to the oldest St. Patrick’s Day Parade in the Midwest.  It is also the second largest in the United States based on per capita population (after Savannah), making it the biggest civic event in Scranton annually.  Over 12,000 citizens participate, not including spectators.  The parade has taken place annually since 1862.

The St. Patrick’s Day celebration is an all-day event that usually takes place on the Saturday before the actual feast day.  It begins with mass at the city’s St. Patrick’s Cathedral and is followed by a foot race and then the parade.  The parade is sponsored and organized by the St. Patrick’s Day Parade Association of Lackawanna.

Buffalo has a vibrant Irish population that dated back to the 19th century, and hosts several very popular parades.  The official city St. Patrick’s Day Parade has been running since the 1940s, while the more traditional Old Neighborhood Parade in the city’s First Ward is now in its third decade.  But a small block celebration hosted by a local pub has become the city’s trending destination.

Talty’s Tavern hosts what they claim to be as the world’s shortest St. Patrick’s Day Parade – a route that only lasts one block.  For purposes of full disclosure, it is worth mentioning that the world’s shortest St. Patrick’s Day Parade is also claimed by Hot Springs, Arkansas.  Unfortunately, the street lengths were not available for comparison.  Nevertheless, no other city north of the Mason Dixon line is vying for this distinction.

Cleveland’s St. Patrick’s Day celebration is among the largest in America for a mid-size city (on par with that of Savannah).  The city’s parade, which dates back to 1867, now features over fifteen thousand participants and as many as half a million spectators.  It is held annually on March 17th regardless of the day of the week.

For over a century the original St. Patrick’s Day celebrations in Cleveland centered on the Westside, where the City’s Irish population was historically concentrated.  But due to the immense popularity of the event and huge crowds it now runs through the city center.

Four cities on the Illinois-Iowa border share this interesting St. Patrick’s Day parade and celebration, considered to be among the nation’s finest for a small market.  This area, which includes Bettendorf and Davenport in Iowa and Moline and Rock Island in Illinois, is home to a large Irish population which collectively sponsors this unique parade.

The parade begins in Rock Island, crosses the Centennial Bridge which spans the Mississippi River, and continues on to Bettendorf.  Due to the small size of the host area, the Quad Cities Parade is particularly known for family friendliness.

Detroit, Michigan – St. Patrick’s Day has been celebrated in Detroit since the first Irish settlers arrived in the early 19th century.  The first documented feast was held here in 1808.  The city’s annual parade dates back to 1959.

Syracuse, New York – St. Patrick’s Day in Syracuse is one of the longest annual celebrations of the holiday, with festivities technically running for three weeks every year (according to tradition, the holiday begins with the delivery of green beer to Coleman’s Irish Pub on the last Sunday of February).