You don’t have to be Irish or Catholic to celebrate St. Patrick’s Day, the most popular of Catholic feast days in the United States.  However, it does help if you live in the northeast.  Let’s face it: when it comes to St. Patrick’s Day, its places like Boston, Philadelphia and Buffalo which usually grab the spotlight, not to mention New York City and its massive celebration.  So where’s a southerner to go on March 17 to get his or her Irish on?  Turns out, the South has some excellent St. Patrick’s Day blowouts as well.  Here are five of the best: 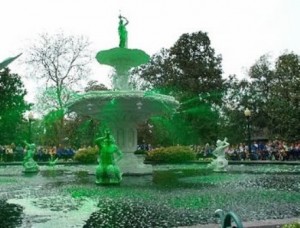 The port of Savannah has welcomed Irish immigrants for almost as long as any other city in America.  It is therefore not surprising that the Hostess City boasts the oldest and largest St. Patrick’s Day celebration in the South.  Irish immigrants began arriving in the area around 1800, settling in the port cities of Charleston and Savannah.  St. Patrick’s Day soon followed in their wake, with known celebrations in Savannah as early as the 1810s.

Today Savannah boasts one of the largest Irish-American populations below the Mason-Dixon Line, and the city pulls out all the stops on March 17th.  The main event is the city’s parade, which runs through the scenic historic district.  Dating back to 1813, it is one of the more prestigious.  In recent years it has featured dignitaries and politicians from the old country.  Another popular tradition are the waters of the city’s fountains, which are dyed green for the event.  In recent years the event has drawn crowds upwards of 400,000, making it the city’s largest party of the year. 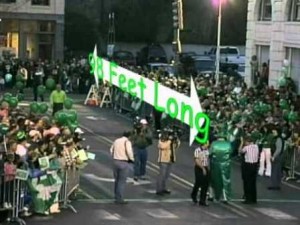 Back in the 1940s, the good people at Ripley’s Believe it or Not recognized Bridge Street in Hot Springs, Arkansas as the shortest street in America.  About ten years ago, the folks of Hot Springs designated Bridge Street as the site of the World’s Shortest St. Patrick’s Day Parade.  Amazingly, what began almost as a joke has turned into a fairly substantial regional event, and the most famous St. Patrick’s Day celebration in the Ozarks.

Considering its claim to be the “shortest” St. Patrick’s Day Parade in the World, the size of the event is less than modest, and growing less modest every year.  Recent parades have even attracted a surprising array of celebrity grand marshalls.  There are the traditional bagpipe bands and floats, as well as the less than traditional belly dancers and a team of Irish Elvis Presley lookalikes. 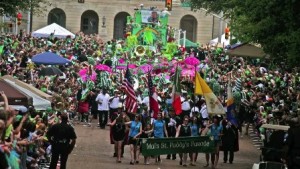 Take St. Patrick’s Day, add a touch of the Big Easy, an army of aging southern belles and a mountain of sweet potatoes, and what you get is Mal’s St. Paddy’s Parade in Jackson.  Founded by Malcolm White in the 1980s, this strange hybrid celebration of Irish and southern heritage has become one of the largest annual events in Mississippi and possibly the most famous St. Patrick’s Day festival west of Savannah.

But make no mistake: it’s not St. Patrick who is the star of Mal’s, or even beer.  It is the humble sweet potato.  The parade, which is presided over by a gaggle of not-quite-so-young southern ladies known as the Sweet Potato Queens, features Mardi Gras-style bands and floats in addition to bagpipes.  However, spectators beware: those aren’t bead necklaces being tossed from to the crowds.  Those are sweet potatoes. 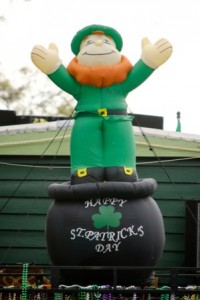 After the bacchanalia that is Mardi Gras, New Orleans barely has time to catch its breath before its time to get ready for the next party.  It probably comes as no shock that the second largest St. Patrick’s Day celebration in the south occurs here.  It is also one of the oldest Irish celebrations in the south, with a parade tradition that dates back to 1809, which is actually older than the parade in Savannah.

Not surprisingly, the New Orleans celebration of St. Patrick’s Day is reminiscent of the city’s Mardi Gras parties, if not an outright smaller green clone.  There are multiple parades in the week leading up to March 17, usually featuring recycled floats, and of course, bead necklaces.  One of the more unique local traditions is the final event, the Louisiana Irish-Italian Parade, which celebrates the feasts of both St. Patrick and St. Joseph. 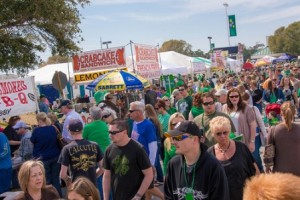 Okay, this is not one of the bigger, older or most popular St. Patrick’s Day celebrations; but it is one of the most charming and family friendly.  Besides, with a name like Emerald Isle, how could you go wrong?  Interestingly, the residents of this Oceanside resort town did not start capitalizing on their name until the 1990s, when the Emerald Isle St. Patrick’s Festival was inaugurated.  It is now the island’s biggest event outside of the summer tourist season.

The Emerald Isle St. Patrick’s Festival is a very family-oriented event.  More of a street fair than a traditional celebration, it features amusements and vendors rather than a parade.  Emerald Isle also boasts what is quite possibly the most adorable St. Patrick’s Day tradition anywhere: the Little Miss and Mister Leprechaun Contest, featuring tiny green-glad Irish wannabees ages five and under.