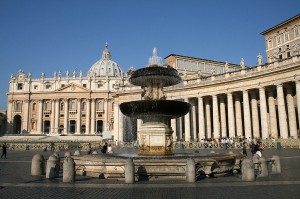 St. Peter’s Basilica is the great cathedral of the Vatican, the world’s smallest sovereign state, and the last surviving remnant of an immense Christian Empire that once spread to every corner of Europe.  In the aftermath of the Islamic conquest of Jerusalem in the 7th century, the site of Peter’s martyrdom and burial became the most popular, or at least the most accessible, major Christian pilgrimage destination of the Middle Ages.  It is believed that over the last two thousand years, more Christian pilgrims have visited Rome than any other city, including Jerusalem.  Built on the site where Peter was crucified, the magnificent basilica dominates the tiny Catholic enclave.  This shrine of Peter, the Prince of the Apostles, continues to draw millions of Catholic pilgrims to Rome every year, and may be the world’s most visited Christian holy site.  It is one of the seven ancient pilgrimage churches of Rome, one of five Patriarchal Basilicas (representing Constantinople) and one of only four cathedrals in the world to bear the distinction of being a Basilica Major.  St. Peter’s Basilica is part of the Vatican City UNESCO World Heritage Site.

Some time around the mid-1st century AD, the Apostles of Jesus of Nazareth went forth from Judea to spread the Gospel.  As the chief Apostle, it ultimately fell to Peter to travel to Rome, the greatest city in the western world and capital of the Roman Empire.  There he spent the later days of his life preaching and winning converts for the Church.  However, in the wake of a terrible fire which destroyed much of the city in 64 AD, the Emperor Nero implicated the Christians in a desperate effort to divert attention from himself.  The Christians of the city were seized, including Peter, and cruelly put to death.  Most were sacrificed and devoured by animals in the Colliseum, but Peter was crucified upside-down upon Vatican Hill, where he was later buried with many of his contemporaries in a mass grave.

Even from the earliest days of the Church, the symbolic importance of Peter’s gravesite was recognized by the Christians of Rome.  Many of his successors were buried nearby, making the Vatican Hill one of Christianity’s most desireable early graveyards.  Shortly after Constantine’s legalization of Christianity in the 4th century, the first church was constructed over the site.  Now known as Old Saint Peter’s Basilica, it dominated the Roman skyline for over twelve centuries.  Christian pilgrims began visiting the basilica almost as soon as it was completed.  Its greatest moment from a historical perspective occurred in the year 800, when Charlemagne accepted the title and crown of Holy Roman Emperor from the Pope here.

By the time the Crusades were underway, Old Saint Peter’s Basilica was showing signs of its age.  The basilica’s deterioration accelerated during the Avignon Papacy, when the holy shrines of Rome were neglected for the better part of a century.  However, by this time the Church had grown very wealthy, and in the 1400s it was decided that old St. Peter’s would be torn down and completely rebuilt.  Despite protests from the local Christian community and the difficulty of having to deal with literally thousands of corpses buried within and beneath the old basilica, work began in 1506.  It took more than a century to complete.

The Church took full advantage of the proximity and availability of the many great Renaissance artists and architects resident in Italy.  Among the countless artistic luminaries who contributed to the work were Bernini, Botticelli and Michelangelo.  The result was the most spectacular Christian edifice ever built, an honor which it maintains to the present day.  On November 18, 1626, the new Basilica of St. Peter was consecrated by Pope Urban VIII.  However, work continued on the interior details and other architectural elements such as St. Peter’s Square through much of the rest of the 17th century.  Today the basilica stands not only as a momumental testament to St. Peter and the Roman Catholic Church, but also to Renaissance architecture and to Christianity as a whole.  St. Peter’s Basilica remains to this day the greatest Catholic pilgrimage destination in Europe and probably the most visited Christian site in the world.

St. Peter’s Basilica, the architectural masterpiece of the Italian Renaissance, is the grand champion of all of the world’s churches in terms of size and splendor.  Strictly speaking, however, it is neither the world’s largest church, which is the Basilica de Notre Dame de la Paix in the Ivory Coast, or even the official church of the Bishop of Rome, which is the Basilica of St. John Lateran across town.  Built largely during the 16th and 17th centuries, every architectural aspect of St. Peter’s Basilica is unrivaled.  In front of the Basilica is the immense St. Peter’s Plaza, circumscribed by a massive colonnade and crowned with the statues of a hundred and forty saints.  The obelisk at the center of the plaza was hauled back as booty from Egypt.  Several giant bronze portals offer entrance to the Basilica.  The Holy Door in the center is only opened on special occasions.

The interior is an unparalleled work of art.  Every inch of the massive sanctuary is visually overwhelming, from the extensive marblework to the soaring columns to the gilt archways and ceilings.  Among the artisans who contributed design elements were Antonio Averulino, Andrea Bolgi, Sandro Botticelli, Agostino Cornacchini, Antonio Canova, Arnolfo di Cambio, Giacomo Manzu and Francesco Mochi.  The greatest contributors, however, were Michaelangelo, who oversaw much of the construction, including the great dome; and Gian Bernini, who designed some of the basilica’s greatest interior elements, including the central altar known as the Baldacchino.  The true treasures of the Basilica of St. Peter lie beneath the altar and sanctuary, in the Vatican Grotto, where St. Peter is buried along with ninety-one Popes and a handful of other prominent figures of the Church.  Veronica’s Veil, one of the most hallowed of all Christian artifacts, is kept in storage in one of the basilica’s chapels.

St. Peter’s Basilica, designed to instill awe in visiting pilgrims, still dominates the skyline of west side of the city of Rome.  Its doors are open every day to Catholics and non-Catholics, Christians and non-Christians alike.  The basilica is open every day April-September from 7:00am-7:00pm; October-March from 7:00am-6:00pm.  Hours for the Cupola, Treasury and Grottos are more limited, and visitors are advised to check these in advance.  Mass is held in the main sanctuary and the various chapels numerous times every day.  There is no cost of admission to the main basilica.  There may be extra charges for the Cupola, Treasury and Grottos.  Web: www.vatican.va/various/basiliche/san_pietro (official website)