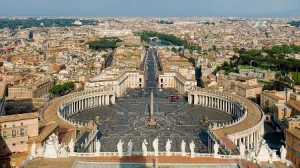 St. Peter’s Square is the magnificent, colonnaded plaza which welcomes visitors and pilgrims from all over the world to Vatican City, the home of the Papacy and the headquarters of the Roman Catholic Church.  Every year during the Christmas holidays, the Square is host to an absolutely magnificent Nativity Scene, arguably the finest in the world, and which plays a prominent role in the Papal Christmas Eve services.  Interestingly, the Vatican Nativity Scene is a relatively new phenomenon which only dates back to the 1980s.  However, in the three decades since it began to appear each Christmas, it has become wildly popular, and it looks as though it is now a permanent fixture of the Vatican’s holiday celebrations.

The Vatican Hill has been home to the Papacy since early Christian times.  According to tradition, Peter the Apostle was martyred here in the 1st century and is buried somewhere beneath the vast complex.  Most of modern day Vatican City was rebuilt in the 16th and 17th centuries.  Among its architectural treasures are St. Peter’s Basilica, the world’s largest (by most measures) cathedral; the Apostolic Palace; and the Sistine Chapel.

St. Peter’s Square is the main gateway between Vatican City and the rest of the city of Rome.  Designed and built by Bernini in the late 17th century, it is circumscribed by an immense marble colonnade and crowned with the statues of over a hundred saints.  At the center of the plaza is an Egyptian obelisk that once stood in the Circus of Nero where Peter was martyred.  Every year in December the enormous Nativity Scene and accompanying giant Christmas Tree is set-up in front of the obelisk.  Pieces and figures of the scene are handcrafted by artisans, notably from the city of Tesero in Italy, and either loaned or donated to the Vatican.  The Creche changes every year, with different figures, styles and themes.  In previous years after mass on Christmas Eve, the Pope would carry the figure of the Christ child out onto St. Peter’s Square and ceremoniously places it in the manger at the climactic moment of the night.  Today, the figure is covered with a white cloth which is removed on Christmas Eve. 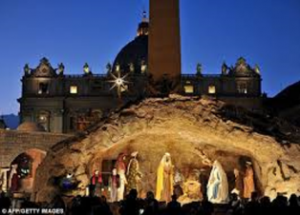 Vatican City is located on the west side of the city of Rome and is technically an independent state. Its doors are open every day to Catholics and non-Catholics, Christians and non-Christians alike.  The basilica is open every day April-September from 7:00am-7:00pm; October-March from 7:00am-6:00pm.  Mass is held in the main sanctuary and the various chapels numerous times every day.  There is no cost of admission to the main basilica.  There may be extra charges for the Cupola, Treasury and Grottos.  Web: www.vaticanstate.va/content/vaticanstate/en/monumenti/basilica-di-s-pietro.html# (official website of St. Peter’s Basilica)