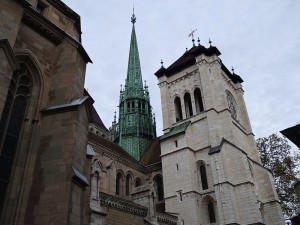 While Wittenberg is honored as the birthplace of the Protestant Reformation, it was Geneva that served as the unofficial headquarters of Reformation activity throughout the better part of the 16th century.  Although he was not a Lutheran, John Calvin took up the banner of the Reformation in the years following Martin Luther’s death as the next great Protestant leader.  His home and church in Geneva became a rallying point and ecclesiastical center for Protestants, including Calvinists, Anabaptists, Hugenots and others.  St. Pierre’s Cathedral in Geneva was second in importance only to the Castle Church in Wittenberg during the early years of Protestantism.  The Cathedral and the nearby King’s Cemetery where John Calvin is buried are now among the most popular Protestant pilgrimage destinations in Central Europe.

John Calvin was born less than a decade before Martin Luther posted the Ninety-Five Thesis, and by the time he received his doctorate degree in 1532 the Protestant Reformation was well underway.  Swept up in the anti-Catholic fervor of the time, Calvin found himself on the Protestant side of the religious debate then raging throughout Europe.  In 1536 he relocated to the increasingly pro-Reformation city of Geneva, where, with the exception of a brief sojourn in Strasbourg, he remained for the rest of his life.

While Calvin accepted the general tenets of the Protestant movement, he did not always agree with Lutheran philosophy.  After settling down in Geneva, he began to organize his religious ideas along slightly different lines than Luther.  Among the major differences was a greater emphasis on humanism, as well as belief in predestination.  By the 1550’s Calvin’s following had grown large enough to become a separate and distinct entity from the Lutherans, making them the second major independent Protestant denomination.  John Calvin spent the remainder of his life securing Western Switzerland for Protestantism.  It became a haven for foreigners who fled their homelands in search of sanctuary during the Reformation, including John Knox, who after spending time with Calvin returned to Scotland and founded the Calvinist Church of Scotland.

During Calvin’s lifetime, Geneva came to be known as the Protestant Rome.  In 1539 he married, putting an end forever to his priesthood and finalizing his separation from the Roman Catholic Church.  He died in 1564.  After his death, Geneva expanded its role as a Protestant stronghold.  In an attempt to retake the city for Catholicism, the army of Savoy briefly laid siege to Geneva in 1602.  The war was soon aborted for a number of reasons, not the least of which was the near-fanatical defense of the city by the Protestants.  Interestingly, Geneva managed to escape the carnage of the religious wars of the early 17th century.

In later years, except for a temporary annexation by France during the Napoleonic Wars, Geneva remained a steadfast champion of both Protestantism in Central Europe and an independent Switzerland.  Today Geneva and Switzerland are renowned throughout the world as a bastion of peace and neutrality.  Some locals claim that this is due in large part to their Calvinist heritage.  Geneva certainly boasts its share of major religious organizations, and is home to the World Council of Churches, the world’s largest Protestant organization.  The tradition of John Calvin remains a treasured part of the city’s heritage, and his church is the most revered Protestant place in Switzerland.

The St. Pierre Cathedral was originally constructed in the 12th century as the parish church of the City of Geneva.  It was appropriated by the Protestants shortly before Calvin arrived, and later rededicated for use by the Reformed Church of Switzerland.  The main building was constructed during successive periods which included several post-Calvin remodelings. It now features a mélange of Gothic, Romanesque and Classical designs.  The interior of the church houses a number of historical treasures, including the excavated remains of a 4th century basilica and John Calvin’s favorite chair.

Nearby is the King’s Cemetery, originally a graveyard for Geneva’s elite.  John Calvin was interred here at the time of his death.  Although he wished to be buried in secret at an unmarked grave, his followers decided that he should receive at least some minimal tribute, and marked his tomb with a simple stone that reads only his initials J.C.  This humble gravesite is now the biggest religious draw in Switzerland.

The St. Pierre Cathedral stands at the heart of Geneva’s Old Town not too far from the Hotel de Ville.  It is open October through May from 10:00am-5:00pm and June through September from 9:30am-6:30pm (opening time on Sundays is at noon).  There is no charge for admission.  Web: www.saintpierre-geneve.ch (official website)

While there are many other churches in Geneva, it is the city’s museums and organizations that boast the highlights of the city’s rich religious heritage.  Among these is the International Museum of the Reformation, with a sizeable collection of artifacts from the Calvin period, as well as an underground tunnel to the St. Pierre Cathedral.  There is also the International Red Cross Museum, dedicated to one of the world’s greatest Christian founded relief organization.  Geneva is also home to the international headquarters of the World Council of Churches, the world’s largest Protestant organization.