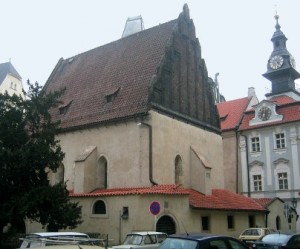 While virtually every major city in Eastern Europe has been home to a Jewish ghetto at some point in the past, none are so well known or as breathtaking as the ghetto in Prague.  Home to the legendary creature known as the Golem, the Prague ghetto boasts the best preserved medieval Jewish neighborhood in Europe, including the Staranova Synagogue, one of the oldest fully functioning synagogues in the world.  A full half-dozen synagogues, community buildings and a very full Jewish cemetery paint a superb and one-of-a-kind portrait of what Jewish life was like in Eastern Europe in the late Middle Ages.  The Staranova Synagogue is part of the Historic Center of Prague UNESCO World Heritage Site.

The Jewish community in Prague dates back at least to the 10th century AD, and possibly even earlier, when merchants and traders arrived under the auspices of the early Holy Roman Empire.  Prague was visited and mentioned by prominent Jewish travelers from Spain as far back as the year 965.  The community’s early years were likely peaceful and prosperous, a brief period before the prejudices of Latin and Germanic Europe made their way eastwards into the Slavic regions.  The city’s first major pogrom took place in 1096, and soon after many of the city’s Jews began to gather in the small district now known as Josefov for their own safety.

During the middle ages, the Jewish district of Prague became one of the most prominent in Eastern Europe.  The district’s population soared to nearly twenty thousand, and the neighborhood became packed with tall houses crowded around narrow lanes.  The city’s famous Staranova Synagogue was completed in 1296 AD, and has been open for business ever since.  The Jewish community’s darkest day occurred a century later, in 1389, when over a thousand Jewish inhabitants were massacred by their neighbors on Easter Sunday.

The Prague ghetto reached its peak in the 16th century during the incumbency of its greatest mayor, Mordecai Maisel.  In addition to his financial acumen and his ambitious building programs, Maisel cultivated close relations with several key Christian leaders of Bohemia.  Unfortunately, the fruits of his efforts were undone a mere generation later, when the Bohemian Revolt kicked off the Thirty Years war.  Caught between violent Catholic and Protestant rivals, the Jews of Prague suffered at the hands of both every time the city changed hands.  The legend of the Golem, a mythical monster supposedly created by a popular rabbi to defend the Jews of Prague from their enemies, arose around this time.

As the age of religious wars waned, the lives of Jews in Prague became easier.  In 1781, the Holy Roman Emperor Joseph II issued the Edict of Toleration, which put an end to many of the more odious laws which had restricted Jewish life.  The ghetto waned in importance and many Jews moved out.  By the early 20th century, much of the old Jewish Quarter was demolished.  The small remaining area, which included the Staranova Synagogue, had a strange savior.  During the German occupation of Prague in World War II, the Nazis, supposedly under the direction of Joseph Goebbels, spared the Jewish Ghetto of Prague and even spent money to renovate some of the buildings as an open-air museum in memory of an extinct race.  This strange legacy of the Nazis is now one of the best preserved and most visited Jewish sites in Eastern Europe.

The Prague Jewish Quarter, known locally as the Josefov district, consists of barely more than half a dozen city blocks, most of which are enclosed by the walls of the old Jewish cemetery.  The district is dominated by the old town hall and a half-dozen beautiful synagogues which span the architectural spectrum from the 13th through the 18th centuries.  Most of these are now functioning museums.  The walled Jewish cemetery is extremely crowded with tombstones literally piled one on top of the other.  The earliest known grave dates back to the 15th century, and it is estimated that anywhere from ten to twenty thousand people are buried in an area of approximately two city blocks.

The Jewish ghetto’s most famous and beloved building is the 13th century Staranova Synagogue.  The name literally means ‘old-new’, suggesting that an older synagogue predated it and a newer new synagogue existed at some point later on.  A substantial gothic building, it appears more like a fortified medieval church, with thick walls and few windows.  The interior is similarly church-like, with high-vaulted ceilings.  Above the main sanctuary is an attic that is inaccessible to the public.  According to tradition, the body of the Golem rests there, waiting for the day when it is called once again to protect the Jewish people.

The Josefov district occupies several blocks near the bend of the Vltava River just north of the city’s Old Town.  The streets and alleys of the ghetto are public and always open.  The main alley which runs along the inner wall of the cemetery is pedestrian only and filled with shops and souvenir carts.  The museum buildings, synagogues and cemetery are open daily from 9:00am-4:30pm (6:00pm in the summer) except on Saturdays and Jewish holidays.  Cost of admission is Kc300 (the Staranova Synagoge is an additional Kc200).  Web: www.synagogue.cz (official website)

While the Staranova Synagogue is the chief attraction, it is only one of six historical and architecturally diverse synagogues in the ghetto.  The others include the High Synagogue, the Klaus Synagogue, the Maisel Synagogue and the Pinkas Synagogue, all of which date back to the 16th century; and the 19th century Spanish Synagogue.  Other buildings of interest are the Town Hall with its distinctive Hebrew clock (it runs counter-clockwise), and the Ceremonial Hall, which appears to date back to the middle ages, but is in fact only a century old.