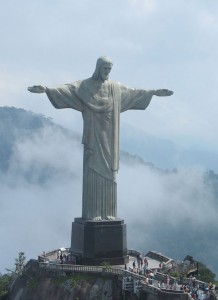 The nation of Brazil boasts the world’s largest Catholic population it as well as the world’s most famous Catholic icon: the Statue of Christ the Redeemer.  Standing upon the crown of Corcovado Mountain overlooking Rio de Janeiro, the statue has become the most recognized and famous symbol of Christianity in all of Latin America.  So spectacular is the site of Christ the Redeemer looming over the city that the oceanview of Rio de Janeiro is consistently rated one of the most beautiful in the world.  In 2007 the statue was voted one of the New Seven Wonders, the only Christian site on Earth to be so honored.  Today it is one of the most popular tourist destinations in Latin America and a must-see for every visitor to Rio de Janeiro.

The city of Rio de Janeiro was founded in 1565, more than a half-century after first being discovered by Portuguese explorers.  Christianity and the Catholic Church arrived soon afterwards.  However, it was not until the mid-1700s that Rio de Janeiro raised to political and economic prominence.  During Rio’s great economic boom of the 18th and 19th centuries the city was adorned with churches and cathedrals.  One of the largest and most important was the Church of Our Lady of Mount Carmel, which would later become the city’s cathedral.  It would also serve as the Royal Chapel of the Portuguese monarchy for a brief time in the early 1800s, the only church outside Europe to ever be so honored.

As capital of Brazil for the better part of several centuries, Rio de Janeiro became one of the most important centers of Catholicism in the Americas.  In the mid-19th century, a local priest came up with the idea that the city’s religious importance merited a major shrine, and suggested the idea of constructing a Christian monument on the top of Corcovado Mountain.  Such mountaintop constructions were an old tradition in the Americas, designed to distract local populations from indigenous religious practices.  Although the idea for such a monument was locally popular, it was rejected by the government owing to Brazil’s strict laws regulating the separation of church and state.

The effort was revived three decades later, with more success, under the auspices of a group of Catholic leaders.  This time there were no objections from the governmental authorities, and fundraising began in 1921.  Construction commenced a year later.  In the wake of the phenomenal success and popularity of a similar statue built a few years earlier on the Argentina-Chile border, it was decided that the monument would be in the form of a statue of Jesus Christ, the largest that had yet been raised anywhere on Earth.

Construction took a mere nine years, and was dedicated on October 12, 1931.  It was an overnight success, and immediately became one of the country’s most popular Christian pilgrimage sites along with the Basilica of Aparecida.  It has also been the defacto national symbol of Brazil ever since.  At the beginning of the 21st century, the statue of Christ the Redeemer became a condender as one of the New Seven Wonders of the World, and thanks to an immense local effort, it received a coveted place on that list.  This virtually guarantees the statue as one of the world’s must-see Christian sites for generations to come.

The Statue of Christ the Redeemer dominates the vista and skyline of Rio de Janeiro.  Standing at a hundred and twenty feet in height, its perch on the two-thousand three-hundred foot peak of Corcovado only adds to its imposing presence.  A design competition resulted in the choice of Jesus with his arms open wide as if to embrace the entire world.  The statue’s symbolic cross-like appearance is impossible to misinterpret.

The statue, designed by a Frenchman Paul Landowski, is made of steel-reinforced concrete and finished with limestone.  It stands upon a pedestal located at the very peak of the mountain.  In 2006, a chapel was added to the site to accommodate the pilgrims who desired to hold religious celebrations such as baptisms and weddings there.

While the Statue of Christ the Redeemer is very easy to see from throughout Rio De Janeiro, it is not easy to get to, especially on foot.  Fortunately, the city has an extensive tourism network that makes the statue more easily accessible.  The statue is technically an open site, but there is almost no way of getting to the top of the mountain without incurring some costs.  The most popular route is by the cogwheel train which runs daily from 8:30am-6:00pm.  As of this writing the cost of the train was not available.  Web: www.corcovado.com.br (official website)

Rio de Janeiro is a city of many churches.  Among the more interesting are the Old Cathedral, which served as the Chapel of the Portugese royal family in exile; and the ultra-modern New Cathedral, one of the world’s most unique examples of contemporary church architecture.  Contrary to popular belief, Christ the Redeemer is not actually the world’s largest statue of Jesus of Nazareth.  That honor goes to Cristo de la Concordia in Cochabamba, Bolivia.  It was also not the first major such statue in South America.  That was Christ the Redeemer of the Andes on the Argentina-Chile border.