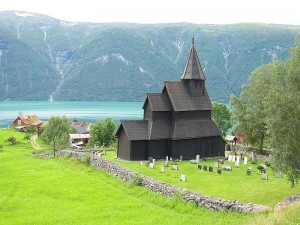 When Christianity arrived in Scandinavia, it found a land rich in lumber and people highly skilled in carpentry and woodworking.  When the first churches began springing up throughout the Scandinavian countryside, the people adopted the local styles and created one of the most unique forms of Christian architecture: the stave church.  Throughout the Middle Ages, stave churches were erected all over Norway and Sweden, becoming an important part of Scandinavian Christian culture.  A surprising number still survive to the present day, a testament to the skill of medieval Scandinavian woodworkers.  The most famous and beautiful of these is the Urnes Stave Church in Luster, and is one of the most popular tourist destinations in Norway.  The Urnes Stave Church is a UNESCO World Heritage Site.

No place in Europe held out against Christianity as long as the realms on the Scandinavian Peninsula.  While this was due in large part to geography, there were also important cultural elements to the resistance.  For example, by the time Christianity exploded out of the Roman Empire, the traditions and beliefs of neighboring Germans, Celts and Slavs had already become severely weakened.  Not so in Scandinavia, which had been all but cut off from Christianity until well into the Viking period; and then Christians were only seen as a source of worldly, and not spiritual, treasures which were brought back to Scandinavia as loot.

Nevertheless there were some inroads made, and by the mid-12th century there were sizeable Christian communities in the south of the peninsula and in the coastal towns.  However, the lack of roads and infrastructure made it difficult to spread the gospel into Scandinavia’s less accessible communities, which were numerous.  Even among those Scandinavians who did adapt Christianity, the control and influence of the Papacy in Rome was weaker here than in any other place in Europe.  Local customs and traditions continued to flourish well into the 14th century and beyond.

Another problem Scandinavian Christians faced was the lack of large churches to serve sizeable congregations.  This was due in part to the fact that churches had traditionally been constructed from stone, and Scandinavia lacked a significant force of skilled stoneworkers.  Instead they turned to the great forests that had long provided them with the lumber for their fleets of Viking warships.  By the end of the 12th century, Scandinavia had developed its own great architectural innovation: the stave church.

Stave churches appeared in the early- to mid-12th century in the area around Sogn Og Fjorden in southern Norway.  The oldest of these, and possibly the first ever constructed, was the Urnes Stave Church in Luster.  The Urnes Stave Church was the largest church yet built in Scandinavia, and was a prototype for future stave church construction.  So sound was the engineering of the building and quality of the materials that the church has survived to the present day essentially intact, with only a few minor additions and renovations. It is treasured today as Norway’s most revered Christian site, and receives hundreds of thousands of visitors every year.

The Urnes Stave Church is located on the outskirts of Luster amidst an inspirational setting of lakes, forests and snow-capped mountains.  The church itself is a classic example of early stave architecture, featuring steep-sloped roofs growing ever-narrower until culminating in the steeple.  Much of the Urnes Stave Church dates from its original construction in the 12th century, though some parts date from later renovations.

Although it lacks many of the embellishments, such as roof ornamentation, that would later be a hallmark of stave church construction, there are some beautiful exterior details, such as the exquisite scrollwork on and around the church doors.  The church interior is rich with excellent woodwork and hand-carved furniture, including precision-cut posts and beams as well as intricate wall carvings.

Though the Urnes Stave Church is close by the Sognefjord, it is nearly two-hundred and fifty miles northwest of Oslo and requires some effort to get to.  The church is open from June through August from 10:30am-5:30pm.  Admission is Kr45.00.  Web: www.stavechurch.com/en/urnes (official website)

The region of Sogn og Fjordan is home to numerous other stave churches, many of which date back to the 12th century.  These include the Borgund Church, the Hopperstad Church, the Kaupanger Church and the Undredal Church.  Other major clusters of stave churches can be found in the regions of Oppland, Buskerud and More og Romsdal.