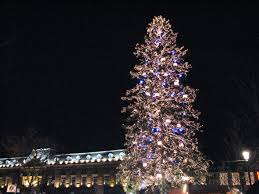 The city of Strasbourg in France is the self-described ‘Capital City of Christmas’, and there is certainly reason to believe this, at least within the borders of France.  Strasbourg, the largest city in the Franco-German frontier region of Alsace, boasts not one but two of France’s most time-honored holiday traditions.  First is the Strasbourg Christmas Market, the oldest and largest in France; and second is the beautiful Strasbourg Cathedral, which was home to the world’s first documented Christmas Tree.  Today Strasbourg enjoys the blended cultures of France and Germany, and at no time is this more evident than at Christmas, when city parades the holiday best of both countries.

The Strasbourg Christmas Market dates back to 1570 and is the oldest in France.  Of course, the festival was founded while Strasbourg was part of the German-speaking Holy Roman Empire, and the idea of the market was undoubtedly borrowed from other nearby Christmas markets in Germany.  Nevertheless, when France annexed Strasbourg in 1681, the French vigorously embraced the annual festival.  The Christmas Market would continue on steadily through many centuries of Franco-German squabbles and wars to control the region.  The modern festival now represents a cultural reconciliation of the two European powers, drawing millions of pilgrims and shoppers from both countries every year. 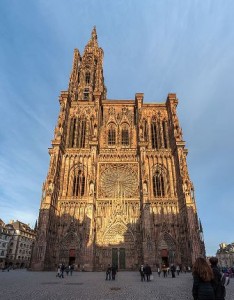 Strasbourg Cathedral is one of the most magnificent cathedrals along the Rhine River.  A late Gothic masterpiece, the cathedral briefly held the title of the tallest man-made structure in the world, and is still among the tallest cathedrals.  It is famous for its astronomical clock.  The cathedral’s brush with Christmas fame is due to a record in the church archives with makes reference to a Christmas Tree set-up in the cathedral in the year 1539.  Although festivally decorated trees undoubtedly date back to ancient German pagan Yuletide celebrations, the Strasbourg Cathedral Christmas Tree of 1539 is the oldest known recorded such decoration in a Christian house of worship.  Every year, the city of Strasbourg erects an enormous Christmas Tree which is traditionally among the largest such trees in France.

Strasbourg Cathedral dominates the skyline of the heart of the city.  The Strasbourg Christmas Market spraws over several of the city’s major plazas, including the area near the cathedral.  It takes place every year over the thirty-day period leading up to Christmas Eve.  The cathedral is open daily from 7:00am-7:00pm (closed for lunch 11:20am-12:35pm).  Hours for the Christmas Market varies.  There is no charge for admission to either.  Web: www.cathedrale-strasbourg.fr, www.noel.strasbourg.eu (official websites)