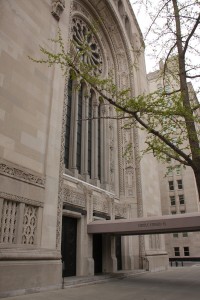 While congregations of Sephardic Jews had been around New York since the 17th century, it was the arrival of huge numbers of Ashkenazi Jews from Central and Eastern Europe that would ultimately come to define Jewish life and culture in America.  At the turn of the last century, New York was the premier destination for Jewish immigrants arriving from Eastern Europe.  By the beginning of World War II, New York had the largest Jewish population of any city in the world.  Even today there are more Jews living in the New York City metro area than in any other place outside of Israel.  It is therefore not surprising that New York is home to America’s largest synagogue: Temple Emanuel.  For the better part of the last century, until just a few years ago in fact, Temple Emanuel also had the distinction of being the largest synagogue in the world.

Most of the early Jewish arrivals in New York City were Sephardic immigrants coming from Brazil and other Portuguese and Spanish colonies in the New World.  In fact, very few American Jews were of Central or Eastern European origin prior to the 19th century.  This situation began to change drastically in the 1830s, when large waves of Ashkenazi Jewish immigrants began arriving from origination points further east.  By that time, New York City was the largest and busiest port in the United States and the primary destination for immigrants arriving from Europe. 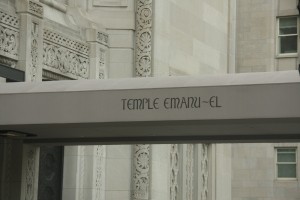 The first European Jews to arrive in New York City were Ashkenazi Jews from Germany.  Their arrival not only swelled the numbers of the existing Jewish population, it also quickly overwhelmed the earlier Sephardic culture.  The Ashkenazis introduced a strong secular element to Jewish life in America, with a focus on intellectual professions and the arts, and perhaps most importantly, the use of Yiddish, a Hebrew-German hybrid language.  In 1845 the German Jews established the Congregation Emanu-El, the first Reform Jewish congregation in America.

Like Shearith Israel, Congregation Emanu-El moved several times.  Beginning in the Lower East Side, which was home to many European Jewish immigrants in the 19th century, the congregation built a succession of synagogues up Fifth Avenue, each on larger and more beautiful than the last.  In 1927 Emanu-El merged with another New York congregation, Beth-El.  In 1929, the consolidated  congregation moved into its current home at the Temple Emanu-El Synagogue on the Upper East Side of Manhatten. 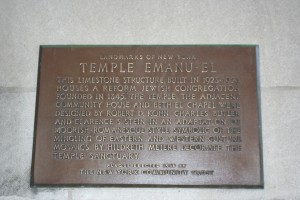 As the 20th century dawned, Emanu-El was, along with Shearith Israel, the most prominent Jewish congregation in New York.  From its inception, Emanu-El espoused Reform Judaism, and has been a cornerstone of the American Reform Jewish community ever since.  Despite this, the shear size and magnificence of Temple Emanu-El has made it a pilgrimage destination for Jews from all over the religious spectrum.  If Judaism has an answer to the great Christian cathedrals of the world, this is undoubtedly it.

The Temple Emanu-El Synagogue is not only one of the most important synagogues in the United States, it is also one of the largest in the world (the largest or second largest depending on who you ask).  Located almost directly across Central Park from the Spanish and Portuguese Synagogue, its neo-Romanesque façade seems almost like a direct challenge to its neo-Classical neighbor on the Upper West Side.

This massive edifice is famous for its giant vaulted sanctuary and beautiful stained-glass windows.  The Temple can seat upwards of twenty-five hundred people (more than nearby St. Patrick’s Cathedral), with gallery seating for five hundred.   Adjacent to the main sanctuary is the smaller Beth-El Chapel, which is used for special events.  The Temple Emanu-El Synagogue also houses a small Jewish Museum.

Temple Emanu-El is located on Fifth Avenue in Manhattan, a short walk from other architectural landmarks of the Upper East Side.  It has currently undergoing a massive restoration.  Opening hours for the synagogue vary, though services are held most days (see official website for schedule).  There is no cost for admission.  Web: http://www.emanuelnyc.org/ (official website)

The Upper East Side of Manhattan is rich in sites of Jewish interest.  Just a few blocks north along Fifth Avenue is the Jewish Museum of New York.  Not too far from this is Mount Sinai Hospital, one of the greatest Jewish medical institutions in the world and one of the most famous hospitals in the United States.