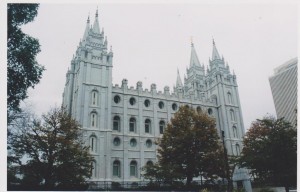 The Mormon Temple of Salt Lake City is the world headquarters of the Church of Latter Day Saints, America’s largest home-grown religious denomination.  It also the second largest active Christian headquarter complex in the United States.  The Temple itself is the centerpiece of the complex, which consists of dozens of other buildings, including the Mormon Tabernacle, home to the world famous Mormon Tabernacle Choir.  Much of the complex dates back to the 19th century, making it one of the most recently constructed Christian shrines.  The Temple is a must see for Mormons, most of whom make at least one pilgrimage to Salt Lake City during their lifetimes.  It is probably the most popular Christian site in the world that is not part of the Orthodox, Catholic or mainstream Protestant traditions.

The history of Salt Lake City and the Mormon Temple began almost three thousand miles away in Palmyra, New York, where a young Joseph Smith received a series of divine visions in the early 19th century.  These visions culminated in the discovery of a series of golden tablets, the translation of which led to the writing of the Book of Mormon, a supplement to the Testaments of the Bible.  This controversial book, denounced by every other Christian sect, became an integral part of the soon to be born Church of Latter Day Saints. 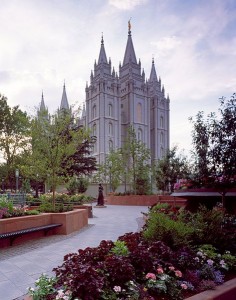 Joseph Smith relocated to Kirtland, Ohio in the 1830’s, where he founded his new church.  His small following grew quickly, and the first Mormon Church was built here.  However, local persecutions forced his congregation to relocate several times, first to Missouri, and later to Nauvoo in Illinois.  Each time the congregants grew in number, but problems continued to follow them.  Eventually, Joseph Smith was hunted down, imprisoned and killed by an angry mob.  The members of the Church of Latter Day Saints took this as a sign, and decided to pull up stakes and relocate to a completely new territory far away.

Three years later, under the direction of Brigham Young, thousands of Mormon settlers headed west past the Great Plains and Rocky Mountains, finally settling beside the Great Salt Lake.  There, all but isolated from outside contact, the Church of Latter Day Saints established a permanent utopian community.  A few years later, in 1853, Brigham Young laid the cornerstone for the Mormon Temple.  It took forty years to build, and by the time that it was completed, Salt Lake City was a thriving community.  At the time of its completion, the Temple was one of the largest buildings in the American west as well as one of the largest religious buildings in the country. 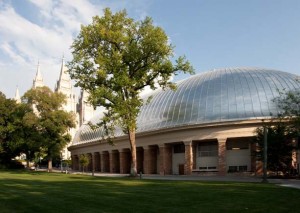 As the number of followers of the Church of Latter Saints grew into the millions over the next century, Salt Lake City grew in importance as the church world headquarters.  Temple Square became a sprawling complex, with a Tabernacle, assembly halls, annexes, and a number of memorial sites.  It was hoped at one time that the body of Joseph Smith would one day rest within the square, but the few people who knew for certain where it was kept their secret unto death.  The final resting place of Joseph Smith remains unknown.  The Mormon community is more welcoming today than it once was, so most of the Temple precincts are open to the general public.  Only the Mormon Temple itself is off-limits to non-Mormons.  Nevertheless countless Mormons visit annually, and thousands of other tourists come to visit the complex’s permitted sites.

The Mormon Temple is an inspiring structure towering more than two hundred feet over the surrounding square.  Constructed of granite quarried from a nearby canyon, the Temple is one of the most unique in Christian architecture, sporting a contemporary 20th century look despite its 19th century origin.  The tallest point is capped with a golden statue of the angel Moroni.  An oval reflecting pool and surrounding flower gardens complete the Temple’s setting.  An interior description of the Temple is not available as it is off-limits to non-Mormons. 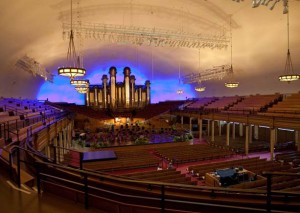 The Mormon Tabernacle is the other major building of Temple Square.  The great domed hall was built shortly after the main Temple was completed, and was similarly ahead of its time architecturally.  Originally conceived as a large public meeting hall, the Tabernacle has since become world famous for its musical programs in the form of the Mormon Tabernacle Choir, one of the greatest religious choruses in the United States.  Among the buildings more prominent features is the Tabernacle Organ, adorned with nearly twelve thousand pipes.

The Temple enclave dominates the heart of Salt Lake City, and is the unrivaled religious center of both the city as well as the State of Utah.  The enclave’s plazas and buildings are almost all open to the public, though hours vary.  There is no cost of admission to enter the enclave when it is open.  Visitor information for the Temple itself was not available as of this writing, though it is off-limits to non-Mormons.  Web: http://www.ldschurchtemples.com/saltlake/ (official website) 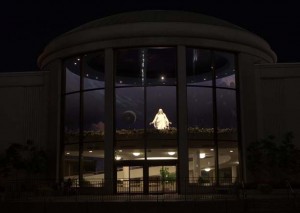