Since the earliest days of the church, artists and sculptors have been creating paintings, frescoes, mosaics, statues and sculptures of the Virgin Mary in all her various forms. Sometimes she appears in a small niche as the Madonna and Child; sometimes she is painted on an altarpiece or shown in a stained glass window as Mary, Queen of the Universe. Cathedrals, basilicas and churches the world over house art depicting the Immaculate Conception, the Nativity, the Virgin’s Assumption and other themes that feature Mary as a main figure. 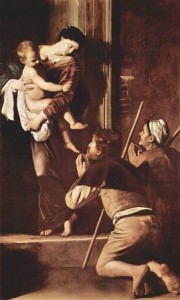 The Basilica of Saint Augustine is one of the oldest Renaissance churches in Rome. Constructed in 1483, the plain façade, made from travertine taken from the Colosseum, is reflective of simple early Renaissance styles. Though the exterior is rather plain and unassuming, the church itself is home to several important tombs and works of art. Saint Monica, mother of Saint Augustine, and Olav Trondsson, the archbishop of Norway from 1459 to 1473 are laid to rest inside; adorning the walls are a fresco by Raphael and Saints Augustine, John the Evangelist and Jerome by Guercino, and several statues by minor sculptures grace the interior. The Buongiovanni Chapel boasts three paintings and a ceiling fresco of the Assumption by Giovanni Lanfranco.

The most famous work of art that resides in the basilica is the painting Madonna of Loreto by celebrated Baroque artist Michelangelo Caravaggio. The painting, originally commissioned as part of a private collection in 1604, depicts the appearance of a Mary and baby Jesus to two peasants on a pilgrimage. In its day, the painting was a source of controversy; many religious painters and church officials disliked it because it featured the Virgin and Child, as well as their surroundings, in a decidedly ordinary way. Mary is barefoot, and her baby is naked; the only part of their appearance which suggests any divinity is the slimmest of halos atop Mary’s head. They are not surrounded by chorusing angels or a golden light, but stand in a plain brick doorway. The common people loved it, however, and it became an icon of Catholic artwork. 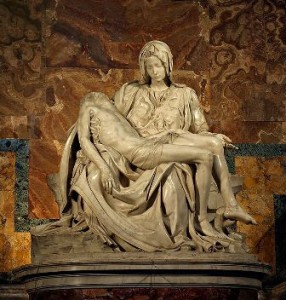 Saint Peter’s Basilica, consecrated in 1626 and designed by masters like Michelangelo and Bernini, is universally synonymous with papal splendor and power; it is the Catholic Church at its most majestic. As such, every inch of the basilica is a work of art; ornate carvings everywhere, breathtaking architecture, a magnificent altar, and of course the most famous of all, the ceiling of the Sistine Chapel. The influences of the Baroque period and the Catholic Counter-Reformation on art and architecture are arguably most evident in this building.

Amongst splendid decoration, priceless paintings and intricate sculptures, Michelangelo’s sculpture Pietà stands out as perhaps the most poignant and beautiful singular work of art in the basilica. The sculpture itself is simple, just the Virgin Mary cradling the body of a crucified Christ. It is the captivatingly graceful and sorrowful face of Mary herself which made this sculpture a celebrated work even in its own day.

Church of Our Lady in Bruges, Bruges, Belgium 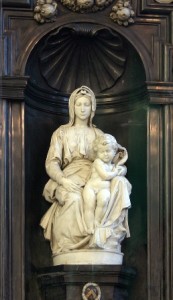 Dating back to the 13th century, the Church of Our Lady in Bruges boasts a breathtaking mix of Gothic and Flemish architecture; its brickwork tower, constructed in the 14th century, remains the second-tallest in the world. The church is also the final resting place of Charles the Bold, the last Valois duke of Burgundy, and his daughter, the duchess Mary. It is also home to many precious works of the Northern Renaissance, including Crucifixion of Christ by Anthony van Dyck, and an elaborate Rococo pulpit.

Madonna and Child is inarguably the most famous work the church houses; it is the only piece of Michelangelo’s work to be removed from Italy during his lifetime, and remains one of few works permanently housed outside of Italy today. Aside from a graceful, quiet beauty, the Bruges Madonna also has a rather exciting history. Created by Michelangelo in 1504 and originally intended to go to a cathedral in Siena, Italy, it was purchased en route by two Brugean merchants, the Mouscron brothers. They donated the sculpture to the Church of Our Lady in Bruges in 1514; since then, it has been taken twice from its home and subsequently recovered. The first time, the Madonna was taken by invading French revolutionaries in 1794; the second time, it was stolen by occupying Nazis in 1944 and recovered by the group known as the MFAA, also known as the Monuments Men. 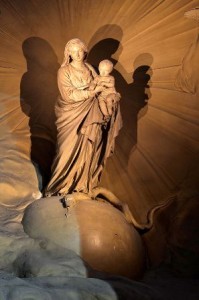 The present-day Church of Saint-Sulpice is the second to occupy the sanctified ground; it was erected over a 13th century Romanesque church. Construction began in 1646 when Anne of Austria, mother of Louis XIV, laid the cornerstone, though it was interrupted twice by political turmoil and a lack of funding. The first part to be completed was the Lady Chapel, which features an exquisitely painted dome. This chapel, the western façade, sanctuary, ambulatory, transept and portals were all designed by different architects at different times, resulting in a stunning mix of Baroque and Rococo styles in architecture and decoration. The church showcases nearly every kind of decoration imaginable, from Corinthian columns to holy water fonts made from giant shells.

The first statue in the Lady Chapel was a solid silver statue of the Virgin Mary; it was known as “Our Lady of the Old Tableware” because it had been cast from the donated silverware of parishioners. The old statue vanished during the French Revolution, and was replaced by Pigalle’s white marble Madonna and Child, which remains a beloved icon of the Parisian Christian tradition.

Assumption into Heaven of the Blessed Virgin Mary – Unknown Artist

Cathedral of Our Lady of Chartres, Chartres, France 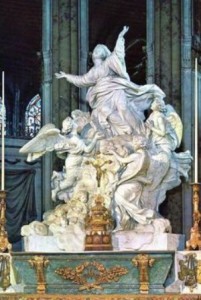 Chartres Cathedral, a UNESCO World Heritage Site considered to be the finest example of French Gothic architecture, has changed little since its construction in the 13th century. It is the fifth cathedral to occupy the spot since the town of Chartres became a bishopric in the 4th century, and is exceptionally well-preserved. Nearly all of the original stained-glass windows remain intact, and there has been very little architectural changes to it since the early 13th century. It attracts large numbers of visitors; pilgrims come to see the Sancta Camisa, supposedly the tunic worn by the Virgin Mary when she gave birth to Jesus Christ, while secular tourists come to admire the structure’s historical and architectural importance.

In a cathedral dedicated to Mary, it is no wonder that the sculpture of her is one of the most magnificent anywhere. The sculpture Assumption into Heaven of the Blessed Virgin Mary, created by an unknown artist, depicts Mary, arms outstretched, being lifted up to heaven by a group of adoring angels. Though very little is known about the sculpture, the Baroque masterpiece is undoubtedly one of the most beautiful pieces of statuary ever created for a church.