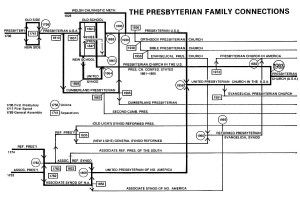 One of the oldest and greatest traditions of Christianity is the “schism” the periodic act of the church splitting due to differences in doctrine, leadership, and occasionally geography. From the very first Pauline-Gnosticism split in the 1st century to the breakup of the Presbyterian Church USA in the 21st century, Christianity has split so many times and on such a regular basis that there are (very conservatively) no fewer than five hundred denominations, not including completely independent single-congregation churches.

In the beginning, there was just “The” Church. According to Biblical accounts, the Church was officially founded on Pentacost, which is celebrated seven Sundays (50 days inclusive) after Easter Sunday, sometime around 32 AD. At the moment of its birth, the New Testament indicates that there were 120 members, including the Apostles.

The period of one and only one Church did not last long. The Book of Acts and several of the letters of Paul indicate that by 50 AD there were at the very least several factions within “the” Church, and possibly multiple sects under different leaders. Whether or not these would constitute true schisms is open to interpretation.

It is impossible to know now how many different sects of Christianity existed at the time of the First Council of Nicaea. And since the Church did not have a single defining statement of faith before this time, these sects cannot truly be seen as schismatic in nature. However, the creation of the Nicene Creed at the council immediately led to the first true major schism. Those who adhered to the Creed became Catholic-Orthodox Christians (the new “true” Church) and those who didn’t, primarily the Arians, who have largely faded from history. This schism was solidified at the First Council of Constantinople in 381 AD.

Council of Ephesus and the Second Major Schism (431 D)

In the 5th century, there was a division in the Church over those who wanted to refer to Mary as the “Birth Giver of God” and the “Birth Giver of Christ”. Seriously. This rift was big enough to constitute the calling of an ecumenical council, which officially settled on the former title. Those who did not accept this decision, led by the Patriarch Nestorius of Constantinople, split off from the main church and formed the Church of the East, informally called the Nestorians. The Church of the East survives to the present day in parts of Iran and Iraq.

Council of Chalcedon and the Third Major Schism (451 AD)

A few years after the Council of Ephesus, another council was convened to address, among other things, Monophysitism, the idea that Jesus had a single nature rather than two (human and divine). Patriarch Dioscorus I of Alexandria defended this theory, and was replaced. However, his supporters in Egypt and elsewhere supported him, and broke away en masse to form the Oriental Orthodox (Coptic) Church. The Oriental Orthodox Church is still active in many countries, notably Egypt and Armenia.

By the 6th century, Christianity was nominally led by five great patriarchs, in Rome, Constantinople, Antioch, Alexandria and Jerusalem. However, by the Middle Ages, the latter three cities were in the hands of the Islamic Caliphate, and in any event those patriarchal seats were disputed by the Nestorian and Coptic Christians. That left the Patriarch of Rome in charge in the Latin west and the Patriarch of Constantinople in the Greek east. For centuries these two position were rivals with each other, with doctrinal disputes such as whether or not unleavened bread should be used for communion (again, seriously). The real dispute of course was over who was the supreme leader of the Church, the Pope or the Patriarch in Constantinople, and in 1054 they simply divorced in the largest Christian schism in history.

During the later years of the Middle Ages, the Roman Catholic Church, the only legal Christian church in Western Europe, was beginning to have serious difficulties. The failure of the Crusades, the destruction of the Black Plague, and increasing corruption among the clergy led to a great loss of respect for the Church in Europe. Heretical movements were beginning to appear everywhere. The building of the new St. Peter’s Basilica in Rome led to wild financing schemes, including the selling of indulgences. Finally, in 1517, a monk named Martin Luther formally and successfully challenged Church authority, kicking off the Protestant Reformation. Huge numbers of Christians in Northern Europe began abandoning Catholicism.

Just as the Protestant Reformation was sweeping across Central and Northern Europe, there was an interesting and unexpected development in England. King Henry VIII, chafing at the authority of the Pope who not allow him to get a divorce, used the Reformation as cover to break away from the Roman Catholic Church as well. But in this case, the reason was not about doctrine (except on the surface), but like the Great Schism it was really about supreme religious authority. Henry repudiated the Papacy, established the Church of England and placed himself at its head.

Result: Presbyterian predecessors stay with Catholic Church, but the stage is set for a formal break in Scotland

Almost immediately following Martin Luther’s rebellion in Germany, Ulrich Zwingli began a similar movement in Switzerland. For a while the two movements sought a common platform, but doctrinal differences led to a split between the two in 1542. Around this time the basic tenets of the Reform version of Protestantism (as opposed to Lutheranism) were being espoused and canonized by John Calvin, also in Switzerland. By the time of his death in 1564, Reform churches were established in a number of countries in Western Europe.

John Knox, a Scottish clergyman, was the first prominent person in Scotland to embrace the Reformation. Scotland, still a Catholic nation, exiled him for his efforts, and he fled to England where he served for a few years with the Church of England. He then went to Geneva in Switzerland where he studied under John Calvin and ultimately embraced the teachings of the Reform Church. The Reform Church was then spreading through Western Europe, with organizations in Switzerland, France (the Huguenots), Holland (the Dutch Reformists) and England (the Puritans, who worked within the framework of the Church of England). Knox eventually returned to his home country and set about establishing the Church of Scotland.

Result: Presbyterian predecessors officially break with the Catholic Church and embrace the teachings of Calvin and Knox; many Scottish members of the Church of England also join the Church of Scotland

In the 17th century, a new movement appeared among the various Reform groups in the British Isles. This movement, known as Presbyterianism, espoused the supreme authority of the Bible, and members generally preferred not to be associated with the national churches, which had supreme authority vested in people. This move emerged primarily in Scotland, and in 1690 the Reformed Presbyterian Church of Scotland, the world’s first Presbyterian Church, was formed.

As the British stepped up their colonization of the New World in the 18th century, many Scottish and Irish Protestants began arriving in America. Most of these early waves practiced Presbyterianism, which was then still being persecuted in the British Isles. The Scots-Irish settlers founded the first independent Presbytery in America in Phildalphia in 1706.

Result: Presbyterians establish a new and independent church in America

By the end of the American Revolution, several other Presbyterian groups migrated to America and formed their own churches. From the 1780s to the 1950s these various churches split, combine and split again over and over. By 1956 there are at least twelve active Presbyterian denominations, with the three largest being Presbyterian USA, the Presbyterian Church in the U.S. and the United Presbyterian Church of North America.

Result: PCUSA predecessors mostly members of Presbyterian Church in the US

Following a series of progressive moves by the PCUSA national assembly over the last few decades, several more traditional congregations break off and form the Covenant Order of Evangelical Presbyterians (aka ECO).

Result: First Presbyterian Church of Marietta makes the decision to stay with PCUSA