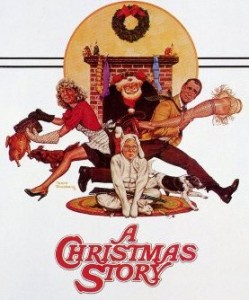 Since the dawn of the Hollywood era, movies have been an integral part of the Christmas season.  Even the most jaded would be hard-pressed not to be able to name at least one holiday classic that they hold near and dear.  From the first production of “A Christmas Carol” in the early silent era to the annual onslaught of holiday dramas on the Lifetime and Hallmark channels, there have been literally hundreds upon hundreds of Christmas movies made for the big screen and television (and that’s not counting the avalanche of Christmas specials that have inundated television and direct-to-video since the 1960s).

But for all of these films, there are fewer than twenty that have truly achieved holiday season immortality.  And in recent years, even some of the older ones of these have begun to fade into semi-obscurity.  Sadly, the greatest days of Christmas in film are probably behind us.  But be of good cheer!  About once every decade, a true diamond in the rough appears in November or December, reminding the Hollywood holiday faithful that even in these cynical days there is hope for a new Christmas classic to be born.

So first, let’s take a look at the seven reigning champions of the holiday season, in order of release (theatrically released films only):

If ever a movie deserved the title “heartwarming”, this would be it.  Director Frank Capra’s 1946 masterpiece, It’s a Wonderful Life is arguably the most touching holiday film of all time.  Starring blockbuster trio James Stewart, Lionel Barrymore and Donna Reed, this film was, surprisingly, a box office flop at the time of its release.  However, there is no denying its staying power and recognition, with five Academy Award nominations and appearance in six separate AFI lists (including number one in the 100 Years, 100 Cheers category).  Due to its soaring popularity, the movie nearly succumbed to death by overexposure in the 1990s, when it appeared on television multiple times daily between Thanksgiving and Christmas.  Fortunately, it is now restricted to only a few showings, including one usually on Christmas Eve.  Overdone Children’s Quote: “Everytime a bell rings, an angel gets it’s wings!”

Santa Claus is, not surprisingly, a common character in Christmas movies.  However, with apologies to Tim Allen, this is the definitive Santa Claus film.  Released in early 1947, right on the heels of It’s a Wonderful Life, this film featured Maureen O’Hara, a very young Natalie Wood, and a magnificent, Academy award winning Edmund Gwenn as the most convincing Kris Kringle of all time.  Set in Macy’s Department Store in New York City, Miracle offers a very interesting glimpse, as well as some excellent archival footage, of Christmas in New York in the post-war years.  Because of its close ties to the Macy’s Thanksgiving Day parade, this film usually kicks off the holiday television season by running over Thanksgiving weekend.  Overdone Children’s Quote: “I believe, I believe, its silly but I believe!”

Following thirteen years after the Reginald Owen edition, Scrooge (released as A Christmas Carol in the United States), this Alastair Sim version is almost universally acclaimed as the best film version ever made.  Although released in 1951, it feels like a much older film, as though it were actually made in the early 19th century.  Everything in Scrooge, from the haunting motif of the song Barbara Allen which pervades the most poignant scenes to the excellent interpretation of the original story to Sim’s absolutely breathtaking performance, this may be the greatest holiday movie of all time.  Even Tiny Tim’s rendition of God bless us, everyone, comes across as genuine and heartfelt (a rarity for this most parodied of Christmas lines).  Overdone Children’s Quote: Do I really have to say it again?

Irving Berlin’s “White Christmas” is far and away the most successful holiday song of all time.  So it is not surprising that it led to not one, but two, classic holiday films.  The second, and the better known, of the two was the movie White Christmas.  Coming twelve years after Holiday Inn (which some fans consider to be the better of the two movies), it was the last major Christmas movie of the golden age of Hollywood.  Starring Bing Crosby, Danny Kaye and Rosemary Cluny, White Christmas is the definitive holiday musical, with an entire lineup of Irving Berlin tunes.  Designed to honor soldiers who had served in World War II and Korea, as well as an America at its post-war height, White Christmas is short on plot but long on sentiment.  Overdone Children’s Quote: Not really applicable on this one.

After a nearly thirty-year gap in which no holiday movie of consequence was released, the hilariously funny A Christmas Story hit the holiday scene.  Like It’s a Wonderful Life, A Christmas Story was a flop when it was released in 1983.  But it has since emerged as the definitive Christmas cult classic, usually dominating many household televisions during marathon showings on Christmas day.  Featuring outstanding performances by Peter Billingsley and Darren McGavin and perfect narration by author Jean Shepherd, A Christmas Story practically created the holiday comedy genre.  While perhaps not the best Christmas movie ever made, it has been (at least for the last two decades) by far the most popular.  Overdone Children’s Quote (sort of): “You’ll shoot your eye out!”

I have no doubt that I am stirring up a hornet’s nest with this one, but yes, Home Alone deserves to be on this list.  Released before Thanksgiving in 1990, it was still running strong in May 1991, including twelve weeks in the number one spot (an extreme rarity in recent Hollywood history; no other movie since has performed as well), and nearly $478 million in worldwide box office receipts.  A great cast, featuring Joe Pesci, Daniel Stern and a then-adorable Macaulay Culkin, definitely had a lot to do with this film overcoming its slapstick handicap.  Also worthwhile is one of the most charming scores ever written by the incomparable John Williams, including what is arguably the most moving rendition of O Holy Night ever performed.  Overdone Children’s Quote: “Aaaaaaaaaaagh!”

Over the course of the last 25 years, only one Christmas movie has truly made it into the top ranks among the most popular holiday films of all time, and that is the hilarious and charming Elf.  A huge hit at the time of its release, managed to poke gentle fun at the Rankin Bass Christmas television specials of the 1960s while evoking the charm and magic of the original Miracle on 34th Street.  A fantastic cast led by Will Ferrell as the title Elf character Buddy, the movie is a virtual tour of New York City at Christmas (proving once again that few places rival New York at the holidays).  Don’t miss Ed Asner as a crotchety Santa, James Caan as a crotchety businessman, and Zooey Deschanel as a crotchety department store employee all recapture long lost Christmas magic.  Overdone Children’s Quote: “(loud belch).  Did you HEAR that?”

Before the modern holiday movie era began in the 1980s, a few other movies were must-sees every December.  While time has unfortunately tarnished their popularity, they are still worth an evening with a mug of eggnog:

A Christmas Carol (1938) – Reginald Owen stars as Scrooge in this MGM adaptation which was the most popular version until it was dethroned by Alistair Sim in 1951.

Holiday Inn (1942) – Bing Crosby and Fred Astair team up in this musical masterpiece featuring the songs of Irving Berlin.

The Bishop’s Wife (1947) – Carey Grant’s angel and David Niven’s bishop remind us that there is a religious side to Christmas.

Some Recent Entries That Are Close

Here are some newer holiday films which are popular but which don’t quite make it to the top:

The Santa Clause (1994) – This yarn featuring Tim Allen as the big man has become a holiday staple, but time will yet tell if it will become a classic for the ages.

The Polar Express (2004) – A disappointment at the time of its release, the criticized CGI masks a charming story and amazing score that is becoming a cult classic.

The Nativity Story (2006) – Although not well received when it came out, this is the only feature-length film which actually tells the story of the Christmas Nativity; for that reason alone it deserves a mention.

Disney’s A Christmas Carol (2009) – The best animated version of this story ever made, it is extremely true to the original book, but the weird animation can put viewers off.

What Were They Thinking

Santa Claus Conquers the Martians (1964) – Yes, you read that right.  Sadly, this may have been the holiday movie highlight of the 1960s.

Santa Claus: The Movie (1985) – Dudley Moore’s entry in the Christmas genre one of the worst-rated holiday movies of all time.

So now its been twelve years since Elf, the last truly popular Christmas film, has been unleashed on the holiday season, and we are really overdue for a big hit.  So what are the odds for 2015?  The big holiday films set for this year are The Night Before (a raunchy comedy), and Krampus (a horror film).

Not holding my breath.