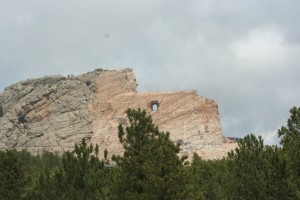 The Black Hills of South Dakota are possibly the most famous of all sacred Native places in the United States, and one of the last to remain in the hands of Native American tribes.  While the hills are collectively sacred, there are some parts of particular importance.  The best known of these is Thunderhead Mountain.  More commonly referred to as the Crazy Horse Memorial, this sacred mountain is part of a large educational and religious complex dedicated to the regional Native American culture.  The centerpiece is the Crazy Horse Memorial itself, an immense carving of one of the greatest Native leaders of all time. It is still in the construction process.

The Black Hills have been inhabited by migrating peoples perhaps as far back as 7000 BC.  The more modern Native Trives began to establish themselves in the area around 1500 AD, about the same time Europeans were beginning to explore the North American continent.  Among these were the Cheyenne, Pawnee and Crow.  These were later displaced in the 18th century by the Lakota people who in turn were being encroached upon by white settlers. 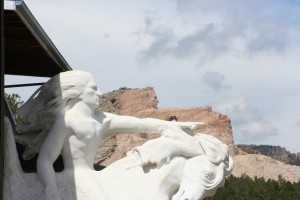 Up through the end of the American Civil War, the Black Hills were largely left alone by the United States.  Only a few early explorers and settlers passed through.  By the late 1860s the Lakota were firmly entrenched in the area, which was held by them and other nearby tribes to be the heart of the world. This idyllic era ended a decade later in the Black Hills War.

During the 1870s gold was discovered in the area, and the Lakota’s days were numbered.  Allied with the Cheyenne and Arapahoe tribes, the Lakota put up a valiant fight, including a tremendous victory at the Battle of Little Bighorn under their leader Crazy Horse.  But in the end the war was lost, and the Lakota and other tribes were driven out of the Black Hills.  Nevertheless they clung to their love and reverence for the area.

In 1929 a Lakota leader, Henry Standing Bear, began organizing an effort to create a great memorial in the Black Hills, largely in answer to the construction of nearby Mount Rushmore, which was seen as an affront to the Lakota.  After securing a site on and around Thunderhead Mountain, carving of the mountain began in 1948.  This carving, still ongoing, has become one of the most important symbols of Native American culture in the United States, and one of the most popular sacred destinations in the Dakotas.

Thunderhead Mountain is the best known landmark of the sacred Black Hills, though it is arguably more important culturally than religiously.  Since the middle of the 20th century, the massive granite peak has been carved one chisel at a time, slowly taking on the form of the Native American hero Crazy Horse.  When it is completed it will be the largest sculpture or statue of any kind on the planet. All  money for the project comes from private donations. 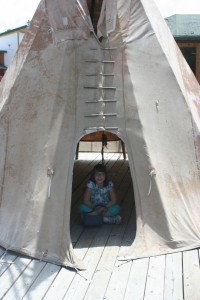 The memorial itself includes a large complex with a museum and cultural center.  There are extensive exhibits on the history of the Black Hills and Native American culture in general.  Religious and cultural ceremonies are held in and around the area of the Crazy Horse Memorial.  What really makes the surrounding area sacred are the ancient burial sites of the Lakota and other peoples who once lived in the Black Hills.

The Crazy Horse Memorial is located in the heart of the Black Hills.  The closest town, Hill City, is eight miles to the north, while the closest major city, Rapid City, is nearly thirty miles away.  The Memorial is open year round from 8:00am-5:00pm.  The cost of admission is $11.00 per person or $28.00 per carload. Admission includes access to the memorial, all museums and exhibits as well as a nightly laser show.  Web: http://crazyhorsememorial.org (official website). 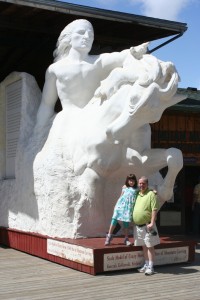 Technically speaking, most of the Black Hills are collectively sacred, but some spots are more important to others.  Aside from Thunderhead Mountain, probably the most sacred place is Inyan Kara Mountain which was traditionally associated with child bearing.