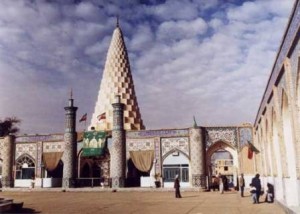 Of all of the great figures of the Bible, no one has as many burial sites attributed to them as the Prophet Daniel.  More than half a dozen cities in Iran, Iraq and even Uzbekistan make the claim.  But the majority of Jews and Muslims believe the Tomb of Daniel in Shush, Iran to be the correct one.  Shush, formerly known as Susa, was one of the numerous cities that served as capital of Persia in ancient times.  It was also one of the major homelands of the Jews in exile during the Babylonian Captivity.  The current site of the Tomb of Daniel is highly revered by both Arabs and Jews.  For the latter, it is one of the two holiest sites in Iran, along with the Tomb of Esther in Hamadan, though few now visit either.

The Assyrian Empire reached its height in the 7th century BC when it reigned over the entire Middle East, with the exception of one tiny region: the Kingdom of Judah.  Judah’s survival, however, rested on two things: the strength of the walls of Jerusalem; and the tribute levied to the Assyrians by Judah’s kings.  These measures kept the Kingdom of Judah safe for another century and a half.  But in the 6th century BC the Assyrians themselves succumbed to new conquerors, and Jerusalem’s time was up.  The Babylonians swept down from the north just as the Assyrians had, assailed the Holy City, and destroyed the magnificent Temple of Solomon.  The people of Judah, like the people of Israel before them, were taken away into captivity in the east.

Among the very first to go were the sons and daughters of Judah’s aristocrats, primarily to act as hostages for the fallen kingdom’s good behavior.  But unlike the Assyrians, the Babylonians seemed more interested in assimilating the conquered people.  They took the best and brightest back to Babylon, where they were trained to serve in the Babylonian government.  Some even served in the royal court.  The most famous of these was the prophet Daniel, who arrived at the Babylonian court along with a number of other prominent hostages including Shadrach, Meshack and Abednego.

Daniel’s subsequent career was remarkably similar to that of Joseph’s who had been sold into slavery in Egypt during the days of the patriarchs.  At first a prisoner, he became a prominent servant in the royal court.  His ability to interpret dreams and make reliable prophecies won the king’s notice.  He received successive appointments, first as governor of the city of Babylon, then as a senior governor of the empire.  His political career extended into the period of the Persian conquest of Babylon.  After impressing the Persian authorities with his skills, he ultimately attained the rank of Third Ruler of the realm, sort of a junior vice president.

Daniel’s service to the Babylonian and Persian rulers was  instrumental in keeping the Jews intact as a people.  Undoubtedly he used his influence to minimize their hardships, though he also was of genuine use to the foreign sovereigns he served.  His efforts also helped to lay the groundwork of friendly relations between the Jews and the Persians that lasted well into the 19th century.  Amazingly, his political achievements were dwarfed by his abilities as a prophet, at least from a Biblical perspective.  Daniel spent the last years of his life in the city of Susa, where he died and was buried around the time that the Babylonian Captivity came to an end.

The exact location of Daniel’s burial site is somewhat ambiguous.  As of the middle of the 7th century AD, it stood along the banks of the Choaspes River in what is now Iran.  However, rivalries between settlements on different sides of the river led to the body being relocated numerous times.  According to some sources, it was transferred between burial sites almost on an annual basis.  In the 11th century, King Sanjar apparently decided to settle the matter by burying the body within the river itself.  He also erected a shrine for pilgrims to visit, and some say that the body is not in the river, but in a tomb beneath the shrine.

Either way, it is the Shrine of Daniel that is venerated by pilgrims today.  The shrine building is a large structure with early Persian and Islamic influences.  The walls and entrances are reflective of the styles common to mosques in Iran, with extensive blue tilework and high pointed archways.  The building is crowned with a strange cone-shaped dome which clearly hearkens back to pre-Islamic days.  The interior of the shrine is clearly revered by the local populace, and it is decked out in gold and other precious substances.  The tomb itself is highly decorative in a style usually reserved for distinguished Muslims.

The Tomb of Daniel is located within the city modern day city of Shush, approximately two-hundred and fifty miles southwest of Teheran close to the border with Iraq.  For those tourists who make it to Iran, Shush is relatively easy, safe and accessible.  Because the site is sacred to both Muslims and Jews, there have traditionally been minimal restrictions for pilgrims.  As of this writing, no other visitor information was available.  Web: www.tourismiran.ir (official tourism website of Iran)

Although Susa was upstaged long ago by other Persian cities such as Persepolis and Isfahan, it has always remained an important part of Persian history.  The Ruins of Ancient Susa on the outskirts of modern-day Shush are extensive and offer a glimpse of what life was like for the Jews in the days of the captivity.