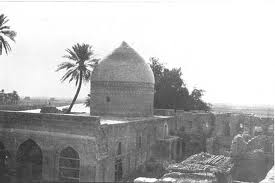 Ezra was one of the most prominent Jewish figures of the late Captivity period, and was chronologically the very last truly important person to appear in the Hebrew Bible.  Along with Nehemiah, he was instrumental in the restoration of Judea as a semi-autonomous province of the Persian Empire, and personally led many Jews back to Jerusalem in the early 5th century BC.  He was also credited with canonizing and restoring the Hebrew Bible to Judea, as well as establishing the council of learned priests, scribes, rabbis and other learned wise men that would later become known as the Sanhedrin.  In the twenty-four centuries since his death, the site of his tomb has been a place of pilgrimage for Jews and later for Muslims.  Though few Jews now visit, the shrine remains highly revered by the local Shi’ite community.

In the years following Persia’s conquest of Babylon, the condition of the Jewish people in Mesopotamia improved considerably.  Almost immediately, Jews were permitted to return to Judea, albeit in small numbers, and these were required to acknowledge the overlordship of Persia.  Nevertheless the Temple was rebuilt within a few decades, and a semblence of Jewish nationalism restored to Judea.  The only difficulty the Jews suffered during this period were the persecutions that occurred during the days of Esther, a nearly catastrophic event with a rare happy ending.

By the end of the 6th century BC, the Jewish people had established a solid foothold in Judea and Jerusalem.  But the population was tiny, and its cities and infrastructure were in a terrible state.  Few Jews were returning, most choosing to remain in Mesopotamia either by choice or restriction.  That situation changed over the next few decades, when the Jewish leaders Ezra, a descendent of the high priests, and Nehemiah, a member of the tribe of Judah who had risen high in the service of the Persian court, decided to get things moving again.

The exact timing is a bit confused, and it is not certain when the men were active in relation to each other.  But in the first half of the 5th century BC, they succeeded in breathing new life into the foundering Jewish colony in Judea.  Nehemiah served as the governor of the province of Judea for thirteen years, during which time he initiated a wave of new construction projects.  The greatest of these, and that for which he is most famous, was the restoration of the walls of Jerusalem which had been destroyed by the Babylonians.

Ezra, on the other hand, was more focused on the restoration of the Jewish religion and heritage, which had grown lax since in captivity.  He personally led five thousand Jews back to Judea, after which he read the entire Torah to the populace of Jerusalem in an effort to inspire and reinvigorate them spiritually.  Later, he established the precursor to the council of the Sanhedrin which would later become the supreme religious authority of the Jewish people.  According to some scholars, it was Ezra who finalized the composition and canon of the books which later became the Hebrew Bible.  For all of these accomplishments, he is considered by many to be the father of Judaism as we know it.  In later years he spent much time traveling back and forth between Judea and Mesopotamia, inspiring his fellow Jews to return.  He died in Mesopotamia sometime in the late 5th century BC.  His shrine was one of the most venerated sites in Iraq until the 20th century, when most of the local Jews emigrated to Israel.

The current shrine at the Tomb of Ezra was constructed in the 18th century, though earlier structures were present at least as far back as early Islamic times.  The site, located along the banks of a scenic stretch of the Tigris River, consists of both a mosque and a synagogue standing side-by-side, a virtually unique set-up that has existed since early Muslim times.  Visually, the shrine is dominated by the striking blue dome of the mosque.

The synagogue, although no longer used, is kept in good repair by the local Muslims.  According to tradition, the sarcophagas of Ezra was rediscovered in the 10th century by a local shepherd.  It was moved to the current spot, reburied, and the shrine erected above it.  Unfortunately, the famous iron sarcaophagas cannot be viewed.

The town of Al-Azair is located on the Tigris River close to the border with Iran, approximately seventy miles north of Basra and more than two-hundred miles southeast of Baghdad.  Due to the ongoing problems in the region, visiting at this time is difficult to impossible.  As of this writing, no other visitor information was available.  Web: Not Available

There is little in the way of other related Old Testament sites in the area.