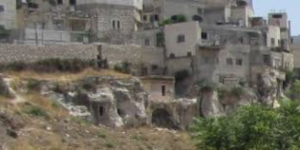 Rock Tombs from the Era of Isaiah (generationword.com)

Isaiah was the great Prophet of the City of Jerusalem.  He lived there, worked there and, according to both Jewish and Christian tradition, was martyred there.  The sites of both his martyrdom and his tomb are located on the Silwan side of the Kidron Valley south of the City of David.  However, both of these locations are based on Christian tradition, and were apparently much more revered in centuries past than they are today.  Nevertheless, both Christian and Jewish visitors make pilgrimages to these places, though not in such numbers as would be expected at the shrine of so important a Biblical figure.

Isaiah was the dominant Prophet in the middle of the era of the divided kingdoms.  He was one of the most important figures in the history of the Kingdom of Judah, and the years of his work were among the longest in the Hebrew Bible.  Little is said of his early ministry, though it is known that it began during the reign of King Uzziah and continued through the reigns of Jotham and Ahaz.  By the time Hezekiah took the throne, Isaiah was one of the most popular and influential men in the Southern Kingdom.

The major period of Isaiah’s ministry from a Biblical perspective took place during the reigns of Ahaz and Hezekiah, when the Assyrian Empire was busy laying waste to the Northern Kingdom of Israel.  In the days of the reign of Ahaz, Judah turned against Israel at the time of its greatest need, and even aided the Assyrians in the conquest of its northern neighbor.  They stood aside and allowed Samaria to be destroyed, and looked on as the people of the Ten Tribes were taken into captivity.  Although history has vilified Ahaz as a coward and even as a traitor for his decisions, in the end his actions did buy the Southern Kingdom time, and ultimately probably saved them from a similar fate.

That is where Isaiah came in.  In the wake of the disastrous conquest of Israel, Judah was at last forced to acknowledge its precarious strategic position.  When Hezekiah assumed the throne, he made an alliance with Egypt, the only remaining major power in the region with the might to oppose Assyria.  This backfired, encouraging the Assyrians to invade Judah, even to the point of threatening Jerusalem.  That might have been the end for the kingdom of Judah, and for Judaism, had not Isaiah encouraged Hezekiah to stay in the fight.  Isaiah and Hezekiah led the army of Judah out against the Assyrians, and what should have been an easy victory for the invaders turned into a disastrous rout.  The retreating Assyrians did not attempt to invade Judah again, and Jerusalem and the Temple continued to survive for another century.

While Isaiah was hailed in his day as the great hero-prophet of the Assyrian wars, it is for his future prophecies that he is best known in the present.  Along with Daniel, no other Old Testament figure prophecized more concerning the eventual coming of a Messiah and the end of times.  Isaiah’s ministry continued into the reign of Hezekiah’s successor, King Manessah.  According to tradition, Manessah had a falling out with the extremely popular prophet.  Fearing a threat to his throne, Manessah ordered Isaiah to be killed, and the prophet was taken to the nearby village of Silwan and sawed in half.  He was later buried on a hill near where he died.

The village of Silwan where the Tomb of Isaiah is located is now a suburb of Jerusalem in the Kidron Valley just south of the City of David.  The site identified as the tomb is on the hillside by the village.  There are actually three tombs there, the largest belonging to Isaiah (technically speaking it is actually a memorial site, and may not be the actual location of his grave).  A Greek inscription merely notes that the site is the “Place of Isaiah the Prophet”.

Not too far away is the location where Isaiah was killed.  This place is called the Tel el Minshar, which means the Hill of the Saw.  A tree on top of the hill supposedly marks the exact spot where the prophet was martyred.

Both the Tomb of Isaiah and the site of his martyrdom are close to many of Jerusalem’s other historic sites and are easily reached on foot or by public transportation.  No other visitor information was available as of this writing.  Web: www.goisrael.com (official tourism website of Israel)

There are at least two other places which claim to be the location of Isaiah’s gravesite.  The first is the Nahal Dishon Valley in the Galilee region, which makes little geographical sense considering the timeline.  Even more geographically unlikely is the Tomb of Isaiah in the Imamzadeh Ismail located in the Old Jewish Quarter of Esfahan in Iran, although local Islamic tradition very strongly supports this as the true site.