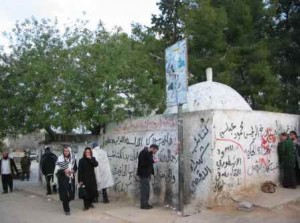 Of all of the major figures of the Exodus period, Joshua was the last survivor.  His life and death in the 14th century BC marked the end of Jewish prehistory and the beginning of the Israelite nation.  His tomb was the last major shrine associated with the Exodus to be constructed.  It has the distinction of being one of the most reliably known tombs from the pre-kingdom era, and is thus one of the oldest pilgrimage sites in Israel.  Since the final resting place of Moses was not known with certainty, and the tombs of Aaron and Miriam were far away, it was, and still is, one of the most popular sacred places related to the Exodus.

Joshua was a popular leader, and possibly the prince, of the tribe of Ephraim at the time of the Exodus.  A prominent figure in the flight from bondage and subsequent conquest of Canaan, he is arguably the third most important figure in the Book of Exodus after Moses and Aaron.  He was one of Moses’ chief followers from the beginning, and was the only person to accompany him up onto Mount Sinai when God bestowed the Ten Commandments on the Israelite prophet.

Joshua’s service became even more important during the forty year sojourn in the wilderness.  He served as both a military commander and a spy for the Israelites.  Along with Caleb of the tribe of Judah, he advised the Israelites to invade Canaan from the south.  Although they were voted down by the other tribes, it was their courage and leadership at this time which later led to the preeminence of the tribes of Ephraim and Judah.  Throughout the rest of their lives, the two men were both friends and rivals, though Joshua was always the more prominent of the pair.  Just before Moses died upon Mount Nebo, it was Joshua and not Caleb that he chose to lead the people into Canaan.

The subsequent military campaigns of Joshua in Canaan have since become legendary, beginning with his miraculous triumph over the mighty city of Jericho.  Joshua spent the remainder of his years conquering the petty kingdoms of Canaan, dividing the lands among the Israelite tribes and overseeing the settlement of the cities of the territory of Ephraim.  He established his own home at Timnath-Heres.  There he later died and was buried in what was probably Israel’s first state funeral.

As much as Moses was the savior of the Israelites from their bondage in Egypt, Joshua was the great hero who united the people and established Israel as a nation.  His tomb became a revered place, and was remembered and visited by pilgrims even in later years when the other great holy cities of Ephraim had waned in importance.  The ancient town of Timnath-Heres, now the Palestian city of Kifl Hares, still receives many visitors at what is the arguably the greatest surviving shrine of the Exodus period.

The Tomb of Joshua is a surprisingly unassuming place.  Occupying only a small street corner in the middle of downtown Kifl Hares, it can be easily mistaken for a walled compound of a typical residence of the neighborhood, such as might belong to a local middle class citizen.  Unfortunately, this sacred Jewish site is usually best recognized by the Arabic graffiti which is usually scrawled all over the outer walls.

The main building is a very simple affair: a white structure with a small dome, reminiscent of the Tomb of Rachel in Bethlehem.  The grave of Joshua, and possibly several other prominent Exodus leaders, lie beneath the dome.

The town of Kifl Hares is located in the Palestinian territory, not too far from Tel Shiloh, about twenty miles north of Jerusalem.  Because of its location, the Tomb of Joshua has had difficulties during the last few decades.  The site has been vandalized on a number of occasions, and the few Jewish pilgrims that still trickle in often come in the company of Israeli soldiers.  As of this writing no other visitor information was available.  Web: http://travelpalestine.ps (official tourism website of Palestine)

According to tradition, several other Exodus figures were buried at Timnath-Heres.  Notable among these possible sites is the Tomb of Nun, the father of Joshua.  Another is the Tomb of Caleb, Joshua’s friend and leader of the tribe of Judah.  The legitimacy of both of these claims is disputed, as the former probably died enroute to the Holy Land, while the latter was probably buried in the tribal territory of Judah.