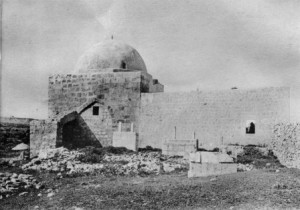 The town of Bethlehem is so closely associated with the birth of Jesus of Nazareth and the Christmas holiday that it is easy to forget the city’s Jewish heritage and the significant role that Bethlehem played in the Hebrew Bible.  First and foremost it is the location of the Tomb of Rachel, the second wife of the patriarch Jacob and the mother of Joseph and Benjamin.  The Tomb of Rachel is nearly as old as the Tomb of the Patriarchs in Hebron, and almost as revered, especially among Jewish women.  It is also one of the most definitively recognized holy sites of the patriarchal period, and because of its proximity to the Church of the Nativity, one of the most popular Jewish sites in Israel for non-Jewish visitors.

The history of Bethlehem as part of Jewish tradition begins long before the birth of Jesus.  Bethlehem was originally a fortified Canaanite town dating as far back as five thousand years.  It first appeared on the Biblical stage sometime around the 19th century BC.  Jacob, the grandson of Abraham, was then passing through the area that is now Bethlehem when his second wife Rachel gave birth to his twelfth and last son, Benjamin.  She died during the particularly difficult childbirth, and Jacob acquired a small parcel of land and buried her beside the road.

Centuries later, after the Israelite conquest of Canaan, Bethlehem was assigned to the territory of Judah.  Despite the fact that the tribe of Judah was not descended from Rachel, her tomb was revered both locally and in the larger Israelite realm.  Many early pilgrims began visiting the tomb as early as the days of the judges.  During this period, Bethlehem was home to Ruth, another prominent woman of the Bible.  Ruth was part of the line of the house of Judah, and her relocation to Bethlehem set the stage for the arrival of one of the city’s most famous figures: her great-grandson, David.

David’s family were members of the House of Judah who resided in Bethlehem.  After the death of Saul, David assumed the kingship over all of the Israelites.  After he was anointed by the prophet Samuel, the city of his birth became united Israel’s first capital.  In later years, Bethlehem was supplanted by Jerusalem, and in the ensuing centuries it quietly faded into obscurity.  Nevertheless, David’s descendents continued to revere Bethlehem as their ancestral home, even during the Babylonian Captivity.

It wasn’t until a thousand years later that Bethlehem skyrocketed back to importance.  During the now-famous census of Augustus Caesar around 5 BC, David’s famous descendents Joseph and Mary returned, and Bethlehem’s other famous son, Jesus of Nazareth, was born.  By the end of the 2nd century AD, Bethlehem as a Jewish holy site was eclipsed by countless Christians who swarmed to visit the site of the Nativity.  Nevertheless, overshadowed as it was, Bethlehem’s importance to Judaism never faded in all of the ensuing centuries, and Rachel’s Tomb is among the Jewish people’s greatest pilgrimage treasures.

While the Tomb of Rachel dates back to the days of the Patriarchs, the shrine above it is relatively recent.  The building which currently stands along the road leading out of Bethlehem was not constructed until the 19th century.  It consists of only two rooms, the antechamber and the shrine above her gravesite.  The latter is crowned by a dome, which suggests either Islamic or Byzantine construction, but the building was actually financed and built by Moses Montefiore, a British Jew.

The tomb itself dates back thousands of years, and its authenticity is considered as reliable as that of the Patriarchs in Hebron.  A large stone marks the gravesite, while eleven smaller stones rest upon it.  According to an unlikely tradition, these stones were put in place by Jacob’s eleven sons, Benjamin being a newborn infant at the time.

The Tomb of Rachel is located on the outskirts of Bethlehem, less than ten miles south of Jerusalem.  While Bethlehem lies within territory of the Palestinian authority, the Tomb of Rachel is technically outside of the town, and nominally under the jurisdiction of the Israeli government.  It is thus easier to visit then many other Biblical sites located in the West Bank.  In general the shrine is open to visitors daily from 1:30am-10:30pm except during the Sabbath and on holidays.  However, the tomb is subject to unexpected closings due to security reasons.  There is no cost of admission.  Web: www.keverrachel.com (official website)

Despite the numerous Biblical events that took place in and around Bethlehem, few specific locations have been identified with certainty.  The Field of Ruth where the loyal matriarch lived and worked lies outside of the town.