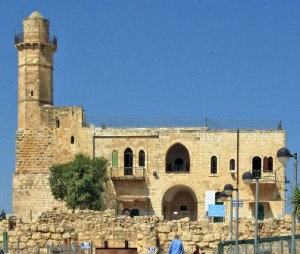 Samuel, the great prophet of Israel during the time of its transition from a confederation of tribes into a kingdom, was arguably the most important figure of the Hebrew Bible since the days of Moses and Joshua.  Though he was not a high priest, he was the last of the great Judges and the first of the great Prophets.  His life began in a land divided between twelve tribes and their princes; it ended in a land he united under one king.  Yet for all of his amazing accomplishments, he rarely, if ever, wandered more than twenty miles or so from his home in Ramah.  There he was born, and lived, and died.  The shrine where his tomb is located has the rare distinction of being both a synagogue and a mosque, equally venerated by Jews and Muslims.

Throughout the days of the Judges, the Israelites lived under the constant threat of its neighbors: Canaanites, Philistines, Amalekites, and many others warred unceasingly against the Israelites and with each other for control of the strategic and fertile land.  Despite their advantage in numbers, the Israelites failed time and again to defeat their enemies and secure the entire country permanently.  This situation was due first and foremost to the divisions, rivalries and even sporadic infighting which dominated life among the Twelve Tribes; and the worst among these were the powerful tribes of Ephraim in the north and Judah in the south.

The man that unified these two competing factions arose in the tiny, relatively insignificant territory of the Benjamites.  It was here in the town of Ramat that Samuel was born, and where he worked most of his life to forge the tribal territories into a single kingdom.  After studying under Eli, one of the greatest of the high priests of ancient Israel, Samuel wandered throughout the towns of Benjamin and southern Ephraim, and possibly in northern Judah as well.  Thanks to his commanding presence and lack of tribal ties, he rose above the petty bickerings of Ephraim and Judah and the other states, securing for himself a reputation of wisdom and fairness.

As the crises of the tribes mounted, the need for a strong central government became increasingly evident.  Samuel, by then the most trusted and respected man in Israel, briefly took the role upon himself, leading the Israelites to victory over the Philistines at the Battle of Mizpah.  After this, it was decided that the tribes needed a permanent and uniting king.  Samuel passed on the job for himself, anointing Saul in his stead.  He then continued his wandering and ministry among the central cities of Israel.  After many long years of travel, he died and was buried in his home city of Ramah.

Aside from being the home of Samuel, Ramah played virtually no other significant role in Biblical history.  However, Samuel’s tomb remained a sacred destination well after the Roman destruction of Judea, and several churches and mosques were erected in later years to commemorate the Israelite prophet.  According to tradition, when the knights of the First Crusade arrived at the end of the 11th century AD, they climbed the hill of Ramah, from whence they had their first sight of the city of Jerusalem.

Although the exact location of Biblical Ramah is disputed, the consensus is that it once stood in what is now the Palestinian city of Nabi Samwil.  There have been churches and other shrines on the site at least as far back as the Byzantine period.  Most of Nabi Samwil is located on the slopes of a hill, and the views are indeed excellent.  On a good day, Jerusalem can be seen off in the distance to the south, as the crusaders discovered.

The Tomb of Samuel is located towards the top of the city’s hill beneath what is currently a mosque.  The mosque, which only dates back a few hundred years, is an architectural assortment which incorporates bits and pieces from at least two earlier structures.  In one of the most unusual arrangements ever made between Muslims and Jews, an earlier synagogue was preserved underground where the actual tomb is located.  Both the synagogue and the mosque are in active use, and pilgrims from both religions regularly visit the site.

Nabi Samwil is located in Palestinian territory just a couple of miles north of Jerusalem.  Despite its location on the geographic edge of Israeli and Palestinian territory, the Tomb of Samuel enjoys a long history of cooperation, or at least tolerance, between its Jewish and Muslim visitors.  The Tomb of Samuel is generally more open and acoomodating to both groups.  No further visitor information was available as of this writing.  Web: www.goisrael.com (official tourism website of Israel)

Because the exact location of Ramah is unknown, it is possible that Nabi Samwel may actually have been the location of either Mizpeh, Bethel, Gibeon or Geba, all of which were nearby and closely associated with the life of Samuel.  The Field of Gibeon, where Samuel led the Israelites to victory over the Philistines, is located not too far from Nabi Samwil.