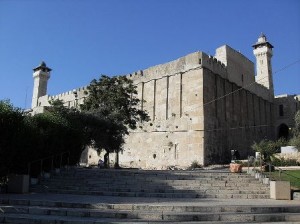 Tomb of the Patriarchs (wikipedia.com)

The Tomb of the Patriarchs, also known as the Cave of Machpelah, was the first great place of pilgrimage in ancient Israel, and one of the world’s oldest major religious shrines in general.  According to a very old tradition, it is the place where the patriarchs Abraham, Isaac and Jacob are buried, along with their wives.  The greatest of all patriarchal shrines, the site is highly revered not just by Jews but by Christians and Muslims as well.  For many Jews it is considered to be the second holiest site in the world after the Temple Mount in Jerusalem.  While the shrine above the cave was built at a much later period, it still dates back to the days of the Herodian kings, making it one of the most enduring Jewish religious sites still in operation.

Some time around the 19th century BC, after years of sojourning in the region between Beersheba and Hebron, Abraham purchased the Cave of Machpelah from one Ephron the Hittite for four hundred silver shekels.  It was originally intended for use as a sepulcher for his wife Sarah, but over the next century it became a family tomb, with Abraham, Sarah, Isaac, Rebecca, Jacob and Leah all buried within.  The body of Jacob was brought back from Egypt by his sons in what was effectively a state funeral and was probably the last to be interred within the cave.  Of the patriarchal family, only Ishmael, the older son of Abraham, Hagar, the mother of Ishmael, Esau, the older son of Isaac, and Rachel, the second wife of Jacob, are not buried at the site.

Following the return of the Israelites to Canaan after the Exodus, Hebron became an important center of Hebrew political and religious life.  It was assigned by Joshua to the territory of the tribe of Judah, and briefly served as capital of the united kingdom of Israel during the early reign of David, who was also anointed here.  After David’s reign, Hebron no longer played as central a role in Israelite history.  However, the Israelite and subsequent Jewish communities continued to survive in Hebron almost continually over the centuries, even during the Captivity and Diaspora periods.  Hebron may have the oldest continual Jewish community in existence.

After the Bar Khokba Revolt in the 2nd century AD, Hebron and the Tomb of the Patriarchs changed hands numerous times.  From the Romans it transferred to the jurisdiction of the Byzantine Empire and the auspices of the Eastern Orthodox Church.  Later it was seized by Muslims, Latin Crusaders, and finally by the Mamluks.  Each subsequent conquerer apparently treated the site with reverence, and unlike virtually all other shrines in the Holy Land, the Herodian structure remained intact.  Under the various Islamic dynasties Hebron became a major pilgrimage destination for Muslims, and though Jews continued to venerate the shrine, by the end of the 13th century, they were barred from entering.

In the ensuing years the fortunes of the Jews of Hebron slowly ebbed, until the 20th century when significant numbers began to return to the area.  Religious tensions between Hebron’s Jews and Muslims broke out in open hostility in 1929 when many settlers in the area were killed and the rest forced to flee.  Over the next thirty-eight years, Jews were kept out of Hebron and all signs of Jewish habitation were destroyed.  This state of affairs continued until 1967, when Israel annexed the city, and Jews visited the shrine for the first time in centuries.  While the Tomb of the Patriarchs has since been returned to Palestinian jurisdiction, it is now open to visitors of all faiths.

The Tomb of the Patriarchs consists of the Roman-era shrine above and two caves below.  The shrine was originally constructed by Herod the Great towards the end of the 1st century BC.  There is no evidence that a significant religious structure existed on the site prior to this, other than the burial caves themselves.  The construction style is similar to other major Herodian projects of the period, and the exterior appears much the same today as it did two thousand years ago.  The caves below the shrine were sealed up for centuries and only in recent years have they been reopened and excavated.  A number of Israelite artifacts dating back as much as three thousand years have been discovered within.

The bodies of the patriarchs and their wives are interred beneath a trio of mausoleum-like Cenotaphs.  Presumably at one time they were located inside the caves, but were moved to their present resting places at a later date.  Abraham and Sarah are in the center, Isaac and Rebecca are on the east side and Jacob and Leah are on the west.  As the shrine changed hands through the centuries, new conquerors upgraded and embellished the Tomb, particularly the interior.  Byzantines, Muslims, Crusaders and Mamluks all contributed to the current structure.  The Cenotaphs are of Islamic origin, as is the altar, which was donated by Saladin in the 12th century.  The ceiling of the shrine was built and decorated during the Crusader period, and reflects similar church construction of the period.

The Cave of Machpelah is located near the center of Hebron approximately twenty-five miles south of Jerusalem.  Unfortunately, Hebron has been mired in the Israeli-Palestinian conflict for decades, and access to both the city and the shrine are carefully controlled both for religious and security reasons.  Because of this, all visitor information is subject to change at any time.  According to the most recent information available, there is limited access to the shrine year-round from 4:00am-9:00pm, except on Fridays during Ramadan.  Full access to the site is allowed for Muslims and Jews on only a handful of days each year.   There is no cost of admission.  Web: www.machpela.com (official website)

According to tradition, the Cave of Machpelah is also one of the possible burial sites of Adam and Eve, though there is no archaeological, historical or biblical evidence to support this claim. However, many other important Biblical figures are buried in Hebron.  Among the more important sites are the Tomb of Jesse, father of king David, and the Tomb of Ruth, Jesse’s grandmother and herself a prominent Biblical figure.  Also in Hebron are the Tomb of Avner ben Ner, an important courtier of Saul and David, the Tomb of Othniel ben Kenaz, the first Judge of Israel, and King David’s Pool.