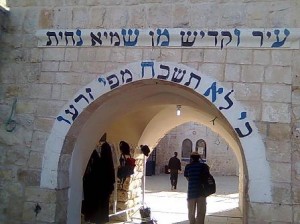 The city of Safed along modern Israel’s northern frontier is considered to be one of Israel’s Four Holy Cities along with Jerusalem, Hebron and Tiberias.  This consideration is due largely to the city’s connection to Shimon bar Yohai, the first prominent rabbi in Palestine after the Bar Kokhba Revolt, the author of the Zohar and the founder of Kabbalism.  Although some question Safed’s special distinction, there is no denying its importance in Jewish history.  Safed was one of the last places in ancient Israel to boast a significant Jewish population, and it was one of the first places where Jews returned from the Diaspora and resettled during the Ottoman period.  Many thousands of pilgrims come every year to study Kabbalah and pay homage at the tomb of Shimon bar Yohai.

In the years between the Great Revolt and the Bar Kokhba Revolt, the Jews in northern Israel retained some measure of religious freedom under the leadership of the surviving Sanhedrin.  However, the Bar Kokhba Revolt truly rankled the Roman Empire, and in response a purge of the Jews and Judaism was undertaken throughout Palestine.  This was true even in the north, where Jewish resistance to Roman rule had been relatively light.  Many Jews of Palestine were killed, imprisoned, deported or otherwise forced to renounce their faith.

During this period, Rabbi Shimon bar Yohai, arguably the first truly important Jewish spiritual leader of the Diaspora, fled to the city of Safed on the Syrian frontier where he continued to study and write in secret.  Bar Yohai had already become famous among the Jews of Galilee for having cleansed the city of Tiberias of the taint of the Herodians.  It was while Shimon bar Yohai was in Safed that he wrote the Zohar.  The Zohar, the earliest text associated with Jewish mysticism, would later become the central philosophical work around which the practice of Kabbalah would be based.

Although an extra-Talmudic discipline, some of the Kabbalah’s teachings were later incorporated into Talmudic study.  While not compulsory, understanding of the Kabbalah became an important, or at least popular, component of Rabbinical studies in many Jewish communities.  The city of Safed was the unofficial center of the study of Jewish mysticism throughout much of the Diaspora and remains one of that discipline’s most sacred places even to the present day.

During the 5th century, the council of the Sanhedrin was permanently disbanded in Palestine, though it continued to live on in one form or another in other places.  However, small pockets of Jews continued to cling tenaciously to survival in Tiberias and Safed, the spiritual centers of the Jerusalem Talmud and the Zohar, respectively.  A little over a thousand years later, when the Ottoman Empire decided to attempt to repatriate Jews to Palestine, the city of Safed became the first restored Jewish city with a measure of automony.  This was the last serious attempt at restoring Judaism to Israel prior to the 20th century.

The Tomb of Shimon bar Yohai is actually located in the Safed suburb of Meron, which in turn is located on the lower slopes of Mount Meron, the highest mountain in Israel.  The modern city stands on the ruins of an ancient settlement of the same name.  The tomb is a large, almost fortress-like affair crowned with a dome.  The interior of the shrine is segregated to accommodate male and female visitors separately.  The site where bar Yohai is buried is marked by a fenced-in stone memorial.

Highly revered, especially among Hassidic Jews, thousands of pilgrims visit the Tomb of Shimon bar Yohai every year, with the number peaking in the tens of thousands on the anniversary of his death.  Meron is also the site of many other tombs of famous Diaspora-era rabbis who spent their lives trying to follow in Bar Yohai’s footsteps.

The city of Safed, also known as Tzfat, is located at the extreme northern end of Israel, just about a hundred miles north of Jerusalem.  Meron, where the tomb is actually located, is approximately three miles west of Safed.  As of this writing, no other visitor information was available.  Web: www.safed.co.il (official city website of Safed)

The city of Safed itself hosts a number of related sites.  Among these are the Abuhav Synagogue and Caro Synagogue, both of which were once important places of study during the Diaspora and both of which house important ancient Torah scrolls.   There are also numerous cemeteries in which many prominent rabbis and scholars are buried.  Among these is the Idra Cave where some of bar Yohai’s disciples and others are entombed.  According to tradition, Noah’s son Shem and his grandson Ever are buried in the Shem va’Ever Cave.  Also, the Israeli Bible Museum houses a fine collection of the religious paintings of Phillip Ratner.  For those seeking more of Shimon bar Yohai’s legacy, there is also the Cave of Bar Yohai in Peki’in, which is still revered as the location where that famous rabbi and his son lived in hiding in the years after the Bar Kochba Revolt.  Also close to bar Yohai’s shrine are the Tombs of Hillel and Shammai.