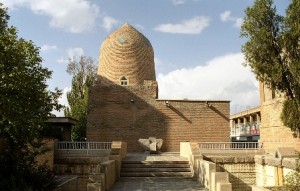 Tomb of Ester and Mordecai (wikipedia.com)

From the time of the Babylonian Captivity until the 1800s, Western Persia was home to one of the largest and most important communities of Jews-in-exile.  This was particularly after the triumph of Christianity in the west, when many of Judaism’s most prominent leaders and religious experts migrated east.  The Jewish tradition is strong in the region between Hamadan and Susa, where many of the original exiles from Judah resettled.  Hamadan, in particular, is closely associated with Esther, the Jewish Queen of Persia who was instrumental in both saving her people and in helping them regain their territorial birthright.  For more than two thousand years the Tomb of Esther and that of her Uncle Mordecai have been a spiritual focal point for the Jews of Iran, though few now regularly visit.

After the conquest of the Kingdom of Judah and the destruction of Jerusalem by Babylon in the 6th century BC, the majority of surviving Israelites, or more specifically Judaites, were sent into exile in the Babylonian heartland, many of whom later relocated east of the Tigris River in what is now Iran.  They settled for the most part in and around Hamadan and Susa, and despite their exile and their hardships, the Jews maintained their identity as a people, something the northern tribes had been unable to do during the Assyrian Captivity.  The Babylonian Captivity only lasted for little more than half a century, for the Babylonians were soon conquered in turn by the Persians, who were more open minded when it came to their subject peoples.

The pivotal Biblical event of the period of the Babylonian Captivity was the marriage of a Jewish girl named Esther to the Persian Emperor Ahasuerus.  Because of her influence with the Emperor, an attempt to slaughter of all Jews in Persia was narrowly averted.  The would-be perpetrator of the genocide, the Emperor’s advisor Haman, was put to death, and the Jews were permitted to return to their homeland as subjects of Persia.  Despite the miraculous events wherein Esther probably saved the majority of her people, she was not destined to ever see the Promised Land again.  For the rest of her life she remained by the side of Ahasuerus, along with her uncle Mordecai, who became one of the Emperor’s closest advisors.

Esther probably died around 500 BC, and was buried in the city of Hamadan along with her uncle.  Later, when the Jews were permitted to return to Palestine, many decided to stay in Hamadan, in part due to their loyalty to Esther, but also because many had become quite settled in their new homes there.  For the next twenty centuries, the Jewish communities of Persia and Mesopotamia remained among the largest and most influential in the world.  After the final dispersion of the Sanhedrin Communities in Judea in the 4th century AD, the Jewish leaders of Persia became the defacto supreme arbiters of Jewish law and practices.

The Jews of Persia remained an important cultural and religious presence in the Islamic east until the 19th century, when they at last began migrating back to the west, a process which has greatly accelerated in the second half of the 20th century.  While the surviving Jewish population of Iran is now very small, the Mausoleum of Esther and Mordecai remains the pilgrimage center of the Iranian Jewish community, though far fewer pilgrims seem to make the dangerous visit nowadays.

The Shrine of Esther and Mordecai is a relatively small structure marked by a domed tower.  Although it appears much older due to its extremely simple and austere architectural style, the shrine only dates back to the 13th century.  An arched, late Persian-style entrance is a giveaway to the shrine’s builders and true age.

While Hamadan is a hundred and fifty miles west of Teheran, its location close to several major highways makes it surprisingly accessible to several major cities in northern Iran.  Other than distance, there are otherwise no restrictions to visiting the shrine.  It is open year round from 8:00am-7:00pm.  Admission is IR20,000.  Web: www.tourismiran.ir (official tourism website of Iran)

There is little in the way of other related Old Testament sites in the area.