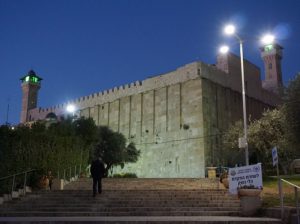 The Tomb of the Patriarchs, Hebron

For many people who visit Israel as a pilgrimage, the prime destination, of course, is the Holy City of Jerusalem. Typically added to this are visits to Tel Aviv, Northern Israel, the fortress at Masada and the Dead Sea.  In addition, many travelers will venture a short distance into the West Bank in order to visit Bethlehem.  But due to concerns over safety or time constraints, very few pilgrims go further than this.

Which is a shame, because when it comes to sites of Biblical interest, especially the earlier books of the Old Testament, most of the action took place in what is now the West Bank. Virtually all of the major events that occurred in the Holy Land from the time of Abraham’s arrival until David’s conquest of Jerusalem took place in areas that are now part of the Palestinian authority.  The tombs of Biblical figures from the days of the Patriarchs to the days of the Judges abound here, a wealth of historic treasures utterly neglected by the vast majority of visitors to Israel.  Here are some of the best:

The Tomb of the Patriarchs (aka The Cave of Machpelah)

When it comes to Biblical tombs in the West Bank (or anywhere for that matter), the Tomb of the Patriarchs in Hebron is the gold standard.  The second holiest site in Judaism after the Western Wall in Jerusalem, as well as the fourth holiest site in Islam, the Tomb of the Patriarchs was also recently recognized as a UNESCO World Heritage Site, and for good reason.  Buried here are the great patriarchs, Abraham, Isaac and Jacob, along with their wives, Sarah, Rebecca and Leah.

Although the patriarchs lived over 3,800 years ago, the tradition of this site being the location of their tombs goes back thousands of years, with much of the current building dating back to the time of Herod the Great.  Technically buried in a cave deep beneath the shrine, what visitors to the tomb see are cenotaphs built in recent centuries.  The cenotaph of Jacob and Leah are in a synagogue on the Israeli side, while that of Isaac and Rebecca are in a mosque on the Palestinian side.  Those of Abraham and Sarah are in the middle and partially visible from both sides.

The Tomb of Rachel

Jacob, who was later renamed and became the father of the tribes of Israel, had two wives.  He is buried with the first, Leah, in Hebron.  But his beloved second wife, Rachel, was not in Hebron when she died.  She passed away after giving birth to her second son, Benjamin, just outside of what is now Bethlehem, and there Jacob buried her.

Today Rachel’s Tomb is one of the most controversial religious sites in the Holy Land.  Technically located on the outskirts of the modern city of Bethlehem, it is still considered part of that city in the West Bank.  However, when Israel constructed the security wall around Bethlehem, they cut the tomb off from the Palestinian side.  It is now extremely difficult for anyone to visit.

The Tomb of Joseph

The last major tomb of the patriarchal period is that of Joseph. While all of the sons of Jacob lived out the rest of their lives and presumably died in Egypt, the Bible only explicitly talks about what happened to Joseph.  Joseph was initially buried in Egypt, but after four centuries in captivity, the Israelites exhumed his sarcophagus and brought it with them on their journey through the wilderness.

Upon arriving in the Promised Land, Joseph was reburied near ancient Shechem, or modern-day Nablus. This was in the territory of Ephraim not too far from the lands of Menasah, reasonably close to the heart of the tribal lands where it became a national shrine.  In recent years the area around the tomb has seen clashes between Palestinians and Settlers and is not regularly open to visitors.

The Tomb of Joshua

Joshua was one of the most important transitional figures of the Old Testament.  While it was the Great Prophet Moses that led the Israelites out of Egypt, it was Joshua who, more than anyone else, was the father of ancient nation of the Israelites.  After Moses’ death at the end of the Exodus, Joshua led the conquest of much of Canaan and established the original boundaries of the tribal states.

As descendent of Joseph and leader of the tribe of Ephraim, Joshua was buried in the tribal territory of Ephraim in the city of Timnath-Heres.  This is associated with the modern-day city of Kifl Hares.  According to tradition, Nun, the father of Joshua, and Caleb, head of the tribe of Judah at the time of the Exodus, are buried here as well.

The Tomb of the High Priests

Also believed to be here is Abishua, who is credited by some with writing the first Torah.  Other traditions suggest that the Prophet Ezra may be buried here, as well as some or all of the first Seventy Elders of Israel.

Honorable Mention: The Tomb of Moses

According to the Jewish and Christian traditions, Moses did not die, but was whisked away directly to Heaven at the moment he turned 120.  However, in Islamic tradition, Moses died in what is now Jordan, and his body moved to the Promised Land by the Israelites after their conquest of Jericho.  He was buried not too far away from Jericho at the hill now called Nabi Musa.  Religious Jews generally reject the site as legitimate.