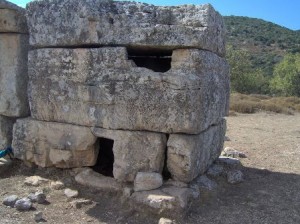 Because the town of Safed in northern Israel is so closely associated with the famous Jewish sage Shimon bar Yohai, it is easy for visiting pilgrims to overlook the city’s other important shrines: those of Hillel the Elder and Shammai.  These two theologians, who preceeded such giants as Shimon bar Yohai, Akiva ben Joseph and Gamaliel, founded important schools of Jewish religious and legal thought that ultimately laid the groundwork for both the Talmud and rabbinic Judaism.  Together these two schools became the foundation of Jewish beliefs and practices that dominated Jewish life from the fall of the Second Temple until the present day.  The tombs of both Hillel and Shammai can be found in the Safed suburb of Meron, and though they stand in the cultural shadow of Shimon bar Yohai, few pilgrims to Meron should leave without paying these two philosophical masters their respects as well.

Hillel the Elder is considered by many to have been the greatest Jewish theologian during the early period of the Roman occupation of Judea.  Born into the Jewish community of Babylon, Hillel relocated to Judea sometime in the early- to mid- 1st century BC.  There he distinguished himself as a scholar and theologian, becoming active with the religious party known as the Pharisees.  By the late-1st century BCE, Hillel had become the head of the order of the Pharisees and had established the rabbinical school which later came to be known as the House of Hillel.  He also wrote some of the earliest passages that were later incorporated into the Mishnah, the core text of the Talmud.

If Hillel the Elder was the greatest Jewish philosopher of the early Roman era, than Shammai was undoubtedly runner up.  A much younger man than Hillel, perhaps by as much as sixty years if the dates of Hillel’s life are to be believed, the two men were probably simultaneously active only for a few years.  Like Hillel, Shammai became a renowned theologian in his time, and also established a school for rabbinical studies.  Also like Hillel, Shammai was an important contributor to the ideas and writings that would be incorporated into the Mishnah.

Hillel and Shammai, and their respective schools, developed a rivalry that would come to dominate Jewish religious life through most of the 1st century AD.  Shammai espoused a more orthodox philosophy which were predominant among the Sanhedrin, especially in the final years leading up to the Great Revolt.  Hillel taught a more progressive philosophy which would come to dominate Jewish life in the years after the fall of Jerusalem and the destruction of the Great Temple.  The rivalry was a prominent part of Temple politics in the Roman period, due in large part to the leadership positions in the Sanhedrin being held by the two men and their followers.

Despite the Hillel-Shammai rivalry, relations between the two schools was, according to most accounts, quite cordial.  Debates between the two factions were apparently lively and more often than not productive.  Nevertheless, when Shammai’s faction came to dominate the Council of the Sanhedrin, Shammai made it clear who was in charge by dictating a number of ordinances deliberately confounding to the followers of Hillel.  However, Hillel ultimately won out, and it was that school which came to dominate the academies in Galilee and Babylon after the fall of Jerusalem.  At the end of the day, both Hillel and Shammai were incredibly pivotal figures in the establishment of rabbinical Judaism, and are among the most honored Jews of the Roman period.

The Tomb of Hillel the Elder is located not too far away from that of Shimon bar Yohai, and is thus very easy to visit in tandem.  Unlike bar Yohai’s substantial shrine, Hillel’s tomb is rather humble.  Almost devoid of markings or fanfare, Hillel’s sepulcher is located in a rocky cave on the hillside.  Only the fact that the entrance has been hewn into a square shape gives any indication of anything unusal about it.  A small pool of water near the tomb is reputed to have miraculous properties.

The Tomb of Shammai is located further away from the shrine of bar Yohai, at the bottom of the hill and close to the banks of the Meron River.  While not particularly flashy, it is a more substantial affair than the Tomb of Hillel.  It consists of a sizeable mausoleum built with very large hewn stones.  Unlike most other ancient tombs in Israel, which often exhibit later construction, the entire Tomb of Shammai actually dates from the 1st century AD.

The city of Safed, also known as Tzfat, is located at the extreme northern end of Israel, just about a hundred miles north of Jerusalem.  Meron, where the tombs are actually located, is approximately three miles west of Safed.  Both tombs are open sites.  As of this writing, no other visitor information was available.  Web: www.safed.co.il (official city website of Safed)

There are a number of other major sites in the area, notably the Tomb of Shimon bar Yohai.  The city of Safed itself hosts a number of related sites.  Among these are the Abuhav Synagogue and Caro Synagogue, both of which were once important places of study during the Diaspora and both of which house important ancient Torah scrolls.   According to tradition, Noah’s son Shem and his grandson Ever are buried in the Shem va’Ever Cave.  Also, the Israeli Bible Museum houses a fine collection of the religious paintings of Phillip Ratner.