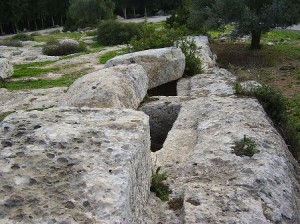 Tomb of the Maccabees (wikipedia.com)

The Modi’in Valley northwest of Jerusalem was ground zero for many of ancient Israel’s wars, from Joshua’s battles against the Canaanites to the desperate Jewish struggles for independence against Rome.  However, it is most famous as the region where the Jews, under the leadership of the Maccabee family, launched their rebellion against the Seleucids in the 2nd century BC.  It was from here that the Maccabees began the guerilla campaign that eventually led to the liberation of Jerusalem and the restoration of a fully autonomous Jewish state for the first time in four centuries.  For the Maccabees, and the subsequent Hasmonean dynasty, the Modi’in Valley was hallowed ground.  The valley is filled with burial sites, some of which are believed to be those of early Hasmonean leaders.  The tombs of Modi’in have become a popular pilgrimage destination during the Hanukkah week.

The Modi’in Valley was one of the major crossroads of ancient Israel.  It was a stronghold of the Canaanites when the Israelites first arrived, and numerous battles were fought here between Israelites, Canaanites and Philistines during the period of the Judges.  It was likely the site of clashes between the kingdoms of Israel and Judah as well.  A not particularly hospitable terrain, there were few large settlements in the Modi’in in ancient times.  However, the valley’s rugged landscape and strategic location between Jerusalem and the sea made it the perfect hideout for fugitives and rebels.

During the years of the Assyrian and Babylonian captivities, the Modi’in probably experienced an influx of refugees from both Israel and Judah.  These were the fiercely independent and the desperate individuals who refused to acknowledge the foreign rulers.  In later centuries their descendents became the core of the Jewish resistance against the Seleucids, one of a succession of Greek empires that began with the conquest of Alexander the Great and which had been in control of Judea for well over a century and a half.  Severely disliked by the Jewish population which had enjoyed so much automony under the previous Persian rulers, the Seleucids were constantly at odds with the Jews. 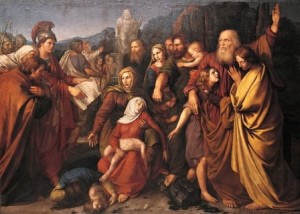 The Maccabees by Statler (wikipedia.com)

The tension between the Seleucids and their Jewish subjects worsened at the beginning of the 2nd century BC, when efforts to Hellenize the Jews became more strenuous.  A boiling point was reached in the year 167 BC, when the Seleucid king Antiochus all but outlawed the practice of Judaism and erected a statue of the god Zeus in the Great Temple of Jerusalem.  A Jewish priest from Modi’in named Mattathias killed a Jew who was about to make a sacrifice on a pagan altar, thereby launching the Maccabean Revolt.

The revolt was carried out by Mattathias’ five sons, notably Judah the Maccabee, which means ‘hammer’.  Based in the Modi’in Valley and the hills of central Judea, the Maccabees waged a guerilla war of great intensity and religious fervor.  The well-coordinated revolt overwhelmed the numerically superior and better-equiped Seleucid armies, who were forced to withdraw from Jerusalem.  The Maccabees entered the Holy City in triumph and reconsecrated the Temple.  A few years later the Maccabees would be established as Judea’s new ruling Hasmonean Dynasty.  At the height of the revolt, the Modi’in Valley became not only an important military base, but the site of many graves and tombs of valiant Jewish warriors who died in the fight for freedom.

The Valley of Modi’in is a rugged but beautiful region.  The modern town of Modi’in stands on or near the location of the ancient village of the same name.  Because of the nature of the guerilla-style warfare fought against the Seleucids, it is difficult to pinpoint where any major battles might have taken place.  However, skirmishing probably occurred all over the valley as the Seleucids tried desperately to stamp out the Jewish rebels.

The Tombs of the Maccabees is something of a misnomer.  Maccabee, the honorary name given to Mattathias’ son Judah, became a nickname for both the Hasmonean family as well as for the rebel army.  There are many tombs in the valley which belong to the Macabees, which is to say the rebel fighters and not necessarily the Hasmoneans.  However, it is believed that the actual Tomb of Mattathias is around here somewhere.  Archaeological investigations in the area are ongoing.

The Modi’in Valley is located along a stretch of the major highway between Jerusalem and Tel Aviv, about halfway between the two metropoli (about twenty miles from each).  That part of the Modi’in Valley where the tombs are located is an open site.  No further visitor information was available as of this writing.  Web: www.goisrael.com (official tourism website of Israel)

There is little in the way of other related sites in the area.