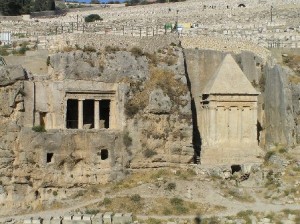 The Twelve Minor Prophets, as they are usually collectively referred to, are among the last major figures to appear in the Hebrew Bible.  Covering a period of about three centuries, the activities of the Twelve Minor Prophets are generally associated with Assyrian and Babylonian conquests and the downfall of the divided kingdoms, as well as the restoration of Judea.  Their ministries focused on turning the people of Israel and Judah away from sin, preparing them for the coming tribulation of the captivities, and aiding the survivors to cope with the national tragedy.  They were active in Israel and Judah, and in the Assyrian, Babylonian and Persian empires.  Their tombs and gravesites can be found in cities throughout the Middle East.

The age of the Prophets, both major and minor, can roughly be divided into three periods.  The first period largely revolved around the Northern Kingdom of Israel and the events that led up to its conquest by Assyria.  Approximately half of the Minor Prophets are associated with this era.  Jonah and his mission to Nineveh was the earliest of these, though it is possible that Joel came earlier.  Amos, Hosea and Micah, who were roughly contemporaries, worked diligently to turn the people of the Northern Kingdom of Israel away from sin in the decades immediately leading up to the Assyrian conquest.  Unfortunately their efforts could not keep the northern tribes from catastrophe.  While the next Prophet, Nahum, lived after the fall of Samaria, his prophecies were concerned with the fate of Assyria, and so he is sometimes included with this earlier group.

The second period of the Prophets revolved around the events leading up to the destruction of Jerusalem by the Babylonians.  This included the ministries of Zephaniah and Habakkuk, and possibly Obadiah, though the latter is difficult to date.  Unfortunately, like their predecessors in the north, they too failed to save their kingdom from destruction.  However, their efforts paved the way for the survival of the people of Judah in captivity, and for the final period of the Minor Prophets.  These were Zechariah and Haggai, whose prophetic ministries took place in the years of Judah’s return to Jerusalem; and Malachi, the last of the Old Testament Prophets, who appears to have been active about a century later.

While information on these important Biblical figures varies, for the most part their biographies are sketchy at best, non-existent at worst.  Nevertheless there are ancient sites associated with most of them.  Unfortunately most of these are problematic either geographically or archaeologically speaking, including some of which have more than one claimant as being the true tomb:

There are many places associated with Jonah, including three locations that claim to be his tomb.  The site that Judaism recognizes to be Jonah’s tomb is in Sarafand in Lebanon.  There are no traditions or information concerning Joel, Amos or Obadiah.  Because the Minor Prophets lived in such turbulent times, it is difficult to say which sites are legitimate and which are dubious.  The strongest case seems to be for the burial sites of Zechariah, Haggai and Malachi, who lived in Judea after the return from the Babylonian Captivity.  There are also strong claims concerning Hosea’s tomb in Safed.

The three post-Captivity prophets, Zechariah, Haggai and Malachi, are all buried in the Old Jewish Cemetery on the Mount of Olives in Jerusalem.  There is considerable skepticism concerning the authenticity of these tombs, as their construction reflects styles that would not be used for several more centuries.  However, the antiquity of the cemetery is such that it is quite possible that the prophets were buried here and the tombs above reconstructed at a later time.

While the Tomb of Hosea in Safed would be the oldest, the fact that it is in Safed, a city that survived the ravages of history better than many other places in the Holy Land, lends credence to the claim.  Hosea’s gravesite is located within the Jewish Cemetery of Safed, which, like the cemetery on the Mount of Olives, is among the region’s oldest and most important.  The tomb, which is carved into the hillside, is enclosed by a wall and a small domed roof that date from a later period.

The tombs of Zechariah, Haggai and Malachi can be found a short distance to the northeast of Jerusalem’s Old City.  The tomb of Hosea in Safed is in the Galilee region approximately one-hundred and forty miles north of Jerusalem.  Both of these cemeteries are open sites.  As of this writing, no other visitor information was available for these sites.  Web: www.goisrael.com (official tourism website of Israel); www.safed.co.il (official tourism website of the City of Safed)

Besides the above locations, there is a very strong tradition of the Tomb of Habakkuk being in Toyserkan, Iran.  His burial site has long been a pilgrimage destination for Muslims.  However, while this claim cannot be ruled out, the historical timeline and geography of the claim are very difficult to reconcile, and few Jews recognize the site’s authenticity.