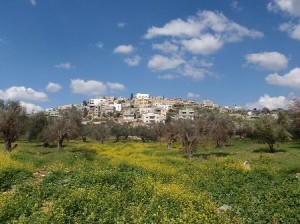 Though Aaron himself never made it to the Promised Land, his sons and grandsons did.  These were the first high priests of Israel, and were personally responsible for the care of the Tabernacle, the Ark of the Covenant and other important artifacts.  Some of Aaron’s descendents, including Eleazar, Ithamar and Phinehas, were buried here on what is known in the Bible as the Hill of Phinehas.  Because of the presence of these tombs, the Hill of Phinehas was a place of particular importance to the priesthood, and was probably an important, if not mandatory, place for all Levite priests to visit in ancient times.  A lesser known site located in Palestinian territory, the Tombs of the Sons of Aaron is relatively virgin territory for intrepid religious travelers.

During the days of the Exodus, it was established that Aaron would serve as High Priest of Israel, originally a ceremonial position whose job it was to see to the care of the Tabernacle and the Ark of the Covenant.  Upon his death, Moses personally saw to it that Aaron’s sacred garments, and therefore his position, were passed on directly to Aaron’s son Eleazar.  This act, almost an afterthought at the time, had enormous political consequences for the high priesthood, which became a heredity position to be held only by Aaron’s descendents.

Aaron had four sons, all of whom served as priests during the Exodus.  However, his two oldest, Nadav and Avihu, mistakenly used the wrong fire in one of their sacrifices, and were smitten by God on the spot.  The two younger sons, Eleazar and Ithamar, were left to oversee the spiritual lives of the Israelites, and all future priests of Israel would be descended from them.  In theory, all Jews who bear the name Cohen even down to the present day are descendents of either Eleazar or Ithamar.

Eleazar was high priest at the time of the Israelite’s entrance into Canaan.  His brother Ithamar was in charge of the day-to-day affairs of the other Levites, while his son Phinehas served as the overseer of the nation’s religious fidelity, a Grand Inquisitor of sorts.  Because of the family’s importance, the descendents of Aaron were assigned one of the Levite cities, Gibeah, as their own personal territory.  Strangely, they did not settle at Shiloh or Gilgal, where the Tabernacle and First Atlar, respectively, were set up.  Gibeah became a priestly retreat, where many of the descendents of Aaron lived and died.  The brothers Eleazar and Ithamar were buried there, as was Phinehas and his son Abishua.

Little is known of Gibeah after this period, though it almost certainly remained an important center of priestly life at least throughout the period of the Judges.  Like Shiloh, Gibeah probably lost most of its ancient prestige when David made Jerusalem the religious capital of Israel.  In later years it is possible that the tombs at Gibeah may have been revered by the citizens of the Northern Kingdom and later the Samaritans.

The tombs of the sons of Aaron can be found in the small village of Awarta, just outside of the larger city of Nablus.  While local Muslims have historically taken good care of these shrines, access to Jewish visitors is extremely limited.  The Tombs of Eleazar and Ithamar can be found on the west-center part of Awarta, and consist of large burial mounds contained inside a court adjacent to the town’s picturesque mosque.

The Tombs of Phinehas and Abishua are located on a small hill, known as the Hill of Phinehas, just outside of Awarta.  The tomb of Phinehas is a more substantial stone structure more along the lines of other typical prominent Jewish mausoleums throughout Israel and Palestine.

Despite the fact that Nablus is a major city barely fifty miles north of Jerusalem, its location deep inside Palestinian territory make it and its local sacred sites extremely difficult for Jews to visit.   Nablus is an extremely high security area, making visits to the city’s shrines very difficult (visitor restrictions at best, outright dangerous at worst).  During some years Jewish access to the various tombs in Nablus is restricted to a mere one day a year.  As of this writing, no other visitor information was available.  Web: http://travelpalestine.ps (official tourism website of Palestine)

Near the Tombs of Phinehas and Abishua is the Cave of the Seventy Elders.  According to tradition, the bodies of the seventy elders who assisted Moses during the Exodus are presumably interred here.  Other nearby sites are covered in the section on Shechem.