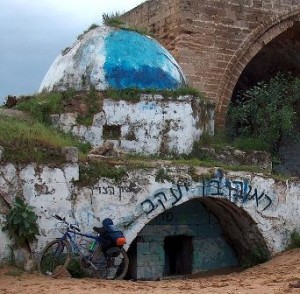 In the closing chapters of the Book of Genesis, as the stories of the Patriarchs come to an end, great attention is spent on the fate of Joseph, who was raised up above his brothers in the service of Pharoh.  It is known that his body was exhumed and solemnly returned to Canaan during the Exodus, and that he was buried in Shechem, possibly along with his sons Ephraim and Manessah.  But the Bible gives virtually no indication of what happened to the other sons of Jacob.  Presumably, as progenitors of the Twelve Tribes, they might also have been brought back to Canaan, and local traditions seem to support this idea.  At least eight sites throughout the Holy Land have been identified as the tombs of Joseph’s brothers, and though these are generally viewed with great skepticism, small numbers of the faithful visit every year.

In the wake of Joseph’s reunification with his brothers towards the end of the Book of Genesis, the patriarchal family relocated to the Land of Goshen in Egypt where they lived out the remainder of their years in peace and plenty.  Later, when Jacob was on his deathbed, he addressed his sons, as well as Ephraim and Manessah, and shared with them a vision of the future in which their descendents would form a mighty nation.  After his death, Jacob’s body, and presumably Leah’s as well, was brought back in a magnificent funeral procession to Hebron where he was buried beside his father and grandfather.

Joseph, who because of his high position was now nominally head of the family despite being Jacob’s second-youngest son, requested of Ephraim and Manessah that his body also be returned to Canaan and buried there someday.  This request was later carried out during the Exodus, when Joseph’s sarcophagas was exhumed from Egypt and brought to Canaan where it was reinterred at Shechem.  That is the last we hear of the sons of Jacob, and the Bible says nothing more about their subsequent history or final fate.

There are, however, unsubstantiated traditions concerning the children of Jacob.  Among these is that some, or even all, of the twelve brothers were returned to Canaan with Joseph, and though there is little evidence to support this, there is also no reason to think that it did not occur.  In later years, as each tribe became settled in the Promised Land, the sons of Jacob would likely have been buried in the various tribal territories.  The traditional tombs don’t always reflect this, geographically speaking:

Joseph of course is buried in Shechem, probably along with Ephraim and Manesseh.  There are no traditions or information concerning Levi, Naphtali or Isaachar, nor is there any tradition concerning Jacob’s daughter Dinah.  Interestingly, the sites of Jacob’s son’s tombs are generally based on Islamic tradition rather than on Jewish lore.

Even within the questionable framework of the above list, there is generally little to see at these burial sites.  Perhaps the most popular one is the Tomb of Reuben in Palmachim.  This old Muslim shrine, dating from the time when the surrounding village was the Palestinian town of Nabi Rubin, was abandoned for the better part of four decades before being rededicated as a Jewish holy site.  The tomb inside is marked by a red drape honoring Reuben as the firstborn son of Israel.  Despite both Jewish and Muslim reverence for the place, the tomb’s authenticity is questionable as the territory of Reuben was located beyond the Jordan River.

Of the remaining burial sites, one more is particularly noteworthy.  The Tomb of Zebulun is located in Sidon in Lebanon, and has been a recognized Jewish pilgrimage site at least as far back as the Middle Ages.  Geographically this site may be the most logical as Sidon was very close to Zebulun’s tribal territory.  The ancient Mediterranean port may even have been a tributary state of Zebulun for a time, and thus a natural location for the tribal progenitor’s tomb.

The Tomb of Reuben can be found in the town of Palomachim, approximately fifteen miles south of Tel Aviv.  It is in the care of a local kibbutz, and is open at the discretion of the local community.  The Tomb of Zebulun in Sidon is approximately fifty miles north of Haifa in Israel and twenty five miles south of the Lebanese capital of Beirut.  As of this writing, no further visitor information was available for either location.  Web: www.palmachim.org.il (Website of the Palmachim Kibbutz).

Although little else is known of any of the burial sites of the sons of Jacob or their descendents, one grandchild of Jacob does stand out from a Biblical perspective: Serach, the daughter of Asher, who is the only female mentioned by name among Jacob’s second generation.  According to tradition, she was the last survivor of the original migration to Egypt, and miraculously lived over a thousand years until the time of the Assyrian captivity.  The Tomb of Serach is supposedly located in Isfahan in Iran.