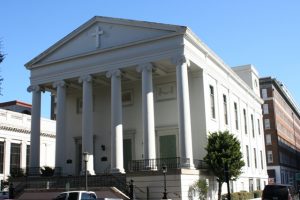 The Complete Pilgrim is currently working on a survey regarding the best religious sites in America. While those results are a ways off, the initial results have yielded some interesting facts about where some of the largest clusters of major religious destinations are to be found.  Not surprisingly, the largest clusters are to be found in bigger cities, with the heaviest concentrations of historic churches, cathedrals and synagogues along the Eastern Seaboard.  But there are some interesting unexpected destinations as well.

In part one of two articles, The Complete Pilgrim is looking at nine runner-up cities which boast at least three or four major religious sites each. Go check out the ones near you:

Houston is America’s capital of Protestant mega-churches. The city is practically overflowing with some of the largest church congregations in the country, including the biggest of all, Joel Osteen’s Lakewood Church; Woodlands United Methodist Church (not to be confused with Woodlands Church) and St. Martin’s Episcopal Church are home to two of the largest traditional congregations in the United States.  On a much smaller scale, just offshore from the city, is the tiny Mariner’s Chapel, where many of America’s ‘burials at sea’ take place.

New Orleans, the de-facto home of America’s premier pre-Lenten celebration, enjoys a venerable religious heritage if visitors can look beyond Mardi Gras. The city’s Cathedral Basilica of St. Louis, one of the oldest cathedrals in the country, is the seat of the Catholic Archdiocese of New Orleans; the Episcopal Christ Church Cathedral is home to one of the oldest Protestant congregations outside of the original thirteen colonies; while the Touro Synagogue is home to the oldest Jewish congregation outside of the original thirteen colonies.

Baltimore, one of the oldest major cities in the American colonies, was one of the first places the Roman Catholic and Methodist churches were introduced to the new country. The Basilica of the National Shrine of the Assumption was the first cathedral to be built in the original American territory; the Lovely Lane United Methodist Church stands on the site where Francis Asbury was ordained as America’s first Methodist bishop; and the St. James Episcopal Church was one of the first African American congregations south of the Mason Dixon line. 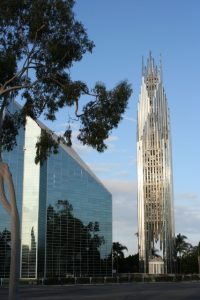 Los Angeles, the second largest city in the United States, boasts one of the most diverse populations of any city in the world, and its religious landscape is just as diverse. The ultra-modern Cathedral of Our Lady of the Angels is the seat of the Catholic Archdiocese of the city; the First AME Church of Los Angeles is home to one of the largest African American congregations in the United States; and the stunning Wilshire Boulevard Temple boasts movie moguls among its founders.  In the immediate vicinity of Los Angeles can be found the old Spanish Missions San Buenaventura and San Fernando Rey de Espana; the glass and steel Crystal Cathedral; and the Wayfarer’s Chapel, designed by the son of Frank Lloyd Wright.

Chicago, home to one of America’s largest and most vibrant Catholic populations, boasts more Roman Catholic Basilicas than any other city in America except New York, not to mention a number of cavernous cathedrals. Two of the finest are the Basilica of Our Lady of Sorrows and the Basilica of St. Hyacinth; the Holy Trinity Orthodox Cathedral is one of the seats of the Russian Orthodox Church in America, and was financed in part by Tsar Nicholas II before the Russian Revolution; the enormous Madonna Della Strada Chapel is the Jesuit-run chapel of Loyola University.  Oak Park on the outskirts of Chicago is home to the Unity Temple, one of the first churches designed by Frank Lloyd Wright. 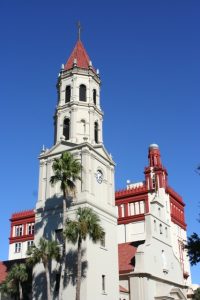 St. Augustine in Florida, the location of the first European settlement in America, boasts not one but two of America’s religious firsts. The Cathedral Basilica of St. Augustine is the seat of the oldest Catholic Parish (and oldest Christian congregation of any kind) in the United States; and the Avero House, which for a time was home to the first Greek Orthodox community in America, now houses the St. Photios Greek Orthodox Shrine; the St. Benedict the Moor School was financed by Katherine Drexel as a Catholic institution to serve the city’s African and Native populations; and Memorial Presbyterian Church was built by railroad tycoon Henry Flagler to serve the local vacation community, and is regularly counted among America’s most beautiful churches.

Savannah, one of the oldest cities in the southern colonies, boasts some of the oldest religious sites in the South. Christ Church, the seat of one of Georgia’s oldest Episcopal parishes, was once home to one of the great Protestant theologians, John Wesley, who went on to found the Methodist Church; the Cathedral of St. John the Baptist grew up around a Catholic parish founded by refugees from the Haitian revolution; the First African Baptist Church here is one of two claimants to being the oldest African Baptist congregation in America; and Mickve Israel Synagogue is home to one of the oldest Jewish congregations in the United States. 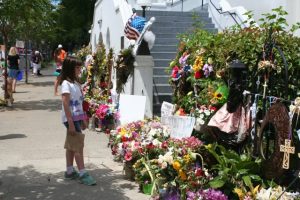 Charleston, while maybe not quite living up to its self-styled nickname “The Holy City”, is nevertheless home to a very impressive collection of must-see churches. It probably has more interesting religious sites than any other city of its size in the United States, a fact highlighted by city’s skyline: with most of the buildings in the historic center limited in height by law, a view of Charleston from the harbor reveals a veritable forest of church steeples.  Old St. Andrew’s Church is South Carolina’s oldest church and site of the first Episcopal parish in the state; the First Baptist Church was founded by refugees from Congregationalist New England in the 17th century; Kahal Hadosh Beth Elohim Synagogue is home to the second oldest Jewish Congregation in America; and Emanuel AME Church, home to the oldest African Methodist Episcopal congregation in the South, is now sadly remembered as the site of a mass shooting of its African congregants by a white supremacist in 2016. 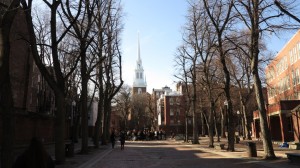 Boston and coastal Massachusetts is home to America’s oldest English speaking Protestant congregations. Two of these can be found in Boston proper: the Old North Church, and the Old South Meeting House. St. Stephen’s Church, one of the oldest Catholic churches in the northeast, was designed by famed American architect Charles Bullfinch.  Just outside of Boston can be found many other phenomenally historic churches, including the First Church in Salem of witch trial fame; the United First Parish Church in Quincy where several presidents are buried; the Old Ship Church and the Old Indian Meeting House, two of the oldest churches in the country; and the First Parish Church in Plymouth, whose congregation was founded by the Pilgrims.

Next week, the four top cities in America for religious sites.