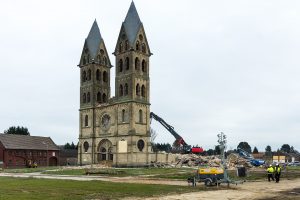 The Ain Dara Temple was an ancient Hittite religious site located in Northwestern Syria near the Turkish border. Built in the 13th century BC, it was one of the finest surviving Hittite archaeological sites.  Famed for its magnificent animal carvings and strange, enormous human footprints, it is believed to have been laid out along similar lines to Solomon’s Temple in Jerusalem.  In January of 2018, Turkish Air Force fighters bombed the town of Ain Dara, destroying much of the town and the bulk of the temple along with it.  More than half of this 3000+ year old structure now lies in ruins.

The St. Lambertus Cathedral was a traditional Roman Catholic church located in the city of Immerath in the heart of Germany’s Rhineland. Constructed in the 19th century to replace an earlier medieval building, it was heavily damaged in fighting during World War II.  However, it was repaired after the war and named a heritage monument in 1985.  Over the course of the last decade, the entire town of Immerath was acquired by a mining company and slated for demolition.  In January of 2018, the cathedral, one of the last buildings in the town still standing, was finally demolished in order to make way for a coal strip mine.

The Jokhang Temple is a Buddhist shrine generally regarded as the most sacred religious site in Tibet. Founded in the 7th century, Jokhang has had a long and eventful history.  After China’s annexation of Tibet in the 1950s, the temple was periodically closed and looted, eventually falling into disrepair.   The site was renovated in the 1970s, and was named a UNESCO World Heritage Site in 2000.  In February of 2018, a fire broke out and burned for several hours.  Although not destroyed, the temple was badly damaged.  Due to lack of news coverage and first-hand reports, the extent of the damage is currently not known.

The Alkhairaat Mosque, also known as the Floating Mosque, is a small but popular Muslim site located in the coastal city of Palu on the island of Sulawesi in Indonesia. It was constructed in the 1930s and dedicated to Datuk Karama who helped spread Islam to the island in the 17th century.  In September 2018, an earthquake followed by a tsunami struck Palu, destroying almost all of the city’s mosques.  While the Floating Mosque was not badly damaged initially, its foundation was compromised and the mosque is now sinking into the ground.  It is currently badly tilted, and the future of the mosque is now in doubt.

The Golden Lampstand Church in Shanxi in China was one of the largest Protestant churches in China. A relatively new congregation, the church building was only just completed in 2009.  However, concerns about the church, including possible lack of proper construction permitting, as well as not being correctly registered, led to the building being condemned.  In January of 2018, the Golden Lampstand Church was demolished.  Information on the current plans of the congregation was not available at the time of this writing.

This year’s full article, Historic Religious Sites Lost In 2018, was published on the website Patheos.com.  To read the full article, click here.