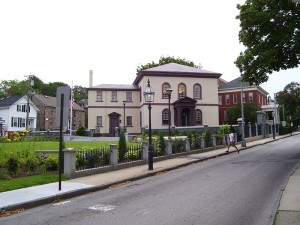 Around the middle of the 17th century, the first Jewish immigrants began arriving in the American colonies.  Although they settled primarily in New York and Charleston, the first permanent Jewish community in America was that of Newport, Rhode Island.  The Touro Synagogue of Newport has the honor of being the oldest synagogue still in use in both the United States and the western hemisphere.  Although the congregation of Newport has waxed and waned over the years, the Touro Synagogue has remained an important fixture in American Judaism.  It is still in active use today, with regular services for the small but devoted Jewish community of Newport.

The mid-1600s was a turbulent time for Jews living in the various European colonial territories.  Two related events occurring around the same time initiated what was essentially the beginning of Jewish immigration into the American colonies.  The first was the colonial war being fought around the world between Portugal and Holland; the second was the resurgence of the Spanish and Portuguese Inquisitions in the New World colonies.  In many places, the tolerant Dutch were in the ascendancy, occupying Portuguese colonies all over the world.  But unfortunately for the Jews in Brazil it was the Portuguese who were victorious there. 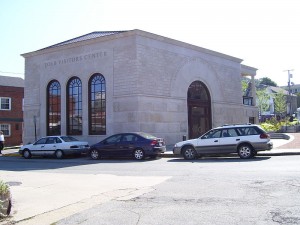 In 1654 the Jews of Recife, who had enjoyed religious freedom and tolerance in Brazil under the Dutch, were suddenly faced with a renewal of persecution.  These persecutions were in turn driven by the increasingly frantic actions of the Inquisition, who saw their cause defeated in Europe during the Thirty Years War.  In frustration they vented their religious wrath on those non-Catholics still residing in the Iberian Peninsula and in the colonies.  Facing the prospect of renewed oppression, many Jews fled Brazil and moved to other Dutch colonies.  Some of these went to the Caribbean, but most went to New Holland and New England.  One small group of fifteen Jewish immigrants arrived in Newport in 1658 via New Amsterdam.

Although there were technically Jews in New Amsterdam first, a delay in the formal recognition of their status by the Dutch governor resulted in the Newport Jewish community beating their New York counterparts to the finish line, but only by a very short time.  The question as to which Jewish community is older, that of New York or Newport, remains a bit controversial.  In any event, the Newport congregation was a little over a century old when they constructed the Touro Synagogue in 1763.  It quickly became the center of Jewish life in New England. 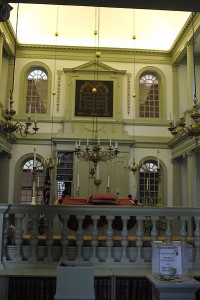 But as Newport went, so did its Jewish community.  After Rhode Island moved the state capital to Providence at the end of the 18th century, the city fell on difficult times, and many of the Jews left.  At one point the local Jewish population became so small that the synagogue was closed, its ownership turned over to the Congregation Shearith Israel in New York City and the building left in the care of neighboring Quakers.  The synagogue remained closed throughout mid-19th century, until a new wave of Jewish immigrants began arriving from Eastern Europe, boosting the local population.  In 1883 the synagogue was reopened again, and it has been open ever since.  The Touro Synagogue was designated a National Historic Site in 1946.

The Touro Synagogue was designed by the famous English architect Peter Harrison.  It is considered by some to be his signature work.  The synagogue combines his familiar English Colonial style with traditional Iberian Sephardic designs.  The grounds of the synagogue are currently being expanded and incorporated into an historic district, which will include several other buildings associated with the synagogue as well as a visitor’s center.

From the outside it appears more like a stately colonial mansion than a religious institution.  The synagogue sanctuary dominates the interior.  Although small, it is nevertheless an architectural treasure.  The woodwork in particular is an excellent example of colonial craftsmanship.  The twelve columns which support the balcony and ceiling represent the Twelve Tribes of Israel.

The Touro Synagogue is located in the heart of Newport, approximately eighty miles south of Boston a hundred and seventy miles east of New York City.  It is generally open daily from 1:00pm-3:00pm.  Religious services are held at 6:00pm on Friday evenings and 8:45am on Saturday mornings.  Admission is $5.00 for adults (free for service).  Web: http://www.tourosynagogue.org/ (official website)

Founded around the same time as the Jewish community of New York, the Touro Synagogue has always had close ties with the Congregation Shearith Israel.  The Spanish and Portuguese Synagogue is located on the Upper West Side of Manhattan in New York City.