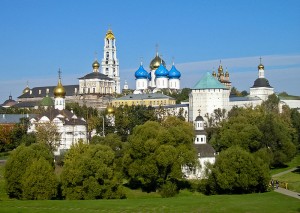 Between the 10th and the 15th centuries, the heartlands of the Orthodox Church gradually shifted northwards into Slavic Europe as the Byzantine Empire was lost piece by piece to Islam.  The twin disasters of the Mongol invasions and later the Ottoman conquest of Constantinople unexpectedly left the Patriarch of Moscow as the preeminent figure in the Eastern Orthodox Church in all but name.  The Monastery of Trinity-St. Sergius, which occasionally saw service as the Patriarchal seat of Russia, subsequently became one of the most important religious centers of the Eastern Orthodox Church.  For six centuries Russians and many other Slavic Christians have regarded the Monastery as the heart of their faith, the Eastern Orthodox Patriarchate in Istanbul and Mt. Athos in Greece notwithstanding. It is by far the most important Christian site in Russia, though St. Basil’s in Moscow receives more visitors.  The Monastery of Trinity-St. Sergius is a UNESCO World Heritage Site.

While Christianity in Russia dates back to the 10th century, the center of the Russian Church spent many years in the Ukrainian south.  However, several decades after the Mongols sacked the city of Kiev in 1240, the Russian Patriarcharchate was relocated further north to Moscow for political and security reasons.  Originally considered a political disaster, this actually gave the Eastern Orthodox Church an opportunity to strengthen their ties with distant frontier lands and reinivigorate the expansion of Christianity northward and eastward.  Many new churches were established in Moscow, Novgorod and other cities at this time.

In the mid-14th century a pair of Russian brothers gave up their aristocratic lives in order to seek out a more pious existence as hermits.  They established a small chapel in the forest outside of Moscow, and soon they were joined by others.  Within a few years the place was buzzing with religious aesetics, and by the early 15th century the Trinity Monastery, as it was then called, was one of the largest and wealthiest institutions in Russia.  Its close proximity to Moscow and the Russian Orthodox Patriarch made the Trinity Monastery extremely influential.  The ties to the Patriarchate were very close, and the monastery was often used by the Church as a retreat.

Trinity Monastery’s most famous resident was the monk Sergius, for whom the monastery was later renamed.  During the late 1300s, when the fortunes of Russia were at their lowest ebb, Sergius set out to unite the Russian nobles against the Mongols, who still occupied huge swaths of Russian territory.  He assembled a large army and led the Russians forces to victory at the Battle of Kulikovo.  Hailed as a national hero, Sergius returned to Trinity Monastery, which subsequently found itself in the national spotlight.  After his death, Sergius was canonized, and his tomb became Russia’s most sacred shrine.  Over the next two centuries the Church and the Tsars spent lavish sums embellishing the Trinity-St. Sergius Monastery.  Orthodox pilgrims came by the thousands to pay homage to the relics of Sergius.  Massive fortifications were also established around the monastery.

Twice during the 1600s, Trinity-St. Sergius was the site of desperate battles.  After taking shelter within the monastery in the 1680s, Peter the Great poured even more money into the place, making it one of the most spectacular and wealthy religious institutions in Eastern Europe.  Beginning in the 18th century, this wealth was slowly sapped by a succession of corrupt governments in search of money and property at the Church’s expense.  First the tsars then later the communists slowly chiseled away at the monastery’s holdings.  This continued until 1991, when a dramatic reversal took place after the fall of the Soviet government.  Finally freed from over seventy years of repression and persecution, Russian Christians have passionately re-embraced their religious heritage, and are returning to the long neglected Monastery of Trinity-St. Sergius in huge numbers.

The Monastery of Trinity-St. Sergius is a massive affair of thickly clustered buildings surrounded by scenic fields and copses of trees.  The brilliant white-brick structures are crowned with an assortment of high peaked roofs, towers and a small forest of golden steeples and Russian onion-domes.  Towering over the whole is a slender, graceful steeple topped with gold.  Among the numerous churches, dormitories, schools and sundry buildings of the monastery are a quartet of architectural masterpieces: the 15th century Church of the Holy Ghost; the 17th century Church of the Nativity of John the Baptist, added by the Stroganovs; the Church of the Virgin of Smolensk; and the residence of the Patriarch.

From a pilgrimage perspective, the Monastery has two highlights.  The first is Trinity Cathedral, built in the 15th century over the ruins of an earlier wooden church.  This white-brick structure is topped by two of the largest golden onion domes within the monastery.  The tombs of St. Sergius and St. Nikon are within.  The second is the Assumption Cathedral, the centerpiece of the complex built by Ivan the Terrible in the 15th century.  This towering structure is also dominated by a great golden dome flanked by four lower blue-tile domes.  Inside are the tombs of Boris Godunov and his family.  Among the frescoes of this church is the Last Supper by Ushakov.

The Monastery of Trinity-St. Sergius is located in the outskirts of the town of Sergius Posad, about fifty miles north of Moscow.  Because there is a considerable tourist infrastructure geared towards pilgrimage traffic to the monastery, it can be done as an easy day trip from Moscow.  The monastery is open daily from 10:00am-6:00pm.  Admission is free, though there is a charge for taking photos.  Web: www.stsl.ru (official website)

The area around Moscow is noted for its many monasteries, some of the largest and most beautiful in Eastern Europe.  Among them are the Znamensky Monastery and the Danilov Monastery, the latter of which is home to the Patriarch of Russia, and the Novodevichi Convent, where many of the city’s noble ladies were formerly educated.