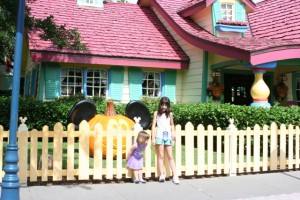 Walt Disney World has always been a place known for its innovation and new ideas. But since Universal Studios opened the Wizarding World of Harry Potter in 2010, it seems Disney has ramped up its efforts to a fevered pitch (one wonders if the Imagineers are ever allowed to sleep anymore). Many of these changes have been good, with some excellent new attractions, the banning of selfie sticks, and the removal (at long last) of the hideous Epcot sign at the top of Spaceship Earth and the distracting Sorcerer Mickey Hat at the Disney Studios.

But more than a few changes have been ill-conceived, and are bemoaned by many of Disney World’s long-time regular visitors. Much of the resort’s charm is now being demolished to make way for more exciting, more profitable and increasingly more sterile venues. While this is not a rant about longing for old lost Disney attractions, or old lost Disney ticket prices (yikes!), it is a nostalgic fan’s look at some of Disney World’s saddest losses.

This may have been one of the single most underappreciated experiences at Walt Disney World. Ever since the parks opened, guests who arrived at the monorail station at just the right time and who asked the conductors very politely could ride in the front (drivers section) of the monorail. This was especially fun when plunging in to the Contemporary Hotel or rounding Spaceship Earth. Unfortunately, in 2009 two monorails collided resulting in the death of a driver. The monorail cabs have been closed to guests ever since.

When Disney World introduced the Fastpass system in 1999, it was hailed by visitors as an incredible step forward in park appreciation. It was extremely egalitarian, and when used judiciously it could add many attractions to a day’s visit. Unfortunately, it was replaced by a much more restrictive Fastpass Plus system in 2013, which also highly favors guests who stay at on-property resorts and use the new Magic Band system. Long time regular visitors say the new system has contributed greatly to the fall of spontaneity at the parks in Florida.

No one does Disney better than Disney, which is why many long time visitors are starting to wonder why the Disney parks are opening their doors to other retailers. Disney experimented with this in the 1990s when they allowed McDonald’s fries to be sold at several in-park locations (this has since been discontinued). But now new vendors are appearing, including Starbucks, Sunglass Hut and Havaianas. These are replacing some of Disney’s old established retailers, including the various bakeries (which now sell Starbucks pastries).

For decades, Disney World was a great destination for vacation dining, with almost every type of restaurant available. Many first time visitors were surprised by the options, especially at Epcot and at the hotels. Up until a few years ago, that is, when many new vacation packages with dining plans were introduced. Since then, the menus at many of the best restaurants have been dumbed down, if you can even get a reservation (something that was rarely needed more than a day in advance, but now have to be arranged months out, even off season).

In 1988, the Magic Kingdom experienced one of its biggest expansions with the addition of Mickey’s Birthdayland. This later evolved into Mickey’s Starland and finally Mickey’s Toontown Fair. The various Toontowns were permanently closed in 2011 to make way for the Fantasyland expansion. While most of this was not a loss (in fact, the best attraction, Goofy’s Barnstormer, survived), the incredibly charming houses of Mickey and Minnie, which delighted young children for two decades, are now unfortunately gone for good.

Most of the time when Disney closes a major attraction, it is generally replaced with another attraction. Not so the Wonders of Life pavilion at Future World, which closed without explanation in 2007. Home to Epcot’s first thrill ride, Body Wars, Wonders of Life was very popular with visitors when Soaring over California, Mission Space and Test Track were not even on the drawing board. Also tucked away here was the cult favorite Cranium Command, one of the funniest attractions ever at Disney World.

No pavilion at the World Showcase has undergone more changes than Norway. Not one of the original countries, it was arguably the most well rounded upon its completion. It included a ride, a movie, a children’s play area (now gone), a museum, a bakery, and one of Epcot’s most underrated restaurants. Once one of Disney World’s best buffets, the Akershus, is now home to a mediocre princess character meal. The rest of the pavilion is now being transformed from a tribute to Norway into little more than a tribute to Disney’s monster hit film, Frozen.

Of Disney World’s four parks, none have undergone so many changes as the Disney Hollywood Studios. Originally named the Disney-MGM Studios, the park was designed to be an actual working studio. Several major films, including Mulan and Lilo & Stitch, were filmed here. However, film and television production have both been gone from the park for years, and all of the related attractions, including the Backlot Tour, the Studio Tour and the Soundstages are now permanently closed.

Every December, all of the Disney parks receive holiday makeovers that are truly delightful, and the best of these was the Osborne Holiday Light display at the Disney Studios. This mind-boggling walk-through attraction was a real treat for those who had the fortitude to visit Disney World over Christmas vacation. However, the backlot venue where the lights were set up is now being torn down to make way for new attractions. No backlot, no light show. 2015 will be the final year for the Holiday Lights.

For those who never visited Pleasure Island in its heyday, it may have been one of the most innovate night spots ever conceived, especially for those of us too old to go clubbing anymore. There were music venues to suit every taste (including a 70’s style discotheque that was always packed), as well as comedy clubs and other live entertainment. It was a very comfortable party environment for us older folks. Unfortunately, this once great adult play area has been repurposed for more restaurants and retail (exactly what Disney World does not need).

This entertaining indoor theme park was part of a major expansion of Downtown Disney in the 1990s. A unique facility at the time of its opening, it featured state of the art, high tech attractions as well as one of the world’s greatest retro arcades. Although somewhat dated now, it has remained a staple of Disney night life for nearly two decades. Technically still open, it will be closing in 2016 to make way for a new attraction, the NBA Experience. Many long time fans of the venue are lamenting its coming loss as a major mistake.

This one is for the real old timers and the real die-hards. Every Disney on-property hotel has a television set in every room that immediately tunes in to promotional videos. At one time there used to be several channels that ran about a dozen different fifteen minute videos, each giving pretty thorough coverage of a different park or subject (hotels, the cruise line, etc.). But for almost ten years now, all that is run are the world-famous “Stacey” top-list videos on a never-ending loop (periodically updated). We love Stacey, but we miss the pre-must-see list days.