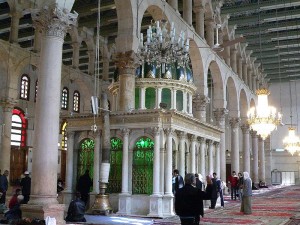 Long before Damascus rose to prominence as the Umayyad dynasty’s capital of the Islamic Caliphate, it was a major early center of the Christian faith.  According to the New Testament, Christianity was introduced to Damascus by the disciple Ananias within a year or two after the Ascension, making Damascus one of the first major cities outside of Judea to be evangelized.  Ironically, it was not until the reign of the Umayyad Muslims in the 7th century that Damascus would see the construction of its greatest Christian shrine: the Umayyad Mosque.  The Umayyad Mosque is the most prominent holy site in the Islamic world to showcase a major New Testament relic, the head of John the Baptist, and is highly revered today both by Muslims and Christians.  The Umayyad Mosque is part of the Ancient City of Damascus UNESCO World Heritage Site.

Damascus is one of the Levantine cities that lays claim to the title of the oldest city in the world, and most historians and archaeologists agree that if nothing else it is one of the oldest continually inhabited cities in the world.  For most of its early history Damascus was primarily a transit point clinging to a precarious existence in the frontier region between the empires of Mesopotamia, Egypt and Anatolia.  Its strategic importance grew during the wars between Assyria, Babylon and the Israelite kingdoms.  Damascus briefly rose to prominence during the Persian period as the provincial capital of Syria, but receded once again to quasi-obscurity following the founding of Antioch by the Seleucids.

Christianity arrived in Damascus at a very early date, perhaps as early as 35 AD.  Ananias, one of the Seventy Disciples, began evangelizing there in the years following the Pentecost.  One of the most pivotal moments in early Christian history took place here.  Paul, the great persecutor of the disciples of Jesus, received a vision of Christ on the road to the city and was overcome with blindness.  Shortly afterwards he arrived in Damascus where he was cured and formally converted to Christianity by Ananias.  Damascus became an important place of refuge for Christians during the Jewish revolts.  It is even possible that the Patriarchate of Jerusalem relocated to Damascus for a time in the 1st and 2nd centuries.

With the rise of Islam, Damascus found itself in the world spotlight.  Soon after the death of the Prophet Mohammed, Muslim armies swarmed out of Arabia conquering everything in their path.  The city of Damascus was taken and became the forward base for further campaigns against the Byzantine Empire.  The Caliph Omar chose Damascus as his new capital and within a few short years was one of the world’s largest cities.  The Umayyads adorned it with immense new public works including the Umayyad Mosque.  Taking a cue from the area’s many Byzantine churches, the Muslims decided to sanctify the mosque with an important relic, and brought the head of John the Baptist there, possibly from Herod’s fortress at Machaerus.

Following the arrival of the Abbasids, Syria waned in importance again, at least until the arrival of Christian Crusaders in the 11th century suddenly made Damascus a major strategic prize.  Damascus was a focal point in the standoff between Christians and Muslims in the 12th century, and it was from here that Saladin launched the counterattack that eventually drove the Crusaders from Jerusalem.  Over the next eight centuries, Damascus was ruled by a succession of Islamic dynasties, sacked several times by the Mongols, and was generally not a friendly place for Christians.  Nevertheless, the city’s ancient Christian community survived through centuries of trials and tribulations right down to the present day, held together in part by the tradition of John the Baptist and the mosque.

The Umayyad Mosque is a spectacular edifice.  Constructed before the more Persian-style Islamic architecture came into vogue, it appears much more like a Byzantine monastic compound than a mosque.  This is not unusual since it was largely constructed by Byzantine workers who previously worked on churches and cathedrals.  The three minarets were added at different times, exhibiting a variety of construction styles.  One of the minarets is dedicated to Jesus of Nazareth.  Despite the mosque’s ancient look, the building has been regularly repaired over the centuries, with a substantial renovation having been made after a fire in the 19th century.

The interior of the mosque is richly decorated, blending Christian and Muslim styles of many periods.  The head of John the Baptist is contained in an elaborate white-marble tomb located beneath the great dome.  The reliquary is visible through a series of latticework protected portals.  The Umayyad mosque is also home to the tomb of one of Islam’s greatest heroes: Saladin, the king who retook Jerusalem from the Crusaders.  Because he had given most of his money away to the poor, Saladin was laid to rest in a simple garden outside of the mosque’s walls.  A marble mausoleum was constructed in the 20th century as a gift of the German empire, but the body was never moved, and remains in a wooden coffin nearby.

The Umayyad Mosque is located in the heart of the Old City of Damascus, and is part of a cluster of major sites that are inundated with visitors and pilgrims on a daily basis.  It is an rarity from a tourism standpoint, as it is probably the greatest shrine in the Muslim world that permits non-Muslims to enter its holy precincts.  That said, extreme respect in the form of dress and behavior is expected.  The mosque is open daily from 9:00am-9:00pm.  The cost of admission varies throughout the year, from SL10 to SL50 depending on the season.  Web: Not currently available due to ongoing problems in the region

Although it has been a Muslim city for the better part of thirteen centuries, Damascus has been home to a substantial Christian population for nearly two thousand years.  Old Damascus has a large Christian quarter that dominates the eastern half of the city.  The Chapel of Ananias supposedly stands on the place where Ananias baptized Paul, and St. Paul’s Chapel marks the spot where Paul escaped from the city in a basket over the wall.  There are at least half a dozen other shrines throughout the region that claim to be home to the relics of John the Baptist.  There is a pretty good chance that the body was once interred in the Tomb of John the Baptist in Sebaste in Palestine, while the head was probably kept for a while at the Fortress of Herod at Machaerus.  John the Baptist is still highly venerated at both of these places.