The United States is home to hundreds of sites of Christian interest, both religious and historic.  These generally consist of important churches or academic institutions such as seminaries or museums.  But there is another phenomenon that is more or less unique to America, particularly the South, that draws countless religious visitors annually, and that is the religious park, for lack of a better term.  These unique places, which usually feature historical or Biblical recreations of people and sites, run the gamut from intimate garden settings to major theme parks.  Often controversial, these sites nevertheless draw large crowds and are an integral part of roadside Americana. 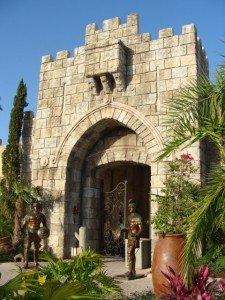 The Holy Land Experience, located in Orlando’s theme park zone, is a living museum of sorts recreating life in Jerusalem during the late Second Temple period.  Opened in 2001, this hybrid theme park-Christian retreat is one of the world’s most unique religious attractions.    An interesting window into the early days of Christianity, it features architectural recreations of the Jaffa Gate, the Garden Tomb, the Second Temple, the Church of All Nations and the Qumran Caves where the Dead Sea Scrolls were discovered.  There are also live performances and exhibits related to the life of Jesus of Nazareth and the early Church.

From an historical and academic standpoint, the highlight of the park, and one of Orlando’s best-kept secrets, is the Scriptorium.  This exhibit, opened in 2002, was a gift of a wealthy businessman with a passion for Judeo-Christian antiquities.  The Scriptorium is a veritable museum of writings and artifacts that span centuries of Christian history.  It houses one of the largest collections of Biblical artifacts in the United States. 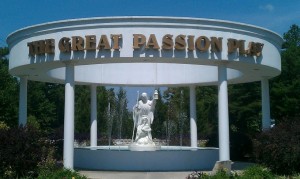 The Great Passion Play is another of America’s unique Christian institutions.  A combination of attractions and exhibits, it began in the 1960s with the construction of the Christ of the Ozarks, the largest statue of Jesus of Nazareth in the United States.  Later additions include a recreation of the East Jerusalem Gate, a Memorial Chapel, a Sacred Arts Museum and a Bible Museum.  The latter has among its collection a first edition of the King James Bible and an original Bible published and signed by the founders of the Gideons.

The main attraction is the Great Passion Play, the largest traditional Passion Play in the United States and the most-attended outdoor drama in American history.  The play, which generally runs from May through October, is performed in a giant amphitheater carved out of a mountain on a stage large enough to house a football-field sized recreation of Jerusalem.  The set includes reproductions of the Great Temple, the Palace of Pontius Pilate and Golgotha.  The first performance took place in 1968 and it has been running ever since.

Christ in the Smokies 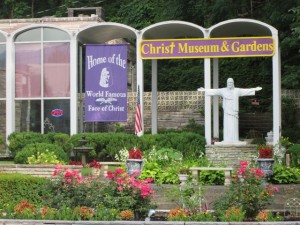 Christ in the Smokies

Christ in the Smokies Museum and Gardens is a popular Christian attraction which has been a staple of the Gatlinburg-Pigeon Forge vacation area for many years.  Perhaps best described as a Christian art exhibit, the museum features a beautiful collection of dioramas recreating scenes from the Bible.  Viewed in order, these scenes essentially tell the story of Jesus of Nazareth.  Most famous and popular is the three-dimensional rendering of Leonardo DaVinci’s masterpiece The Last Supper.

Beyond the dioramas, the museum’s exhibits include an excellent collection of coins from the ancient Holy Land as well as other interesting Bible-related artifacts.  The grounds of Christ in the Smokies are also home to an excellent, contemplative garden which melts into the backdrop of Great Smoky Mountains National Park. 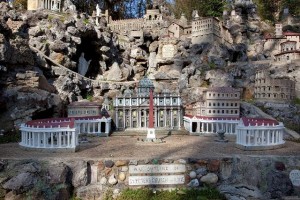 The Ave Maria Grotto may be one of the greatest labors of love in the history of American Christian art.  The grotto is the result of the work of Brother Joseph Zoettl, a Benedictine monk from Bavaria who settled in the United States in 1892.  Brother Joseph, who settled in Alabama’s St. Bernard Abbey in 1892, went on to become locally famous for his artistic creations.  In 1933, using donations of marble and other materials, he began to meticulously hand craft replicas of the world’s great Catholic shrines.  By the time of his death in 1958, he had created over a hundred of the world’s greatest hand-made miniature models of churches.

Joseph Zoettl’s artwork has been popular since his lifetime, and in 1934, due to the large number of visitors, the grotto was formally established.  It features models of churches and shrines from around the world, many set dramatically into a hillside.  The centerpiece, known as Jerusalem in Miniature, features a recreation of ancient Jerusalem.  Other popular models include St. Peter’s Basilica, the Sanctuary of Lourdes and the Tower of Babel. 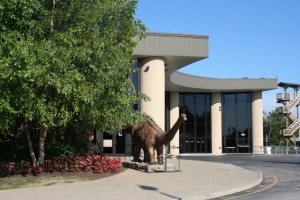 The Creation Museum is certainly one of the most controversial religious sites in the United States, at least from a scientific standpoint.  Although it caters primarily to a Christian audience, the main theme of the museum is early Biblical history, with a focus on Creationism.  It features exhibits supporting the Biblical age of the world at six thousand years, including controversial depictions of humans coexisting with dinosaurs.  Lauded by its supporters and vilified by its detractors, there is at least a level consensus that the exhibits themselves are well done and offer an interesting window into the first few chapters of Genesis.

Not too far away from Petersburg, the owners of the Creation Museum are in the process of developing a second, related attraction: the Ark Encounter.  This project, a full-scale recreation of Noah’s Ark, will feature a ride-through of early Biblical history, as well as depictions of the pre-Flood world and the Tower of Babel.  After years of delays, ground is expected to break soon.  As of this writing no opening information was available for this attraction.