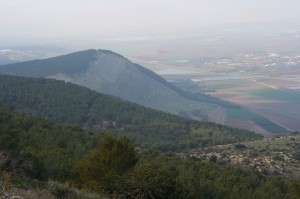 The Valley of Jezreel, also known as the Plain of Megiddo, or Armeggedon, is the Holy Land’s most famous battlefield.  Countless armies have raged across this vast, open, and highly strategic valley, from the Egyptians and Canaanites in the 15th century BC to the British and Ottomans during World War I.  The best-known Biblical conflict to have occurred at Megiddo was the war between the Canaanites and the Israelites under the leadership of the prophetess Deborah, the only battle in the Bible in which a woman plays a prominent military role.  However, this is not Jezreel’s most famous conflict.  That honor, according to Biblical prophecy, goes to a battle that has not yet taken place: the titanic Battle of Armeggedon, which will presage the return of the Messiah at the end of times.  The Valley of Jezreel is part of the Biblical Tels UNESCO World Heritage Site.

The Valley of Jezreel is an immense plain which stretches out from the slopes of the Carmel Mountains in the west towards the Jordan River Valley in the east.  Its strategic importance has been recognized since the arrival of the area’s first inhabitants.  The first great battle to be fought there took place around 1480 BC, when an expeditionary force from Egypt crushed a coalition of Canaanite kingdoms in what was the world’s first reliably documented battle.  The Egyptians passed through the area again a few centuries later on their way to fight the Hittites at the Battle of Kadesh.

The most famous Biblical battle to take place at Jezreel occurred sometime around the 12th century BC.  During the days of the Judges, the Prophetess Deborah was called upon to defend the northern tribal territories from a powerful marauding Canaanite army.  Assisted by Barak, an able general from the tribe of Naphtali, she assembled an army of ten thousand warriors at Mount Tabor on the western side of Megiddo.  From there she led the Israelites to victory, routing the Canaanites and securing the northern frontier of Israel, at least until the next crisis.  The Jezreel Valley would later be the site of several major battles between the Israelites and their neighbors, notably between the Kingdom of Judah under Josiah and the Egyptians in the 10th century BC.

Over the course of centuries, virtually every army that conquered the Middle East passed through the Jezreel at some point: the Assyrians, Babylonians, Persians, Greeks, Seleucids, Romans, Byzantines, Arabs, Crusaders and others.  The last major battle at Megeddo took place in 1918 between the British and the Ottomans during one of the final campaigns of World War I.  Since 1948, the Valley of Jezreel has been solidly under Israeli control.  Interestingly, no major battles of the Arab-Israeli conflict have occurred there.

But the seemingly endless parade of armies and conflicts that have already passed through the Jezreel Valley pale in comparison to what is yet to come.  According to the Book of Revelation, the final book of the New Testament, it is at Tel Megiddo that all the armies of the Earth will be gathered for history’s final conflict.  “Then the spirits brought the kings together in the place that in Hebrew is called Armegeddon” – Revelation 16:16.  Although the exact details are unclear, it is suggested that the army gathered at Armegeddon will be destroyed there in a spectacular display of God’s wrath.  Whether or not this cataclysmic event will actually take place remains to be seen.  However, few historians doubt that the Valley of Jezreel will see war again in the future.

The Valley of Jezeel stretches from Mount Tabor and the hills near Nazareth to the east and Mount Carmel to the west.  The great pass runs from north to south, allowing easy passage between the coastal cities to the north and the central hill country to the south.  Megiddo technically refers to Tel Megiddo, a long-inhabited hill that commands a wide view of the valley.  On a good day the city of Nazareth is visibile from the top.

Tel Megiddo and part of the surrounding area have been incorporated into the Megiddo National Park.  This park includes a number of archaeological sites, including excavations of at least twenty layers of cities that once existed in the area.  One of these dates back to the period of King Solomon and includes a large stable complex that is estimated to have once housed over four hundred horses.  The park also has a museum which tells the history of the area.

Meggido is located on the northern edge of the West Bank, about thirty miles south of Haifa and seventy miles north of Tel Aviv.  Tel Megiddo and the Megiddo National Park are open daily at 8:00 am (closing times vary throughout the year, with early closings on Fridays).  Admission is NIS23 for adults, NIS12 for children.  Web: http://old.parks.il (official website)

Mount Tabor, which dominates the eastern side of Meggido, was also famous for its battles.  In addition to being the marshalling place for Deborah’s army, Jewish armies later fought major battles there against the Seleucids and the Romans.  The Tomb of Deborah and the Tomb of Barak can be found at Tel Kedesh in northern Israel.