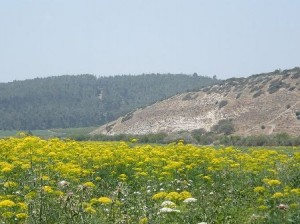 The history of the Israelites in ancient Canaan was one of nearly constant warfare.  But of the more than one-hundred battles discussed in the Hebrew Bible, none are better known or more proudly remembered than the Battle of Elah.  It was in this valley on the road from Bethlehem to Gath where the shepherd boy David challenged the mighty champion of the Philistines and became a hero in the eyes of Israelites forever afterward.  This event not only turned the tide of the endless war against the Philistines in favor of Israel, but set the stage for David’s ultimate rise to kingship.  A fortress was later constructed near the site of the battle, both to protect Jerusalem from further Philistine encroachments as well as to commemorate the victory.  The ruins, and the stream from which David retrieved his five famous stones, can still be visited to this day.

Around the time that the Israelites were invading Canaan from the east, the people known as the Philistines were expanding along the coasts and driving inland.  Eventually the two aggressive powers met, and what ensued was one of the longest wars in world history.  Based on what is known of the conflict, the two sides seemed to be in a perpetual state of balance.  The Israelites had the advantage of numbers and religious fervor, while the Philistines enjoyed superior geography, weapons and organization.  Neither side managed to maintain the upper hand for very long.  Other than occasional respites, the war went on more or less continually from the first clashes in the 12th century BC until both sides were crushed by the Assyrians four hundred years later.

The greatest period of fighting took place in the 11th century BC.  The Israelites, divided and poorly led, suffered a series of crushing defeats that left much of the southern and central tribal territories vulnerable.  The Philistines were briefly halted by Samuel’s victory at Mizpah, but it was clear to the prophet that a true king with a professional army would be necessary to deal more decisively with Israel’s enemies.  Saul of the tribe of Benjamin was chosen.  He raised a small army, most likely composed of Benjaminites and Ephraimites, and routed an unprepared force of Philistines at the Battle of Michmash.

In the ensuing campaign, the Israelites liberated much territory and drew some of the more powerful tribes, including Judah, into the conflict.  The Philistines regrouped and marched with a large force into Judah.  The two armies met at the Valley of Elah, where a stalemate ensued.  Eventually the Philistines, desirous to put an end to the conflict with minimal further losses, offered to settle the battle in single combat, choosing the enormous Goliath as their champion.  For many weeks Goliath’s challenge went unanswered.  Then one day, a young shepherd named David came to Elah with food for his father and brothers, who all served in Saul’s army.  He heard of the challenge and accepted it on behalf of Israel.  The rest is history.

David defeated and killed Goliath in what is considered to be one of the greatest upsets of all time, and became the hero of the people and army of Israel in the process.  The Philistines, demoralized, were driven from the field, and David was rewarded with an appointment to Saul’s court.  Although the war with the Philistines continued into the reigns of David and Solomon and well beyond, Elah marked a major turning point after which the threat of Israel’s enemies in the west was significantly diminished.

Other than a road that cuts through the area and a few scattered buildings, the Valley of Elah today looks pretty much as it did in David’s time: a sparsely vegetated valley with a dry streambed running through the middle.  During heavier rain periods, the stream reappears and the valley blooms.  The camp of the Israelites stood to the north, while that of the Philistines was to the south.  Virtually no archaeological evidence of the battle or the encampments has survived.

However, not far away are the archaeological remains of Azekah.  These ruins are in good condition, especially the foundations of the round wall which once encircled the city.  These fortifications have been dated back to the period of David and Solomon, one or both of whom almost certainly had them constructed.

The Valley of Elah is located approximately fifteen miles west of Jerusalem near what was once an ancient road to Ashkelon and the Mediterranean coast.  The Field where the battle was fought and the ruins of Azekah are both open sites.  No other visitor information was available as of the time of this writing.  Web: www.visitpalestine.pl (official tourism website of Palestine)