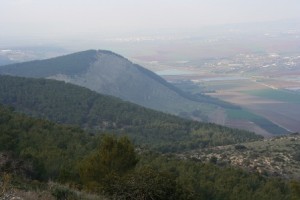 The Valley of Jezreel, also known as the Plain of Megiddo, is Israel’s most famous battlefield.  Countless armies have raged across this vast open and highly strategic valley, as early as the Egyptians and Canaanites in the 15th century BC and as recently as the British and Ottomans during World War I.  According to Christian theology, the valley’s most famous struggle, the prophetic and titanic Battle of Armeggedon, has not even taken place yet.  The best-known Biblical conflict that has already occurred at Megiddo was the war between the Canaanites and the Israelites that occurred during the days of the prophetess Deborah, one of the few conflicts in ancient times in which a woman had a prominent military role.  Megiddo is part of the Biblical Tels UNESCO World Heritage Site.

The Valley of Jezreel is an immense plain which stretches out from the eastern slopes of the Carmel Mountains towards the Jordan River Valley.  Its strategic importance has been evident since the arrival of the area’s first inhabitants.  The first great battle to be fought there took place around 1480 BC, when an expeditionary force from Egypt crushed a coalition of Canaanite kingdoms in what is believed to be the world’s first reliably documented battle.  The Egyptians passed through the area again a few centuries later on their way to fight the Hittites at the Battle of Kadesh.

The most famous battle that took place at Jezreel in Biblical times occurred sometime around the 12th century BC.  During the days of the Judges, the Prophetess Deborah was called upon to defend the northern tribal territories from a powerful army of marauding Canaanites.  Assisted by Barak, an able general from the tribal territory of Naphtali, she assembled an army of ten thousand warriors at Mount Tabor on the western side of Megiddo.  From there she led the Israelites to victory, routing the Canaanites and securing the northern frontier of Israel for the time being.

Although the Canaanites had lost control of the Jezreel Valley, the Egyptians apparently never gave up on the idea of annexing the area for their own purposes.  Their armies returned in the 10th century BC, and again in the 9th century BC.  The second time they were merely passing through on their way to Mesopotamia when the Judean King Josiah unwisely decided to deny them passage.  He paid for the decision with his own life and the lives of many of his soldiers.

Over the course of centuries, virtually every army that conquered the region passed through the Jezreel Valley at some point: the Assyrians, Babylonians, Persians, Greeks, Seleucids, Romans, Byzantines, Arabs, Crusaders and others.  The last major battle at Megeddo took place in 1918 between the British and the Ottomans during one of the final campaigns of World War I.  Whether or not the cataclysmic battle of Armeggedon will actually take place here remains to be seen.  However, few historians doubt that the Valley of Jezreel will see war again in the future.

The Valley of Jezeel stretches from Mount Tabor and the hills near Nazareth to the east and Mount Carmel to the west.  A great pass runs through it from north to south, allowing easy passage between the coastal cities to the north and the central hill country to the south.  Megiddo technically refers to Tel Megiddo, a long-inhabited hill that commands a wide view of the valley.  On a good day the city of Nazareth is visible from the peak.

Tel Megiddo and part of the surrounding area have been incorporated into the Megiddo National Park.  This park includes a number of archaeological sites, including excavations of at least twenty layers of cities that once existed in the area.  One of these sites dates back to the period of King Solomon and includes a massive stable complex that is estimated to have once housed over four hundred horses.  The park also has a museum which tells the history of the area.

Tel Megiddo and the Megiddo National Park are located in northern Israel, approximately fifty miles north of Jerusalem and twenty miles southeast of Haifa.  The park is open daily at 8:00 am (closing times vary throughout the year, with early closings on Fridays).  Admission is NIS23 for adults, NIS12 for children.  Web: www.parks.org.il (official website of the Israeli National Parks Service)

Mount Tabor, which dominates the eastern side of Meggido, was also famous for its battles.  In addition to being the marshalling place for Deborah’s troops, Jewish armies fought major battles there in later centuries against the Seleucids and the Romans.  The Tomb of Deborah and the Tomb of Barak can be found at Tel Kedesh in northern Israel.