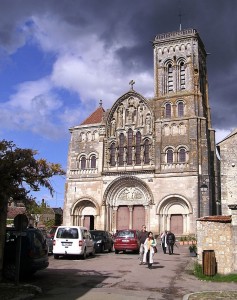 Exactly how the relics of Mary Magdalene found their way to Vezelay in France is not certain, and in fact Vezelay is only one of a number of cities to claim them.  Nevertheless popular opinion supports the Vezelay tradition, which seems to be unofficially recognized by the Roman Catholic Church.  While neighboring Spain and Italy claim Apostolic tombs, the relics of Mary Magdalene are France’s closest connection to the New Testament, and for much of the late medieval period Vezelay was one of that nation’s most important pilgrimage destinations.  In light of the recent fascination with Mary Magdalene in popular culture, Vezelay is once again becoming an extremely popular Christian tourist destination.  Vezelay Abbey, where the Basilica of St. Mary Magdalene is located, is a UNESCO World Heritage Site.

The story of Mary Magdalene in the Bible is one of the most enigmatic and controversial.  Some Biblical scholars believe that most of the various Marys mentioned in the Bible, other than Jesus’ mother, are all one and the same Mary Magdalene, while others believe that she may have been as many as three separate people.  More importantly, the exact nature of her personal relationship to Jesus has been a topic of great interest in recent years.  Whatever the truth is, it is clear that Mary Magdalene was a critically important follower of Jesus of Nazareth, she was with him when he died on the Cross, and it was to her that Jesus first revealed Himself after the Resurrection.

Legends of Mary Magdalene present her as a missionary, work that took her across the sea to Rome and Ephesus, where she died in the company of John.  But here she may be confused with the Virgin Mary, who is also believed to have relocated to Ephesus before she died.  According to one story supported by the Orthodox Churches, the relics were later brought from Ephesus to Constantinople at the end of the 9th century.  The more popular story supported by the Catholics is that she traveled to France in the company of Joseph of Arimethea, eventually settling in either Marseilles or Vezelay.

Sometime around the middle of the 11th century, monks visiting St. Maximin’s Church in Provence discovered a sarcophagas with markings suggesting the occupant was Mary Magdalene.  Overjoyed at the ‘proof’ that Mary Magdalene had indeed been in France a thousand years earlier, the relics were transferred back to their abbey at Vezelay.  The region of Provence jumped at the opportunity to promote the region as a pilgrimage destination, and soon the area was dotted with churches and shrines in Mary Magdalene’s honor.

Vezelay subsequently became the preeminent Christian shrine in medieval France.  The city and abbey would later be the site a number of other important Christian events.  It was in Vezelay that Bernard of Clairvaux called for a Second Crusade against the Saracens in 1146 AD.  It was also one of Thomas Becket’s homes during his exile from England.  In the 16th century, a mob of angry Huguenots destroyed many of the city’s Catholic shrines.  In time, Vezelay’s claim to Mary Magdalene was challenged.  Rival St. Maximin discovered the ‘true’ tomb still within its walls towards the end of the 13th century in an attempt to reestablish its own preeminence.  But it is Vezelay Abbey which is generally recognized and revered by the majority of Christian visitors to the region.

The Abbey of Vezelay is built on the site of several earlier churches which had been sacked on at least two occasions, first by the Moors and than by the Normans.  The current structure was built by Benedictine monks and dates from the 9th century.  The church exterior is a plain, Romanesque structure that was considerably damaged nearly a millennium later during the French Revolution.  It underwent a substantial restoration in the mid-19th century.  The façade is dominated by a main arched double-doorway flanked by two smaller entranceways, and crowned by a belltower offset over the right portals.

The interior of the church is impressive.  The floorplan consists of a single long, narrow nave that stretches from the entrance to the altar with no side alcoves.  This design focuses the attention of visitors on the front of the main sanctuary and the white marble alcove behind the altar.  What is left of Mary Magdalene’s relics is contained in a reliquary beneath this altar.

The Abbey of Vezelay stands on a hillside overlooking the City of Vezelay, about one hundred and fifty miles southeast of Paris.  It is open July-August from 7:00am-9:00pm and the rest of the year from sunrise-sunset.  Admission is free.  Web: http://basiliquedevezelay.cef.fr (official website)

The region’s other major site closely connected to the relics of Mary Magdalene is the Dominican St. Maximin’s Church along the southern coast of France near Avignon.  A cave near Marseilles, La Sainte Baume, is believed by some to be the place where she spent thirty years as an early ascetic and where she eventually died, though this conflicts with most other accounts of her life.