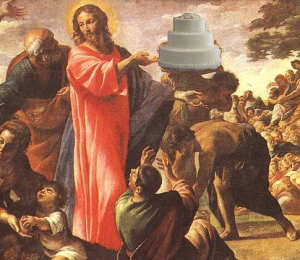 “The Miracle of the Cake”

This last week, the case regarding the baker who refused to make a wedding cake for a gay couple based on religious grounds began moving towards the United States Supreme Court.  While The Complete Pilgrim will not comment on the merits of this case, The Complete Pilgrim’s wife did.  In an effort to lighten the tone of comments on a Huffington Post article, she wrote the following:

“Jesus was a carpenter so of course he would not have baked cakes. He lacked the skill set.”

What followed was an avalanche of replies, most of which were similarly humorous, but a few where some people did not get that this was meant to be funny.  The resulting comment thread was pretty hilarious.  Here are some excerpts.  Enjoy!  (please note that all of the following comments were left by individuals on the Huffington Post website and do not reflect the views of The Complete Pilgrim; inappropriate comments were excluded).

“Lacked the skill set to bake a cake? A cake? Something a nine year old can do, would be too difficult for Jesus; is that what you just wrote?”

“I think he was being sarcastic. But I bet Jesus would have built them a fabulous armoire.”

“Something SOME nine-year-olds can do – IF they’ve been taught how to do it by their mothers. People 2000 years ago weren’t the multitaskers they are expected to be today.”

“Since cakes were NOT available if at all not surprising A Baker would make the equivalent of Naan, Pita or Focaccio BREAD . Cake? Nope”

“It is not a Betty Crocker, like the ones you make….but Jesus Stewart would have made the cake….”

“I bet you can’t bake a cake. They don’t use Pillsbury in a bakery.”

“Obviously you have no clue about the skill set needed to make a cake from scratch without using a boxed mix. There’s the skill needed to know HOW to mix the ingredients in the cake, HOW to mix the different ingredients in the filling, HOW to make the frosting, HOW to create the decorations, HOW to make the fondant, and the artistic skill necessary to put all the elements together in a pleasing manner. I am a skilled home baker, and I have done catering, but I DON’T have the skill set necessary to make a wedding cake.”

“Haha! People arguing over whether Jesus could make a cake”

“2000 years ago, when the mythical Jesus was reported to have lived, yes. They didn’t have Betty Crocker or Easy Bake Ovens back then.”

“It is ridiculous to assume that a Bronze Age carpenter would have any clue how to bake a cake in the modern sense. Only men that were bakers by profession would have any clue, and then they would be honey cakes, not raspberry filled yellow cakes with buttercream icing. Sheesh!”

“While Any man who could change water into wine so that the guests would not be inconvienienced would apparently have no trouble whipping up cakes of any flavor and size. He just had the knack, don’t ya know?”

“They didn’t have Betty Crocker back then…”

“I’m pretty sure that the mention of the easy bake oven was removed from the Bible during the Nicaea gathering. They didn’t want to spoil the magic.”

“Didn’t have any Duncan Heinz back then.”

“This thread is as silly as I’ve seen them get.”

“He wouldn’t bake the cake because he brought the wine”

“Jesus fed thousands with a couple of loaves and fishes, and turned water into wine…. I think a wedding cake would be pretty bloody easy, after all that”

“A 9-year old couldn’t bake and decorate a wedding cake, no. Unless someone wanted a basic sheet cake.”

“Because I’m sure a universal, omnipotent god is soooooooo concerned about a confection of flour, sugar and eggs.”