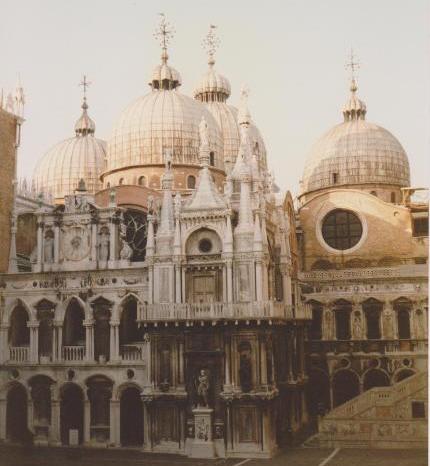 The celebration of Carnival is a tradition that dates back many centuries.  It has gone from being a simple season of feasts in the Middle Ages to the massive public celebrations we now know in the 21st century.  Observed in the days leading up to Ash Wednesday, which marks the beginning of the Christian season of Lent, Carnival parties can be found in many places, especially where the Roman Catholic Church has a presence.  These range from small dinner gatherings of friends and family, to immense and raucous street bacchanalias numbering in the hundreds of thousands.  However Carnival is celebrated, it is, at the end of the day, associated with religious observations.  So where to go after the party is over?

The Carnival of Venice is one of the oldest such celebrations in the world, and the largest and most famous in Europe.  Inaugurated in the 12th century, it was outlawed in 1797 and reinstated in the 1970s.  The use of masks in Carnival celebrations probably originated here, and the city is world famous for its costumes.  For those who are religiously observant, many head out on Ash Wednesday to St. Mark’s Basilica.

St. Mark’s is the city’s premier cathedral, and one of the most historically important churches in the world.  Constructed at a time when Venice was one of the world’s wealthiest metropolises, this absolutely magnificent domed edifice is adorned in gold leaf and iconic artwork.  It houses the tomb of St. Mark the Evangelist, one of the only known burial sites in the world of a New Testament figure.

The Carnival of Rio de Janeiro is the largest and arguably the most famous pre-Lenten celebration on Earth.  This is befitting, considering that Rio de Janeiro was for many centuries capital of Brazil, currently home to the largest Roman Catholic population in the world.  It is estimated that around two million people from around the globe celebrate Carnival every year in Rio.  Many revelers fill the city’s churches once Lent begins, with the historic Old Cathedral being a prime destination.

The Old Cathedral of Rio de Janeiro is one of the oldest churches in South America.  Completed in 1761, it served as the seat of the archdiocese for nearly two centuries, until replaced by the new Metropolitan Cathedral in 1976.  It served for a time as a royal chapel when the Portuguese royal family lived in exile here.  It is regarded by many in the city as Rio’s most historic and beloved church.

The Mardi Gras celebration of New Orleans is the largest and most popular Carnival Celebration in the United States.  Tracing its roots back to the early French Catholic settlements along the Gulf Coast, early Mardi Gras feasts took place as far back as the late 17th and early 18th centuries.  The regular celebration of Carnival in the city of New Orleans began in 1837, and his been an annual event, with a few exceptions, ever since.

After the revelries are over, many Catholic residents of the Big Easy attend Ash Wednesday services at the Cathedral-Basilica of St. Louis, King of France (not to be confused with the similarly named church in St. Louis, Missouri).  This palatial cathedral, located in Jackson Square and completed just before the American Civil War, is regarded by many religious architecture enthusiasts as one of the most beautiful churches in the United States.

The Carnival of Cadiz is the most popular pre-Lenten celebration in Spain, and probably the best known such event in the Spanish speaking world.  Celebrated since the 16th century, it has periodically been banned, both because of its exuberant nature as well as the political slant that Carnival takes on in Cadiz.  While it is just as energetic and colorful as these street parties go, the Cadiz celebration is also known for its many musical and comedy performances.

Cadiz Cathedral is the major church in the city.  Built in the 18th and 19th centuries, it was constructed with the wealth brought back from the New World at the height of the Spanish colonial empire.  It was one of the final great cathedrals completed n Spain during this period.  For nearly two centuries it has served as the focal point of Cadiz’ Ash Wednesday observances.

The major celebrations of Carnival are typically associated with Southern Europe and Latin America.  However, there are a few noteworthy exceptions in Northern Europe, notably the Carnival of Binche in the Walloon region of Belgium.  Although not nearly as big or as well known as its counterparts in Spain and Italy, the celebration in Binche has been recognized by UNESCO for its cultural importance.

Although Belgium has a largely secular population, many observant celebrants of Carnival find their way to the magnificent and historic Collegiate Saint-Ursmer Church.  This edifice, constructed in part in the 9th century, is one of the oldest churches in the Low Countries.  It towers above the city walls and red roofs of Binche’s buildings as it has since the Middle Ages, and is a major destination on Ash Wednesday.