September is almost here, and so is college football season. For die-hard collegiate football fan the question is, “How can we get a little divine assistance in reaching bowl season?” Well, fear not. The Complete Pilgrim has you covered. From the SEC to the PAC12, some of the best college chapels and churches in the United States can be found at Division 1-A schools. So throw on your colors, paint your faces and come sneak in a quick prayer before the big game at these top collegiate chapels! 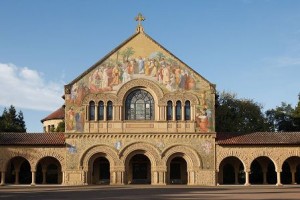 Schools with academic reputations as impressive as Stanford rarely have a sports program to match. But the Stanford Cardinal held its own in the tough Pac12 conference in 2014 (8-5), going to and winning the Foster Farms Bowl. Maybe they could do even better with a visit to the Stanford Memorial Chapel. This Romanesque Church, which looks as though it has been lifted straight out of Renaissance Italy, is an architectural rarity among collegiate chapels. Major restorations after the 1906 and 1989 earthquakes make this chapel a survivor, and should be an inspiration to any serious Cardinal fan. 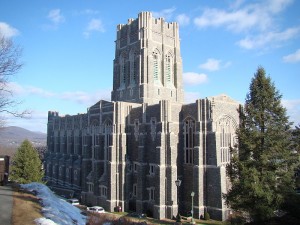 The Black Knights are one of the greatest institutions in college football, though they have faded in recent decades as a major contender, and had a less-than-stellar 2014 season (4-8). This is despite the fact that West Point is served by four (!) separate chapels. The main church, the Gothic-style West Point Cadet Chapel, is one of the finest university cathedrals in the United States, and boasts one of the world’s largest pipe organs (over 20,000 pipes at last count). Maybe this will bring the Knights some more divine inspiration in 2015. 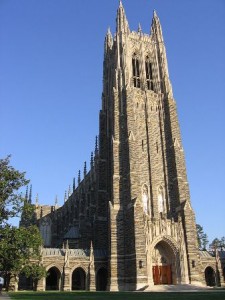 The Blue Devils enjoyed a great run in 2014 (9-4), making it all the way to the Sun Bowl. Perhaps their success was due to the fact that this ACC powerhouse is home to the spectacular Duke Chapel. Duke Chapel, a gothic behemoth with an absolutely jaw-dropping 200-foot bell tower, is regularly named among the most spectacular college chapels in the United States. One of the largest churches on a university campus, it can seat almost two thousand people. Unfortunately, the chapel is currently closed for renovations. Hopefully this will not effect the 2015 season. 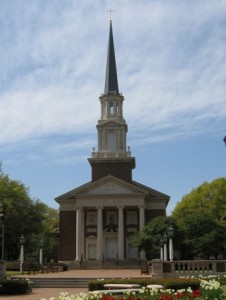 2014 wasn’t exactly the best year for the Mustangs (1-11). If anybody could use a little divine intervention, it’s this venerable institution of the AAC. Fortunately, SMU is home to Perkins Chapel, one of the finest examples of Georgian-style church architecture in the United States. Completed in 1951 and renovated in 1999, it recalls the magnificent religious building designed by Christopher Wren in the 17th century. 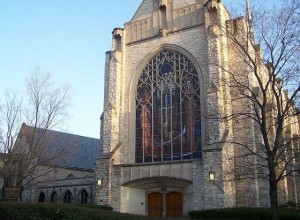 The Wildcats had a mediocre season in 2014 (5-7). Clearly the student body at this historic Big 10 school needs a little churching up. Thankfully the Northwestern Campus is home to the Alice Millar Chapel and Religious Center. This imposing Gothic style church was a gift to the university by Foster McGaw and houses two large sanctuaries as well as educational and other worship facilities. The main sanctuary, the Millar Chapel, boasts a 150-foot steeple and spectacular stained glass. 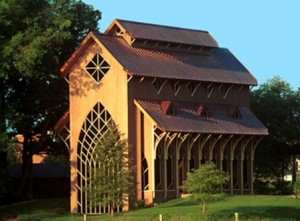 The SEC is one of the most hotly contested conferences in college football. Despite this the Gators are regular contenders, and in 2014 (7-5) they made it to and won the Birmingham Bowl. Maybe they could do even better this year if more of the student body pays a visit to the Baughman Center. This modern architecture masterpiece is small but stunning, and doubles as both a meditative retreat as well as a performing arts venue. Its immense windows flood the chapel with light and highlight the lush vegetation and lakeside setting just outside. 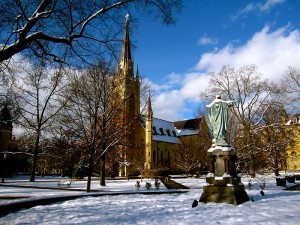 Basilica of the Sacred Heart (wikipedia.com)

No essay on college football or collegiate chapels would be complete without mentioning the Basilica of the Sacred Heart at Notre Dame. As America’s best known Catholic university, the cathedral and the Fighting Irish football program are virtually synonymous. Arguably the most storied program in collegiate football, the team had a decent year in 2014 (8-5), going to and winning the Music City Bowl. The chapel is arguably the finest Catholic place of worship on an American college campus, and there is a full-fledged mass here every weekend, no doubt attended by most of the Irish’ biggest fans.