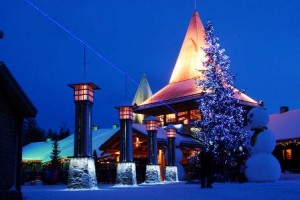 The phenomenon of Santa Claus can be traced back to ancient times. Originating with traditions associated with the Greek bishop St. Nicholas and pagan figures of Northern Europe, the idea of ‘Father Christmas’ emerged at some point in the later Middle Ages.  He in turn was processed and repackaged by American marketing firms in the 19th century into the figure we know today as Santa Claus.  Across the world, Santa Claus is celebrated in many ways, from sacred and historic shrines to destinations of imagination and whimsy.  Here are five of the best places that every Santa Claus officianado should visit:

The Church of St. Nicholas in Myra in Asia Minor was one of the great bishoprics of the Eastern Orthodox Church until the region was conquered by Abbasid Muslims early in the 9th century.  Originally constructed in the 6th century on the site of an earlier church where Nicholas once worked and preached, the current church has been renovated on numerous occasions, including a major effort in the 1800s under the patronage of the Russian Czars.  By the late 20th century, the Church of St. Nicholas was little more than a splendid ruin.  However, that is now changing.  The Turkish Ministry of Culture has recently undertaken a massive restoration effort on the church in conjunction with the Orthodox Patriarchate of Russia.

Despite its ancient age and poor condition, a significant portion of the original 6th century structure is still standing.  The interior of the church features ancient art and paintings on the walls as well as surprisingly intact tile mosaics on the floor, all of which may date back to the original construction.  The highlight of the church is without doubt the sarcophagas that once contained Nicholas’ relic.  Although the body is long gone, the empty tomb is still highly venerated by the local Christians.  A cheesy plastic statue of Santa Claus on a pedestal watches over the site.

The Basilica of St. Nicholas in Bari was one of the great pilgrimage cities of the Middle Ages, thanks to its convenient location in a major Crusader port.  Construction on the basilica began in 1087 AD, a few years after the relics of Nicholas were rescued from Myra and brought to Bari for ‘safety’.   It took about a hundred years to complete the work, and, with the exception of several restorations, the church largely dates to the 12th century.  Architecturally it is something of a cross-breed of Byzantine and Gothic designs, due to the availability of both Byzantine and Norman architects in the city at the time of its construction.  The white brick cathedral is imposing but austere in appearance from the outside.  There are, however, a few relief pictures of Nicholas carved onto the outer walls.  A statue of Nicholas, donated to Bari by the Russian Orthodox Church in 2003, stands facing the cathedral from across the square.

The cathedral interior appears smaller than the outside would suggest due to the narrowness of the nave, the unusual central support arches and the soaring ceiling. Much of the interior was redone in the 17th century in a more lavish Renaissance style.  The walls, chapels and altar are all thoroughly adorned with a blend of Orthodox and Catholic artwork, including an extensive collection of icons.  The tomb of Bona Sforza, a former Queen of Poland, is located in the main church.  The star attraction, the tomb of St. Nicholas, is located in a crypt in the lower chapel beneath the main sanctuary.

Of the numerous Santa Claus villages, castles, workshops and the like that dot the northern countries of the western world, the Santa Claus Village of Rovaniemi, Finland is the reigning champion.  Literally straddling the invisible line of the Arctic Circle, the city of Rovaniemi is out of the way, but the pine-forested, often snow-covered landscape is the ideal setting for the home of the jolly old elf, and as close to the North Pole that most people will ever get.  The tradition of Santa Claus in Rovaniemi dates back at least to the early part of the 20th century, when it was told to Finnish children that Santa resided in Lapland, home to his famous herd of reindeer.  The Santa Claus Village, however, was not founded until 1985, and has been growing ever since.

The main sites of the Santa Claus Village are the Santa Claus Office, where Santa makes daily appearances throughout the year; and the Santa Claus Post Office, which receives hundreds of thousands of Santa letters from around the world every Christmas season.  There is also a Christmas House with museum-type exhibits on the holiday and its celebration in Finland.  There is also the Santa Park, where visitors can see Santa’s elves at work; a reindeer Park with herds of real reindeer; and Ice World, a fantasyland carved from ice.  The final touch: a line running right through the middle of the village which marks the location of the Arctic Circle.

It is a well known fact that Santa Claus lives and works at the North Pole.  But where does jolly old St. Nick begin his annual Christmas Eve journey around the world?  In Central Asia, according to the Kyrgyzstan national tourism bureau.  In 2007, the Swedish engineering company Sweco did a light-hearted study designed to lay out the most efficient route for Santa Claus to take on his annual world tour.  The study, which apparently did make use of advanced algorithms used to streamline shipping routes, identified the country of Kyrgyzstan as the optimal starting point.  Officials of Kyrgyzstan’s tourism industry seized on the idea, and immediately set about finding ways of promoting their country as a Santa Claus destination.

On Christmas Eve, 2007, mountaineers from Bishkek set out to climb a peak in the nearby Tien Shan Mountains.  Upon reaching the summit, they planted a flag of Kyrgyzstan and christened the mountain ‘Santa Claus Peak’ as free-roaming yaks looked on (the naming of mountains is a local tradition; ironically, Vladimir Lenin Mountain is not too far away).  Santa Claus Peak is now the unofficially recognized starting line for St. Nicholas’ annual race around the world.

Okay, you’re probably not going to visit this one.  But no discussion of Santa Claus’ home would be complete without the North Pole.  Its difficult to say exactly where the tradition of St. Nicholas ends and the tradition of Santa Claus begins, but a good place to start looking is here.  Exactly how Santa Claus came to make this isolated, desolate place his permanent residence has been explored by the good folks at Rankin Bass Studios as well as many others.  However, that this tradition has been a prevailing part of the Santa Claus legend for almost two centuries cannot be denied.  For true believers, Santa’s workshop is but a quick reindeer flight or train ride to the Arctic Circle.

The idea of the North Pole has been around since at least the 1500s, not too long after European explorers finally abandoned the long-standing flat Earth concept.  Located in the midst of a vast, frozen wasteland of ice that literally floats on the Arctic Ocean, many explorers of the 1800s tried to find their way to this distant frontier.  It was not conquered until the early 20th century, possibly on foot by Robert Peary in 1909, definitively by plane by Richard Byrd in 1926.  However, no explorer has ever found the North Pole’s Holy Grail: Santa Claus’ home and workshop.  The legend of Santa residing at the North Pole has been around since the early 19th century, though its not exactly certain how this idea got started.  While the exact location and nature of Santa’s true home are still a matter of conjecture, it will always be the North Pole in the minds of children the world over.