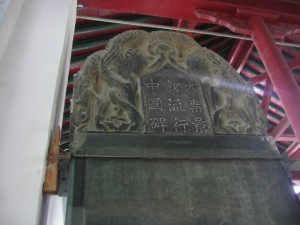 Because of the complete triumph Islam in the Middle East in the early Middle Ages, it is easy to forget that in its early centuries, Christianity had spread throughout much of Asia.  By the 5th century it was a major, if not the predominant, religion of Mesopotamia and Persia, and Christian missionaries had penetrated into India and China even before the Prophet Mohammad was born.  Although the Assyrian Church of the East, once the dominant Christian denomination of Asia, has been on a long slow decline since the advent of Islam, it nevertheless survives to the present day, and its legacy can be found scattered in unusual places throughout Asia.  One of the most interesting ancient artifacts of these Asian Christians is an 8th century monolith known as the Nestorian Stele.  It is kept in the Forest of Steles Museum in Xi’an, and is a must-see for Christian visitors to China.

According to tradition, it was Thomas the Apostle who introduced Christianity to Asia in the 1st century AD.  There are many legends concerning his ministry in Edessa in what is now Syria, from where he eventually made his way eastwards through Mesopotamia and Persia.  In these regions beyond the frontiers of the Roman Empire, Thomas established the See of Seleucia-Ctesiphon, which was possibly the world’s largest Christian patriarchate for a time, surpassing even those of Rome and Antioch, at least until Constantine Christianized the empire.  The See of Seleucia-Ctesiphon would later form the territorial base of the Assyrian Church of the East.

Throughout the first four centuries of Christianity, the Christians of Mesopotamia and Persia nominally came under the authority of the Patriarch of Antioch, one of the five great patriarchal seats of the Roman Empire.  However, doctrinal differences, compounded by the neverending geopolitical squabbles between the Roman and Persian empires, led to a sundering of the church in the 5th century.  In a series of councils in 410 and 424 AD, the church in the Persian Empire formally renounced any connection to Antioch or any other Roman patriarchate, resulting in the first great permanent schism in the universal Church.

This schism was condemned but otherwise went unchallenged by western Christians, though practice of Assyrian Christianity was banned as heresy in the Roman Empire.  The Assyrian Church did not concern itself with the decisions and councils of its Roman compatriots, and focused instead on spreading the Gospeal throughout Asia, which it did very successfully.  By the 7th century, the Assyrian Church was the dominant religion of Mesopotamia and Persia, and Christian communities existed as far abroad as Tibet and India.  However, the coming of Islam was a terrible blow to Asia’s Christians, one from which the Assyrian Church never recovered.

Despite the new challenge of Islam, Christianity did continue to survive in Asia.  Sometime around the 7th century AD, the first Christian missionaries made their way into China.  According to the Nestorian Stele, the establishment of a Christian Church in China was permitted by imperial writ in 635.  Christianity was suppressed in China in the 9th century, but revived again during the Mongol period.  According to legend, it was the Assyrian Christians who endeavored to affect an alliance between the Mongols and the Franks against the Islamic Caliphate.  Christianity in China faded in later centuries, as it did in most of the rest of Asia, until it was crushed altogether by the Mughals under Timur.  Although tiny remnants of the Assyrian Church of the East cling to life in Iraq and Iran, little is left of the ancient Christian communities of China besides the stone monuments which they left behind.

The Forest of Steles is actually an exhibit located in the Xi’an Beilin Museum, but most people refer to it simply as the Forest of Steles Museum.  The museum is housed in a Confucian Temple which dates from the 10th century.  It is believed that the Temple began accumulating steles, large engraved stone monoliths, shortly after its construction.  The collection has now grown to over three thousand, filling every square inch of the place.

The stele known as the Memorial of the Propagation in China of the Luminous Religion from Daqin, or the Nestorian Stele for short, is located in the museum’s second room.  A limestone block towering nearly three meters in height, it was carved in the year 781 AD and describes early Christianity in China.  The text engraved upon its surface talks about the church’s recognition by the Chinese emperor in 635; Christian missionary work and communities in China; and references to the Bible.

The Xi’an Beilin Museum is located in Xi’an, China, approximately six hundred miles southwest of Beijing.  It is a public institution which is open Tuesdays through Sundays from 8:30am-6:00pm.  The cost of admission is US $3.  Web: www.beilin-museum.com (official website)

Although the Assyrian Church has waned over the centuries, there are still a small scattering of Christian sites to be found in China and Central Asia.  Among them is another ancient Assyrian Christian stele which can be found in a Sanpen Mountain located in the Fangshan district of Beijing.