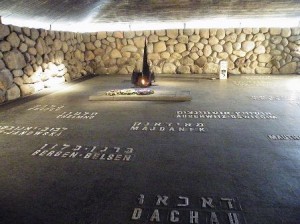 The catastrophic events of the Holocaust are so closely tied to the rebirth of the State of Israel that Hitler’s murder of six million European Jews will always be an integral part of the nation’s zeitgeist.  It was the Holocaust that at last convinced the surviving Jews that there would never be peace for them among the other peoples of the world.  It is the memory of the Holocaust that drove the Jews to defiantly establish their own homeland in Palestine and to defend it with a ferocity never before seen in history.  Because of this the Holocaust is vividly remembered and memorialized here.  Yad Vashem, near Mount Herzl, is Israel’s great national shrine to the tragic events that the Jewish people must not and will not ever forget.

At the end of 1945, as the true magnitude of the Holocaust became known to the world, the plight of the Jewish survivors became one of the first great tests of the new world order.  Unfortunately the new world order failed miserably.  Throughout Europe, especially in the communist east, the handful of Jews that were left still suffered persecution and in some cases even more massacres.  Throughout the Middle East, anti-Semitism was on the rise.  Both the British Empire and the United Nations failed to address these problems, and continued to make things worse by perpetuating the failed policies that predated the war.

The Jews, organized by various Zionist organizations and Jewish partisan groups, at last took matters into their own hands.  Hundreds of thousands of Holocaust survivors were smuggled into Palesine in the operation known as Berihah, or The Flight.  Because of the suffering and loss that these new immigrants had already endured, they became among the most devoted and fierce defenders of Jewish Palestine.  When the war of independence broke out in 1948, these desperate people with virtually nothing left to lose formed the undefeatable backbone of the Israeli army.

The idea of a memorial to commemorate the victims of the Holocaust existed even before Israel was formally established as a nation.  According to some accounts, the earliest plans were already being discussed not too long after the Wannsee Conference in 1942.  Funding was underway within months of Germany’s surrender.  The foundation of the Yad Vashem was formally established by the Israeli Parliament in 1953, the Martyrs and Heroes Remembrence Authority.

Yad Vashem is without peer the largest and most touching Holocaust memorial site in the world.  It became the prototype from which scores of Holocaust museums around the world were inspired.  In the last few years Yad Vashem was completely rebuilt and vastly expanded.  The new building is not only an inspirational museum, but an architectural masterpiece.  Along with the nearby National Cemetery, the Yad Vashem is without a doubt the most important and poignant Jewish pilgrimage destination of Israel’s modern age.

The Yad Vashem Museum is a massive complex of exhibits and memorials that covers the Mount of Rememberence next to Mount Herzl and the National Cemetery.  Originally founded in the 1960s, the site was vastly expanded and rededicated in 2005.  The main museum consists of a series of exhibition halls that begin deep underground and progress upwards, symbolically representing the rebirth of the Jewish people and the modern State of Israel.  Perhaps the most memorable gallery is the Hall of Names which individually commemorates as many of the six million Jewish Holocaust victims as are known.

There are a number of other memorials located at Yad Vashem as well.  The most famous of these is the Avenue, or Garden, of the Righteous Among the Nations.  This memorial commemorates those non-Jews who risked everything, including their lives, to rescue their Jewish neighbors from Nazi atrocities.  To date more than twenty-two thousand heroes from over forty nations have been honored here.  Another poignant and heart-wrenching site is the Valley of the Communities, which remembers all of the old Jewish towns, villages and ghettos which were obliterated during the war.

The Yad Vashem Museum is located on Mount Zikaron on the westernmost outskirts of Jerusalem not too far from Mount Herzl.  Perhaps it is fitting that this greatest of all Holocaust Memorial sites is within sight of the Old City.  Like Moses looking out over the Promised Land from the summit of Mount Nebo, the souls of the victims of the Holocaust can look out from Yad Vashem over the Old City, but are destined never to sit foot therein.  The Yad Vashem Museum is open Sundays through Wednesdays from 9:00am-5:00pm; Thursdays from 9:00am-8:00pm; and Fridays from 9:00am-2:00pm.  Admission is free.  Children under the age of ten are not permitted to enter the museum.  Web: www.yadvashem.org (official website)

Jerusalem also remembers the victims of the Holocaust in the Forest of the Martyrs, a forest of six million trees, one for every Jew who died at the hands of the Nazis.  There is also an earlier memorial site on Mount Zion known as the Chamber of the Holocaust, a precursor to the Yad Vashem Memorial.  Nearby, in the Catholic Cenetery, is the Gravesite of Oskar Schindler, arguably the most famous of all of the Righteous thanks to Stephen Spielberg’s poignant film Schindler’s List.  There is also the Ghetto Fighter’s House in the Galilee region dedicated to those who fought in the Warsaw Ghetto Uprising.